President Kais Saied is facing a growing wave of opposition from civil society and political actors as he takes new powers and attempts to transform the political system. 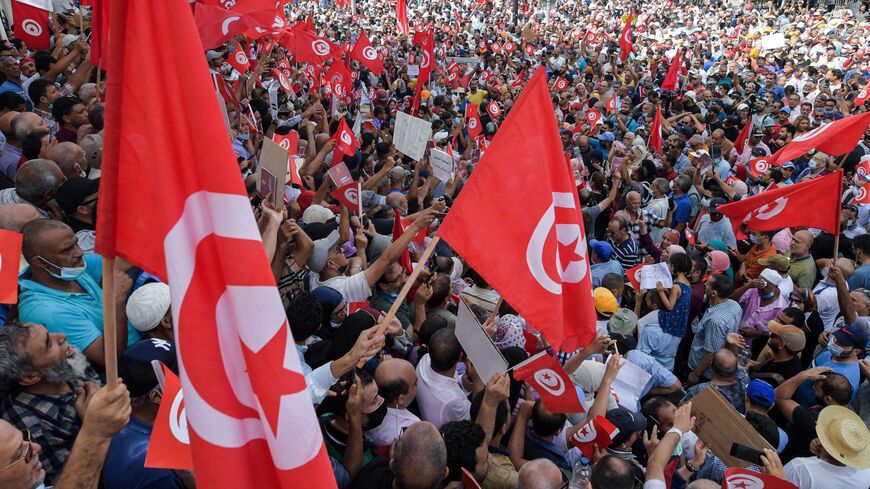 Demonstrators chant slogans during a protest in Tunisia's capital Tunis on Sept. 26, against President Kais Saied's recent steps to tighten his grip on power. - FETHI BELAID/AFP via Getty Images

TUNIS - Tunisian President Kais Saied's move to amass further power has heightened fears that a coup is underway in the young democracy and sparked strong opposition from party leaders and civil society.

On Sept. 22, Saied issued a presidential order that grants him sweeping executive and legislative powers, two months after he suspended parliament and ousted the government under emergency provisions.

The new measures shutter parliament indefinitely, abolish a key law-monitoring body, and disregard much of the country’s 2014 constitution, effectively allowing Saied to rule by decree until further notice.

Amna Guellali, deputy director for the Middle East and North Africa at Amnesty International, told Al-Monitor that Saied’s actions are "a threat to human rights and the democratic process.”

“His seizure of even more powers on Sept. 22 deepens this concern. Without the existence of any checks and balances, there is a real risk of a return to authoritarianism,” Guellali said.

In addition to directing policy and legislation, Saied announced he will reform the country’s 2014 constitution with the help of his own appointed commission. His goal, many believe, is to enshrine a political system that will reduce the role of parliament and strengthen the presidency.

“One thing is for sure,” Lamine Benghazi, programs coordinator of Lawyers Without Borders, told Al-Monitor, “We are heading towards a change of the constitution outside of the constitutional framework, and that is something that we cannot accept in civil society.”

Many other political and civil society forces, including some previously aligned with Saied, shared such concerns.

The powerful Tunisian General Labour Union, which had expressed cautious support for Saied after his July 25 decisions, described the president’s latest move as a threat to democracy.

"The UGTT rejects the president's monopoly on amendments and considers this a danger to democracy," the union said on Sept. 24. “There is no solution to the current crisis other than consultation, partnership and dialogue on the basis of national principles, Tunisia’s sovereignty, and service.”

A group of 15 local and international Tunis-based NGOs also signed a joint letter warning that Saied’s concentration of power is a “step towards despotism,” while Tunisian political parties of all stripes came out against the president’s maneuvers.

For now, however, Saied is bolstered by broad support from the public, who largely applauded his July 25 move to sideline a political class viewed as corrupt and inept in the midst of mounting economic and health crises. In mid-August, a poll found that 81% remained in favor of his extending the suspension of parliament.

Still, there are signs that this support could be waning and that pockets of dissent are growing. On Sunday, several thousand protesters gathered in Tunis to decry Saied’s power grab, the first major rally opposing him since his election and one that far outnumbered a counter-rally in his defense the day before.

The anti-Saied crowds, peppered with Tunisian flags on the city’s main boulevard, chanted slogans demanding he “be removed” from office and calling for the “fall of the coup.”

Saied, a former law professor, has defended his exceptional measures as necessary to protect national security, vowing he will not become a dictator. However, he has yet to fulfill his promise to appoint a new prime minister and rebuffed calls by civil society groups to chart a return to the democratic path. Arrests of MPs, who have all been stripped of their legal immunity and salaries during the crisis, have also fueled rights concerns.

Most troubling to many, meanwhile, is Saied’s lack of a clear economic plan. Since July 25, living standards have continued to decline and public finances, long saddled by debt, are barreling towards disaster. The political crisis threw negotiations with the International Monetary Fund (IMF) off track, jeopardizing critical funds the country needs before the end of the year. If Tunisia does not secure at least $4 billion, it may not have enough money to pay public salaries or loans.

Saied’s economic vision is a “major question mark,” said Benghazi. “He hasn’t expressed himself on this point, and time is playing against him.”

Guellali predicted the president’s popularity could decline if the economy suffers and he continues to pursue his political vision at the expense of Tunisia’s democratic gains.

“It’s only a matter of time until people realize that what’s at the heart of their demands is not at the center of Saied’s preoccupations,” she told Al-Monitor.

Benghazi added: “We are already witnessing a steady and slow decrease of (Saied’s) popularity since the 25th of July...I think in the near future, his popularity could decrease day by day as people fail to see a change in their daily life.”

Courts and the law
Institution building