Abbas' threat comes as the Biden administration shows little appetite for taking on the prospect of peace between the Israelis and the Palestinians. 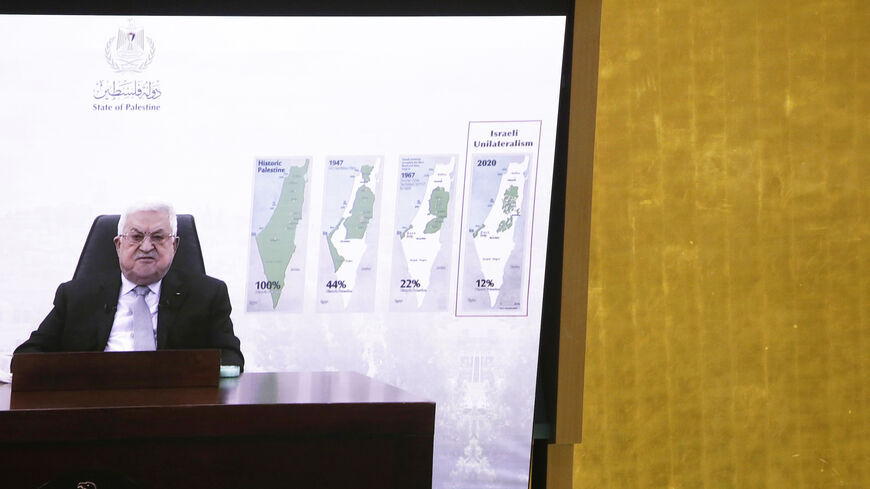 Palestinian Authority President Mahmoud Abbas warned on Friday that his administration would no longer recognize Israel if the Jewish State did not stop occupying Palestinian territory taken since the 1967 war within one year.

"We must state that Israel, the occupying power, has one year to withdraw from the Palestinian territory it occupied in 1967, including East Jerusalem,” Abbas said during a virtual speech before the United Nations General Assembly in New York Friday.

Palestinians see East Jerusalem as the capital of a future state, as stipulated by the 1993 Oslo Accords. But the peace process between Israel and the Palestinians has been on life support for years, with little stopping Israel’s expansion of settlements inside Palestinian territory in violation of international law.

Abbas, whose stagnant two-decade rule suffers worsening legitimacy among Palestinians, called on UN Secretary General Antonio Guterres to convene an international conference this year to work towards resolving the conflict with Israel.

“If this is not achieved, why maintain recognition of Israel based on the 1967 borders?” Abbas said.

Gilad Erdan, Israel’s Ambassador to the UN, blew off the Palestinian president’s rhetoric, saying Abbas "proved once again that he is no longer relevant.”

"Those who truly support peace and negotiations do not threaten delusional ultimatums from the UN platform as he did in his speech,” Erdan said.

The Palestinian Authority relies heavily on Israeli and US cooperation. Speaking before the UN earlier this week, President Joe Biden reaffirmed Washington's commitment to a two-state solution to the conflict, but noted that goal was a "long way" off.

Abbas' speech comes two days after Biden’s pick for ambassador to Israel, Thomas Nides, balked during his Congressional confirmation hearing at the prospect of pushing the Israelis and Palestinians towards a solution.

“As President Biden said yesterday at the UN, there is a view that a two-state solution is a goal to try to attempt to achieve. I don’t think anyone believes that is a achievable in the next couple of weeks," Nides told members of the Senate's foreign relations panel.

"I do believe that we need as a government to continue to create the pathway to achieving that," he said.

Nides on Wednesday highlighted the Biden administration’s restoration of aid to the West Bank and Gaza people, after it was cancelled by the prior Donald Trump administration, as a tool that "helps Israelis by keeping things calm, not only in the West Bank."

Israel’s new government is seeking to patch things up with Biden’s party as a new wing of progressive Democrats have taken a critical stance towards Israel’s policies and US support.

The US House of Representatives this week briefly removed $1 billion in funding to replenish Israel's Iron Dome air defense system before reinstating it.