As public anger over a lack of justice grows, the United Nations said many children remain traumatized by the August 2020 explosion and that citizens who required assistance after the event are still in need. 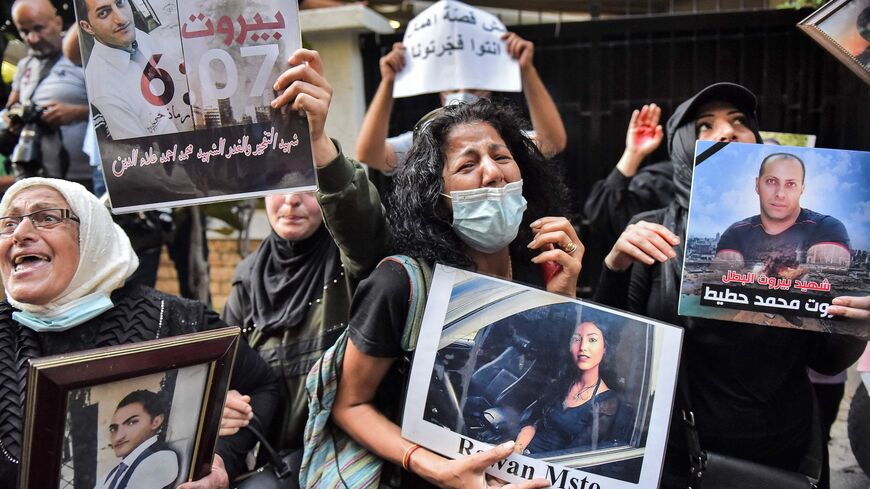 Demonstrators and families of the Beirut blast victims chant during a protest outside the residence of Lebanon's interior minister in the Qoraitem neighborhood of western Beirut on July 13, 2021. - AFP via Getty Images

Many Lebanese and Syrians are still suffering from the Beirut port explosion a year after the tragic event, the United Stations said on Tuesday.

The UN Children’s Emergency Fund released a survey for the one-year anniversary of the explosion. The blast took place on Aug. 4, 2020, when 2,750 tons of the flammable fertilizer ammonium nitrate caught fire in a warehouse in Beirut’s port and exploded. More than 200 people were killed and thousands more injured. More than 200,000 people were affected by the damage.

The survey was conducted in July among Lebanese and Syrians in Beirut who were affected by the blast, a UNICEF spokesperson told Al-Monitor. The survey found that 34% of families had children who were still exhibiting signs of psychological distress from the incident. Moreover, 43.6% had at least one family member who lost employment because of the explosion. Of those who lost jobs, 51% still have not resumed work.

Of those families who requested assistance such as cash or food following the explosion, an overwhelming 98.1% still need support. The survey also determined that 26% of those polled had seen at least one family member test positive for COVID-19 since the blast.

The port explosion exacerbated Lebanon’s economic and political crisis, which began in 2019 and is showing no signs of abating. The local currency has lost more than 90% of its value and many are struggling to pay for necessities. The administration resigned en masse in the wake of the blast, but still remains in office as a caretaker government as politicians continue to fail to agree on a new cabinet.

France will hold an international conference on the Lebanese crisis on Wednesday, but the country and the United States as well want a new government to implement anti-corruption and governance reforms before promising more aid.

UNICEF has issued grave reports on the humanitarian situation in Lebanon before. Last month, UNICEF warned that Lebanon’s public water system was potentially only weeks away from collapsing. They added that more than a million people's water access has already been hindered.

Meanwhile, Human Rights Watch concluded in a new report that senior Lebanese officials knew about and “tacitly accepted the risk of deaths occurring” from the stockpile of improperly stored ammonium nitrate that sparked the explosion. The report says officials within Lebanon’s Ministry of Public Works and Transport were warned about the danger posed by the hazardous materials onboard the MV Rhosus, a Moldovan-flagged cargo ship that arrived at the port in November 2013. Lebanese officials vowed to investigate the blast, but Judge Tarek Bitar’s probe has stalled amid a lack of judicial independence, immunity granted to high-level political officials and myriad due process and fair trial violations, the report read.

“In the year since the explosion, procedural and systemic flaws in the domestic investigation have rendered it incapable of credibly delivering justice,” the report said.

Lebanon has also issued arrest requests to Interpol for the owner and captain of the ship that brought the fertilizer to the port. At least as recently as May, dangerous material was still being removed from the port.

Public anger over the lack of accountability is growing. Last week, the Lebanese news outlet MTV released a video depicting victims of the blast demanding justice from the grave. On Wednesday, many restaurants, cafes and other establishments will not open their doors in protest of the absence of justice.

“We are hoping to achieve justice in the near future and to hold accountable all those involved in this crime, which is not forgiven,” the Syndicate of Owners of Restaurants, Cafes, Night-clubs & Pastries in Lebanon said in a press release.