The Lebanese government is also seeking satellite images other countries have of the Beirut port explosion site. 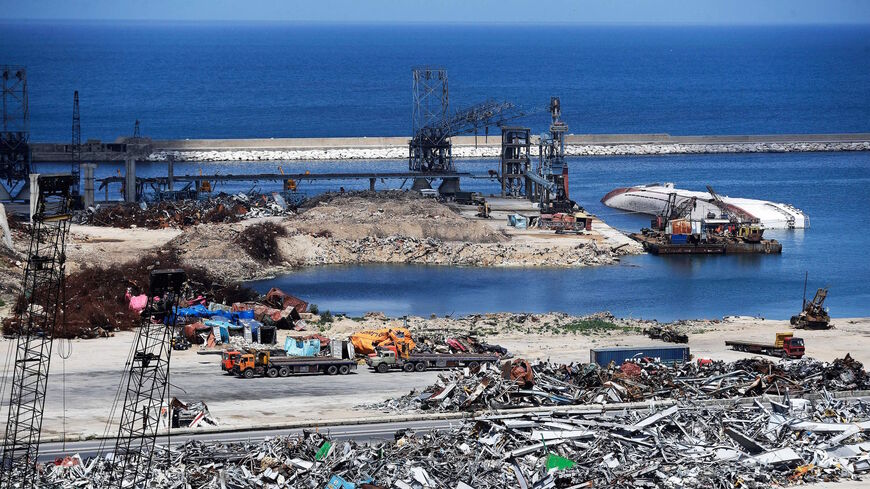 A picture shows heaps of metal scraps from the rubble of destroyed structures at the port of the Lebanese capital Beirut, on April 9, 2021, still reeling from the destruction due to a catastrophic blast in a harbor storage unit last August that killed more than 200 people and damaged swathes of the capital. - JOSEPH EID/AFP via Getty Images

A German ship has removed dangerous materials from Beirut’s port. The effort is part of the Lebanese government’s response to the deadly explosion in the port last year.

A ship from the Germany forklift manufacturer Combilift brought out 59 containers of “extremely dangerous material” from Beirut’s port and unspecified other locations, according to a tweet Wednesday from Lebanon’s prime minister’s office.

A massive explosion ripped through Beirut in August 2020 after 2,750 tons of the flammable fertilizer ammonium nitrate caught on fire and exploded. The material was being stored in a warehouse in the port. The blast killed more than 200 people and injured many more, in addition to destroying much of the city and displacing hundreds of thousands.

The explosion exacerbated Lebanon’s already harrowing economic crisis. Prime Minister Hassan Diab and his entire cabinet resigned in the explosion’s aftermath, but they remain in power as a caretaker government because politicians still have not formed a new government.

The removal of the material is the latest effort by the Lebanese state to prevent another disaster. The lead investigator of the explosion, the judge Tarek Bitar, issued 13 judicial orders to countries Tuesday demanding they submit satellite images they have of the blast scene. In January, the international police organization Interpol issued arrest warrants upon a request by Lebanon for the owner and captain of the ship that brought the ammonium nitrate to Beirut.

Lebanon signed a deal with Combilift in November to remove and treat containers of flammable materials. The material was treated in Beirut in February and departed for Germany Tuesday. It will arrive around late next week, according to The Associated Press.