The independent panel said it was concerned by reports that highly sophisticated surveillance tools are being used to monitor journalists, activists and political opponents. 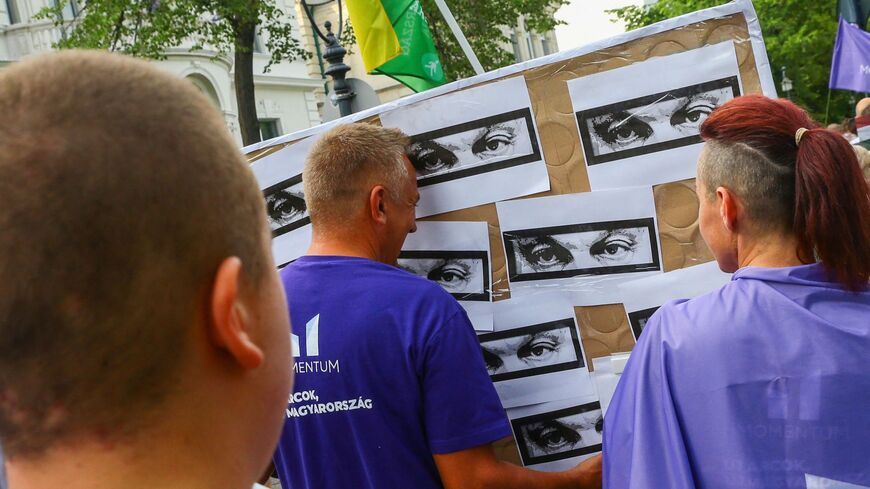 People take part in a protest against alleged governmental use of Israeli-made spyware to target hundreds of phone numbers, including those of journalists, in Budapest on July 26, 2021. - FERENC ISZA/AFP via Getty Images

A group of United Nations experts called on Thursday for a moratorium on the sale and transfer of surveillance technology worldwide until robust regulations are put in place to ensure human rights are respected.

Last month, a consortium of news outlets published an investigation that indicated Israeli firm NSO Group’s malware has been used by foreign governments to hack the phones of journalists, politicians and human rights activists. Using a leaked list of more than 50,000 cell phone numbers, journalists at 17 media outlets identified over 1,000 people across more than 50 countries who were selected as potential targets by NSO Group’s clients.

A forensic analysis of some of the phones on the list showed attempted or successful hacks with Pegasus, a surveillance tool developed by NSO Group that gives customers access to a phone’s contents and the ability to remotely access the camera and microphone.

“It is highly dangerous and irresponsible to allow the surveillance technology and trade sector to operate as a human rights-free zone,” the UN experts warned on Thursday.

“We are deeply concerned that highly sophisticated intrusive tools are being used to monitor, intimidate and silence human rights defenders, journalists and political opponents,” read the statement, which was signed by three UN special rapporteurs and five members of a UN working group on human rights and transnational corporations.

“We urge the international community to develop a robust regulatory framework to prevent, mitigate and redress the negative human rights impact of surveillance technology and pending that, to adopt a moratorium on its sale and transfer,” they said.

NSO Group, whose customers reportedly include the governments of Bahrain, Kazakhstan, Mexico, Morocco, Saudi Arabia and the United Arab Emirates, says Pegasus is used by clients to fight crime and terrorism. It dismissed the media investigation into Pegasus as “full of wrong assumptions and uncorroborated theories.”

The UN experts also called on Israel to disclose the measures it has taken to review export transactions with NSO Group. Last month, Israel appointed a commission to investigate the potential misuse of cyberweapons and review its own defense export policy in light of the spyware scandal.