Turkish army on lookout for tunnels in northern Idlib

Turkish forces have been leading security campaigns on the border with Syria, where they were able to destroy a number of tunnels used to smuggle people from Syria into Turkey. 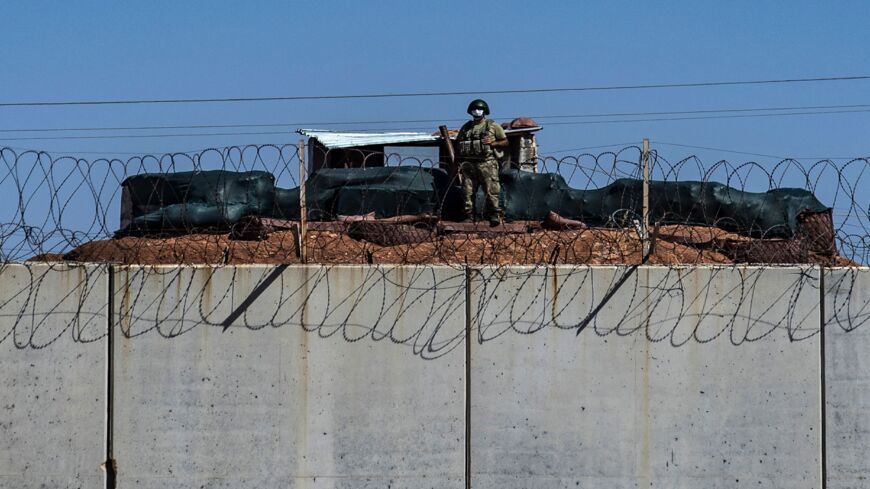 A Turkish soldier stands behind the border with Syria, during a joint Turkish and Russian patrol of military vehicles (unseen) in the countryside of the town of Derbassiye, on the border with Turkey, on July 14, 2021. - DELIL SOULEIMAN/AFP via Getty Images

Turkish forces have intensified their deployment on the border strip north of the Idlib governorate in northwest Syria in their search for tunnels used by smugglers to bring people illegally from Syria into Turkey.

According to a report by The New Arab website on Aug. 12, more than 30 Turkish armored vehicles were deployed near the town of Atma on the border strip with Turkey north of Idlib after Turkish forces received information about tunnels in the area used to smuggle people into Turkish territories. One of those tunnels was detected and blown up within a few hours.

Turkish forces have been closely monitoring the border strip for three months and were able to blow up eight tunnels in the Idlib countryside, most of them located near Khirbet al-Joz area in the west of the province.

According to a resident of the border city of Darkush who spoke to Al-Monitor on condition of anonymity, “The Turkish forces launched four security campaigns to blow up the tunnels used for human trafficking into Turkish territories.”

“On Feb. 18, two tunnels in Ain al-Bayda were blown up and another in Khirbet al-Joz. On March 4, one tunnel was blown up in Darkush. On June 16, 17 and 18, five tunnels were blown up between the areas of Tulul and Bayta in the countryside of Salqin. More recently, last week Turkish forces destroyed one tunnel in the town of Atma,” the source added.

“Smugglers dig tunnels for one use only, since it is immediately detected when the smuggling operation is over. [When the tunnel is destroyed], they start digging a new trench in another area,” the source continued.

“The cost of digging a tunnel could go up to $5,000, and some 100 people are smuggled through it. Smugglers get $1,000 per person crossing to the Turkish side. Hayat Tahrir al-Sham, [which controls Idlib], is well aware of the tunnels and their locations and is collaborating with the smugglers in return for $50 per person. This is not to mention that some HTS operatives work directly with smugglers to get a cut of the profits by allowing them to smuggle people and dig tunnels on the border with Turkey,” the source explained.

Ahmed Mazhar Saado, a freelance writer and journalist based in Turkey, told Al-Monitor, “The Turkish security forces and army must destroy the tunnels used by smugglers who are taking advantage of the Syrian citizens who are in desperate need to find refuge and security outside Syria where they are subjected to sporadic systematic military campaigns at the hands of the Syrian forces and its sectarian, Russian, Iranian and other militias.”

“Turkish security is targeted by the Kurdistan Workers Party and with it the Islamic State, which is a daily concern that haunts Turkey. This is why there has been military action to stop the flooding of the displaced inside Turkish territory. Security is the most important thing in establishing a civil state. Stopping illegal entry of people is the right of every surrounding regional state,” he added.

According to Saado, the international community is standing idly by while the Syrian government continues to crack down on the people of Idlib and its surrounding.

“This is what pushes Syrians to desperately search for a safe place where they can find refuge away from the daily bombardment that has killed more than a million Syrians since March 2011. The regional states and the sponsoring countries of the Geneva conferences must search for serious solutions to stop [Bashar] al-Assad’s declared war on the Syrian people. This is the only way to stop the forced displacement toward Turkey and Europe and for Syrians to live in peace and at bay from the regime’s killing machine that has been killing them for over 10 years now,” Saado said.

Syrians have been increasingly fleeing to Turkey due to the military campaigns launched by the Syrian government with Russian support last year. The Syrian government managed to take control over large swathes of territory in the countryside of Idlib, Hama and Aleppo. This is not to mention the last military escalation in Jabal al-Zawiya, south of the province.

Fadel Abdul Ghany, chairman of the Syrian Network for Human Rights, told Al-Monitor, “Asylum is a right for any Syrian citizen because of the ongoing war in Syria. And because many countries have closed their borders to Syrians, many of them resort to illegal means to flee Syria, mainly by being smuggled in a bid to escape persecution, oppression and murder, and other military campaigns launched by the regime and its allies.”

“Should the military campaign stop, we might witness a reverse migration, with many returning home. But smugglers take advantage of those who wish to leave to make money. Countries have no right to close their borders to those wishing to seek refuge, and that is in accordance with international law,” he added.

Wael Olwan, researcher at the Istanbul-based Jusoor Center for Studies, told Al-Monitor, “The military campaigns are one of the main reasons that drives people to flee toward the borders for fear that the Syrian regime would advance to those areas. But because of the poor living conditions on the border strip, they seek to enter Turkey.”

“However, the displacement movement during the recent period was relatively low compared to previous years. But there are concerns that these new tunnels are not only used to smuggle people but also to smuggle IS and their families, as well as weapons, drugs and antiquities,” he added.