Lebanon is experiencing severe fuel, medicine and water shortages and politicians are still unable to form a new government. 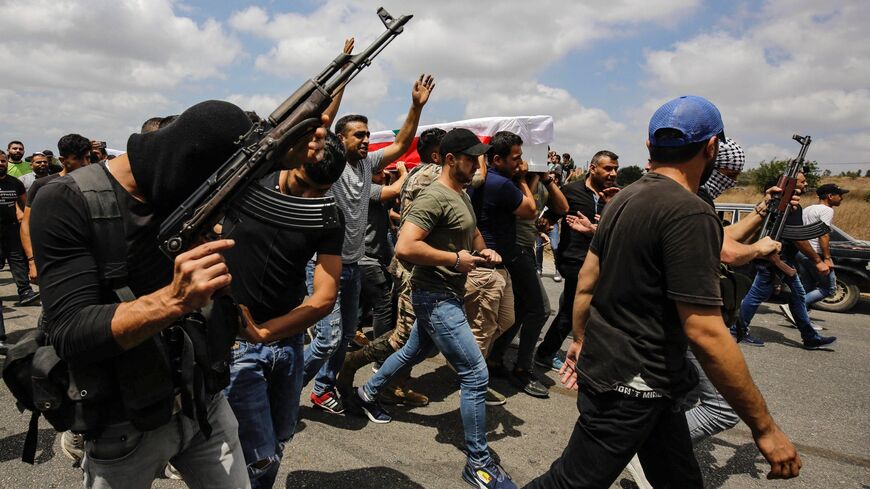 Armed men shoot in the air on Aug. 18, 2021, during the funeral of four members of the Shteiteh family in the village of al-Daouseh in Lebanon's Akkar region; the four were among 28 killed in the Aug. 15 fuel tank explosion in the nearby village of al-Tleil. The blast scorched a crowd clamoring for gasoline the army had been distributing in light of severe fuel shortages that have paralyzed a country also beset by medicine, gas and bread shortages. - IBRAHIM CHALHOUB/AFP via Getty Images

Protesters blocked several roads and a rocket was fired at a gas station Wednesday as public anger continues to rise in Lebanon over the debilitating economic crisis.

Local residents cut off a road in the coastal city of Sidon in protest against worsening fuel shortages. Protesters in nearby Zahrani also blocked a street to a gas station that refused to sell fuel. Demonstrators also forced road closures in Tripoli and Beddawi in the north, the official National News Agency reported.

On Monday, unknown perpetrators fired a rocket and gunshots at a gas station in a Beirut suburb.

Lebanon’s economic and political crisis is worsening. Customers spend hours at gas stations to perhaps only partially fill up their vehicles' tanks due to a fuel shortage, which is the source of much public anger. The Lebanese pound has lost more than 90% of its value since 2019. Capital controls mean many Lebanese cannot withdraw their savings from banks. Electricity is only on for a few hours a day, and there are also bread, medicine and public water shortages.

The fuel crisis is particularly harrowing. The Lebanese army raided gas stations Saturday and seized fuel in an attempt to stop suppliers from hoarding. Earlier, the central bank halted state subsidies on fuel imports to relieve pressure on banks’ currency reserves, which are diminishing. On Sunday, a fuel tank exploded as people were desperately seeking to obtain gasoline in the northern region of Akkar, killing 28. Some of the victims were buried Wednesday, their coffins draped in Lebanese flags for the funeral procession, according to local media. At least two were soldiers; the army had seized the tank, believed to have been used to hoard or smuggle fuel, and had distributed gasoline to people who brought containers to fill up.

The crisis is being compounded by politicians' inability to form a government and implement reforms. Prime minister-designate Najib Mikati has been unable to form a Cabinet so far. Lebanon has had a caretaker government since the mass resignations following the Beirut port explosion last year.