At least 28 people who were trying to obtain fuel died when a tank exploded in northern Lebanon, prompting angry locals to burn the house of the site owner. 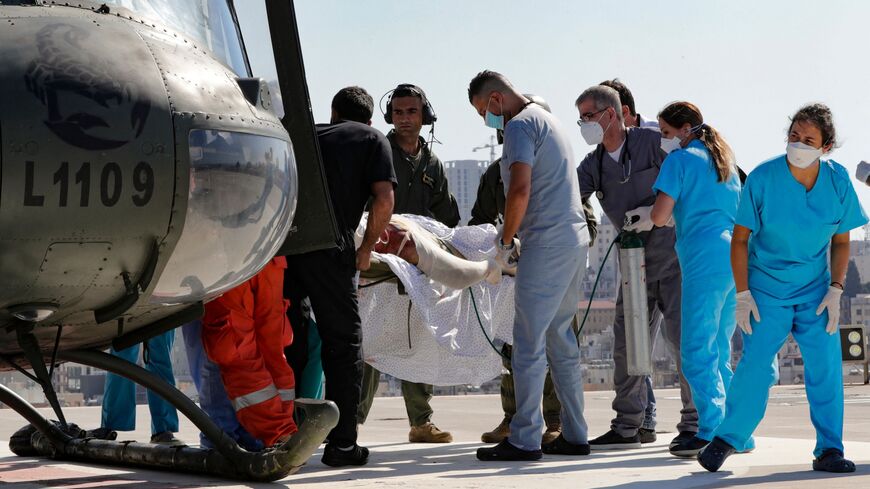 A man with severe burn injuries suffered in an overnight fuel tank explosion in Lebanon's northern region of Akkar that killed 28 people and left many more wounded is carried on a stretcher from a helicopter after being transported for treatment at the specialized unit of the Geitaoui Hospital in the capital, Beirut, on Aug. 15, 2021. - ANWAR AMRO/AFP via Getty Images

Egypt delivered medical aid to Lebanon on Monday in response to Sunday’s fuel tank explosion in the Akkar region that left at least 28 people dead.

Lebanon has been undergoing a major fuel shortage, and people were attempting to obtain fuel from the tank when it exploded. The explosion prompted significant outrage in the country, and some locals burned the house of the site’s owner, the local news outlet Naharnet reported. Egypt also called for a new Lebanese government to be formed following the deadly explosion, the state-owned Al-Ahram reported.

Sources told media outlets that the military had taken control of a fuel tank thought to have been used for smuggling in the northern part of the country and had distributed fuel to local residents before the explosion took place early Sunday.

The Kuwaiti Red Crescent Society also said Monday that it would be helping burn victims. Some burn patients also were reported to have been airlifted to Turkey.

Lebanon’s harrowing economic and political crisis continues to worsen. People spend hours at gas stations to only partially fill their vehicles' tanks. There are severe medicine shortages, and public electricity is only on for a few hours a day — if at all. The crisis began in 2019, and the local currency has since lost more than 90% of its value against the US dollar. Capital controls imposed by banks mean many Lebanese cannot access their savings.

The Beirut port explosion in August 2020 worsened the situation, and many Lebanese and Syrian victims of the blast are still struggling to make ends meet a year later. The public water supply has also been greatly diminished, according to the United Nations.

The country is also politically paralyzed and has been without a governmental Cabinet since the 2020 Beirut explosion. President Michael Aoun hosted Prime Minister-designate Najib Mikati on Monday to work on the government formation. France and the United States in particular want a new Cabinet to implement governance and anti-corruption reforms before promising more assistance. Mikati and Aoun’s discussions have reached the point of reviewing candidates for specific positions, Naharnet said.