The Palestinians’ optimism about the future has sharply decreased along with the popularity of the Palestinian Authority and its government. 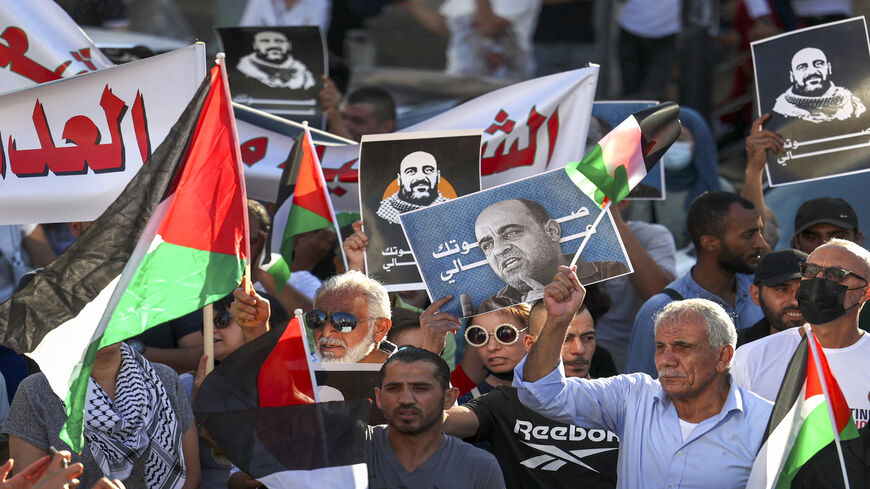 Palestinian protesters rally denouncing the Palestinian Authority (PA) in the aftermath of the death of activist Nizar Banat while in the custody of PA security forces, Ramallah, West Bank, July 17, 2021. - Abbas Momani/AFP via Getty Images

RAMALLAH, West Bank — The popularity of the Palestinian Authority (PA) and its government is indisputably and incessantly declining among Palestinians.

This decline started when President Mahmoud Abbas postponed April 30 the general elections —  presidential, legislative and Palestinian National Council elections for the PLO — followed by the security services’ killing June 24 of the political opponent Nizar Banat in Hebron in the southern West Bank.

Protest activities over the killing of Banat were cruelly attacked and protesters arrested, as part of a campaign that is still ongoing.

The PA is not to be envied for the pickle it is in, for its dwindling popularity and for the stifling financial crisis it is experiencing as a result of a significant decline in international support.

Add to this Israel’s deduction of clearing funds amid the absence of any political process with Israel that would lead to an end to the occupation.

Moreover, the PA is exposed to sharp international criticism, be it from political parties such as the European Union and the United States, or legal and human rights organizations, against the backdrop of the repression practiced by the authorities against protesters and activists and the suppression of freedoms.

These conditions that the PA is facing have affected the Palestinians. The latest opinion poll published by the Arab World for Research and Development (AWRAD) on Aug. 25 showed that 65% of the Palestinians believe that Palestine is going in the wrong direction. It also showed that optimism for the future has decreased from 65% to 48%, and the percentage of those who believe that the establishment of a Palestinian state is more elusive increased from 44% to 58%.

Meanwhile, 67% of the respondents supported revoking the Oslo Accord, and 61% opposed security coordination between the PA and Israel.

According to the poll, 69% frown upon the PA’s handling of the killing of Banat and the ensuing events, while 60% said that the investigation committee that was formed by the Palestinian government is not impartial.

Also, the poll showed that the negative evaluation of the government’s performance increased from 37% before the killing of Banat to 55% after he was killed.

The Palestinians expressed their desire to make a change in their political and economic reality, as 70% of the respondents supported forming a new government, 75% supported the immediate holding of legislative and presidential elections and 81% said they intended to vote.

In the event of bilateral presidential elections, Barghouti, who led a list to contest the legislative elections that were called off, along with Nasser al-Kidwa, who was dismissed from the movement, would beat the head of the Hamas political bureau Ismail Haniyeh by 68% compared to 32%.

AWRAD Director Nader Saeed told Al-Monitor, “The opinion polls conducted over the last 30 years in Palestine showed that the higher level of frustration and despair among Palestinians did not result from confronting Israel or the difficult economic conditions, but rather from internal differences and confrontations.”

He said, “Every internal confrontation affects the dignity of Palestinians, breaks their morale and instills despair and pessimism into their hearts both in the West Bank and Gaza. This has happened twice, the first time during the division in 2007 and the second time after the killing of Banat and the subsequent events and repression.”

Saeed added, “The internal parties failed to manage the situation because of their intransigence, and they failed to lead society to a higher level of dialogue and joint action at a time when the leadership was supposed to accommodate others and find ways to contain differences and not stand behind personal interests.”

Regarding the decline in the popularity of the PA and its government, Saeed said that the conditions the PA is going through required wisdom and dialogue with the internal parties, but this was not available.

“Despite the fact that the Fatah movement and the PA felt a massive attack from all local and external parties — and that there is a conspiracy against them — this urgently required them to solve internal problems with the greatest degree of wisdom, simplicity and cleverness,” he explained.

Saeed noted, “The Fatah movement’s feeling that it could lose the elections was based on incorrect estimates that pushed them toward security and dictatorial practices and prompted them to confront dozens of demonstrators — not thousands — instead of absorbing them and granting them the right to demonstrate daily.”

There does not seem to be any light at the end of the tunnel of major internal crises. The general elections are still on hold amid no hope to hold them.

Also, the repression of freedoms and arrest campaign are both still going strong, as is the file of Banat, which infers that the main factors behind the frustration of Palestinians are still present.

In the absence of any signs that general elections would be held, the PA is seeking to hold in the coming weeks local council elections in villages, towns and cities in an attempt to stir up internal matters.

During its Aug. 24 meeting, the Fatah Central Committee demanded to expedite the organization of the elections of local bodies and to complete the procedures and preparations for their success with the concerned authorities. Its member Azzam al-Ahmad said in statements to Palestine TV that the elections would take place between Dec. 10 and Dec. 20, before the start of the Christmas holidays.

The weight of the municipal elections for Fatah seems lighter than that of the presidential and legislative elections, especially given its ability to contest them through lists shared with PLO factions, independent individuals or members of influential families, or by acclamation given the absence of any competing lists in some regions. Unlike the legislative and presidential elections, these elections are apolitical.

The last local elections were held on May 13, 2017, followed by by-elections in July in the West Bank, but not in the Gaza Strip, which has been controlled by Hamas since mid-2007.