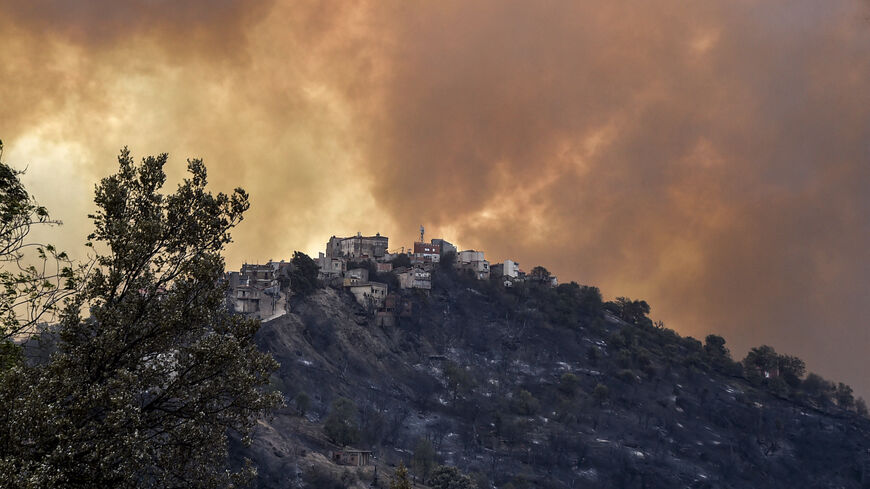 Smoke rises from a wildfire in the forested hills of the Kabylie region, east of the capital Algiers, on Aug. 10, 2021. - RYAD KRAMDI/AFP via Getty Images

Raging wildfires in Algeria have left at least seven people dead and several seriously injured, according to the Algerian interior minister, who blamed arson for the blazes that broke out Monday.

Interior Minister Kamel Beldjoud said on Tuesday that six people were killed in Tizi Ouzou and one in Setif. Beldjoud gave instructions for hotels, youth hostels and other available facilities to accommodate residents displaced by the fires.

"The current priority is to protect the local populations and preserve lives," Beldjoud said, according to the Algeria Press Service.

"Fifty fires starting at the same time is impossible. These fires are of criminal origin," he said, adding there will be an investigation. Three people suspected of arson were detained south of Algiers in Medea, according to Algerian public radio.

Twenty-five forest fires have been recorded since Monday across the Kabylia region in northern Algeria, reported local news outlet Observ'Algéri. On Saturday, a team of 130 to 140 evaluators will visit the affected areas to assess the losses.

Algerian President Abdelmadjid Tebboune sent a ministerial delegation to Tizi Ouzou to offer condolences to the victims’ families and survey the damage, according to al-Bilad newspaper.

The North African country is the latest in the region to be ravaged by wildfires. Nearly 600 fires are currently raging across “all corners” of Greece in what Greek Prime Minister Kyriakos Mitsotakis described Tuesday as a “natural disaster of unprecedented proportions.”

In Turkey, at least nine people are dead from wildfires still burning in Antalya, Adana, Isparta, Mersin, Mugla and Osmaniye, the Turkish Red Crescent said Tuesday. Turkish President Recip Tayyip Erdogan has described the fires as the worst in the country’s history.

A landmark report from the United Nations released Monday said it is “unequivocal” that human influence has warmed the planet, creating the potential for "extreme events unprecedented in the observational record.”