At least 25 soldiers died trying to extinguish the fires in Algeria’s Kabylia region. 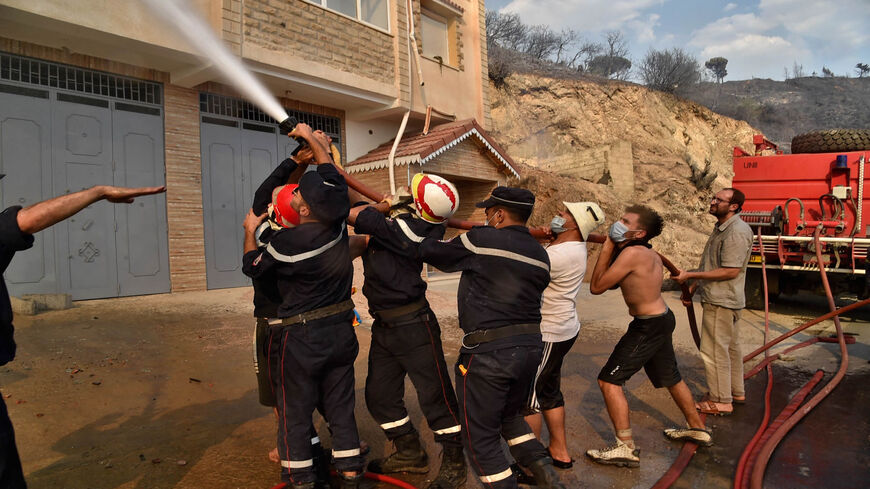 Firefighters battle the flames of a building on fire, in the forested hills of the Kabylia region, east of the capital Algiers, Algeria, Aug. 11, 2021. - Ryad Kramdi/AFP via Getty Images

The death toll from the wildfires raging across Algeria has risen to 65, the government said on Wednesday, as blazes fueled by high temperatures and strong winds burned across the North African country for the third day.

The casualties include 25 soldiers who were working to contain the fires. Many other soldiers have serious burns, the Defense Ministry said, including 12 who are hospitalized in critical condition.

President Abdelmadjid Tebboune announced a three-day national mourning period. On Tuesday night, he tweeted his condolences, adding that the fallen soldiers had successfully rescued more than 100 citizens from the mountains of Bejaia and Tizi Ouzou in Algeria’s Kabylia region.

“We bow in reverence before the souls of the righteous sons of the nation,” Tebboune wrote on Twitter.

Most of the deaths occurred in the city of Tizi Ouzou, where the military and civil defense teams have been working round-the-clock since Monday to put out the flames and evacuate residents. Algeria’s National Meteorology Office said temperatures there are expected to reach 116 degrees Fahrenheit this week.

Algeria has recorded more than 100 fires in recent days, a majority of them still not under control, state news agency APS reports.

Prime Minister Ayman Benabderrahmane said Tuesday that the Algerian government was in "advanced talks with (foreign) partners to hire planes and help speed up the process of extinguishing fires.”

Algerian officials have suggested arson is to blame for the wildfires, but have not offered any evidence. Benabderrahmane told state television that the blazes appeared to be “highly synchronized,” which “leads one to believe these were criminal acts.”

"Fifty fires starting at the same time is impossible,” Interior Minister Kamel Beldjoud said on Tuesday, adding that the government will launch an investigation and compensate the victims.

Algeria is the latest country to suffer from wildfires this summer, following blazes in Lebanon, Greece, Turkey, Canada and the United States. A United Nations climate report on Monday warned that human activity has increased the potential for more extreme weather events.