Iran's Raisi calls US 'defeat' in Afghanistan opportunity for peace 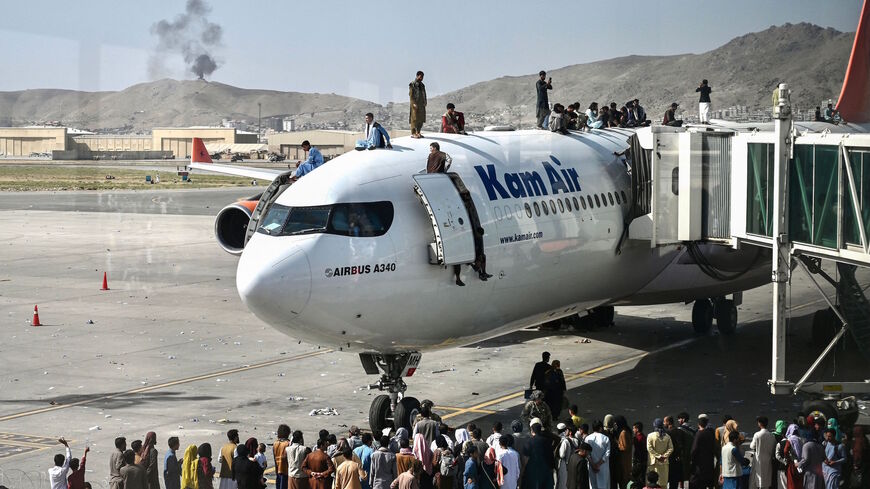 Afghan people climb onto a plane as they wait at the Kabul airport in Kabul on Aug. 16, 2021, after a stunningly swift end to Afghanistan's 20-year war. - WAKIL KOHSAR/AFP via Getty Images

Iranian President Ebrahim Raisi said on Monday that the United States’ “defeat” in Afghanistan could make way for peace as the war-torn country reels from the Taliban’s lightning advance.

"The military defeat and the US withdrawal from Afghanistan should offer an opportunity to restore life, security and lasting peace in that country," Raisi’s office quoted him as telling outgoing Foreign Minister Mohammad Javad Zarif in a call Monday.

Scenes of chaos unfolded at Afghanistan's international airport on Monday, a day after the US-backed government collapsed and the Taliban declared victory. As Afghan President Ashraf Ghani fled the capital city for an unspecified destination, thousands of desperate Afghan civilians flocked to the airport hoping to board evacuation flights out of the country.

“The Islamic Republic of Iran believes that the rule of the will of the oppressed people of Afghanistan has always been a source of security and stability,” Raisi told Zarif. "Iran is committed to its neighborly relations with Afghanistan by closely monitoring developments in the country,” the ultraconservative cleric said.

Iran shares a border with Afghanistan and according to the United Nations’ refugee agency, hosts some 3 million Afghans who fled their country’s war. Following the surge of recent violence, Iranian government has offered Afghan civilians temporary shelter in three provinces along its eastern border.

After Kabul fell to the Taliban on Sunday, Zarif tweeted, “Iran stands ready to continue its peacemaking efforts.” The Iranian diplomat discussed the insurgents’ sweeping offensive with China's special envoy to Afghanistan Yue Xiaoyong, who arrived in Tehran on Monday.