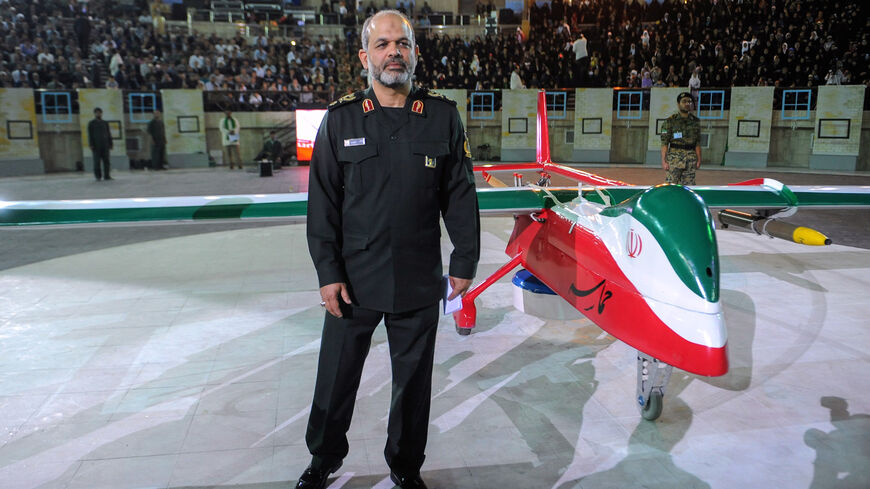 Iranian Defense Minister Ahmad Vahidi stands next to an Iranian-made drone during a ceremony in Tehran on May 9, 2013. - HEMMAT KHAHI/AFP via Getty Images

Vahidi, a former minister of defense, said, “Our country is managed at the ministerial level and some feel that it should be managed more at the provincial level, to maximize the potential of the provinces and have the ministries monitor and support.” He added that he favors the idea.

Vahidi continued, “Today the discretion of governors is limited and they need more power.” He stressed that these powers need to be clearly defined and appropriate budgets allocated.

Under Iran’s current system, the interior minister appoints individual governors for the country’s 31 provinces. Vahidi is not proposing a change to this system, but is recommending that governors gain more power to make decisions without having to wait on approval from Tehran.

Provincial discretion is particularly important for border provinces and others farther away from the central capital Tehran. Residents of border provinces often complain of poor management, neglect and a general misunderstanding of issues at the hands of appointed governors.

Governors are sometimes appointed from outside the provinces and less for their expertise than their relationship with the central government, leading to a lack of understanding of local issues. Poor management leads to a variety of issues that can threaten security in Iran. The recent protests in Khuzestan were sparked by poor water management, leaving many residents feeling they had no choice but to take to the streets to voice their demands before the issue was temporarily resolved. A governor from the area, in theory, could have had a better understanding of the issue before it erupted into protests.

Mohammad Islami was appointed as the new head of Iran’s Atomic Energy Organization, replacing Ali Akbar Salehi, who was directly involved in the original negotiations that led to the signing of the nuclear deal known as the Joint Comprehensive Plan of Action. Unlike Salehi, who holds a nuclear engineering degree from MIT, Islami does not have a relevant technical background.

With the departure of Foreign Minister Mohammad Javad Zarif, the nuclear file will no longer officially be managed by the Foreign Ministry, though unofficially the file was put under the supervision of the Supreme National Security Council long ago, and it's very likely that the supreme leader’s office has been ​calling the shots.

When asked which institution would officially take over the nuclear negotiations, Foreign Ministry spokesperson Saeed Khatibzadeh said that the current talks are not negotiations for a new agreement but negotiations to bring the United States back into the deal. He added that if the United States returns to the deal under the original terms, Iran would also return to full compliance. He also said that it will soon be announced which organization has taken over the nuclear negotiations and that the matter would be managed by “national consensus” rather than just one organization.