Apart from his notoriety as the "butcher of the free media," Saeed Mortazavi has been implicated in multiple controversial cases, from torture and murder to corruption and embezzlement. 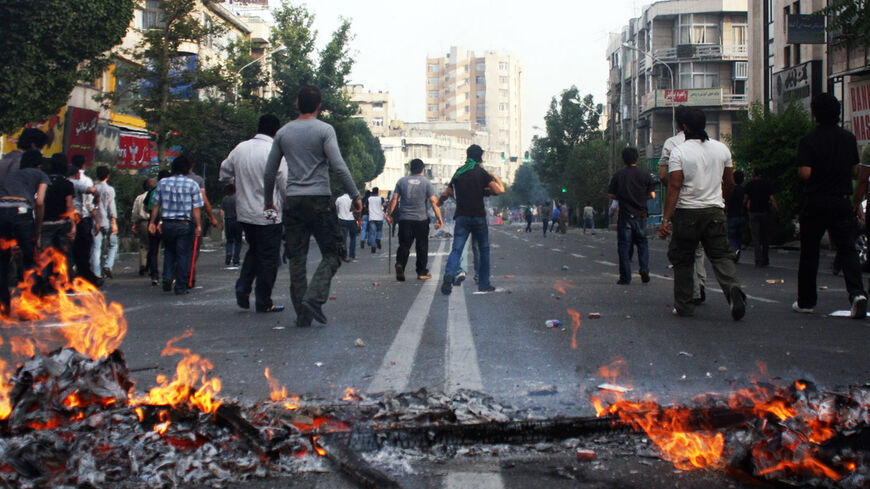 Supporters of Iran's defeated presidential candidate Mir Hossein Mousavi clash with police (unseen) during a protest in Tehran on June 20, 2009. Saeed Mortazavi had been linked to the deaths of at least four protesters arrested during rallies against the disputed re-election of then hard-line President Mahmoud Ahmadinejad. - NARGES TANKBRIS/AFP via Getty Images

Iran's Supreme Court issued a ruling in full support of former prosecutor Saeed Mortazavi, overturning an earlier two-year jail sentence, which had found him guilty in connection with the death of a political detainee. His lawyer confirmed the acquittal on Tuesday.

In 2017, the hard-line ex-prosecutor was convicted of "accessory to murder", following a protracted trial in Tehran which ultimately led to his imprisonment. Mortazavi's sentence, which Iran's judiciary reluctantly issued under mounting public pressure, came to a premature end after 17 months, as prison authorities found him to be in "good conduct." Even the incomplete sentence was eased with reported furloughs, rarely granted to other prisoners.

After his release in 2019, the ex-prosecutor began a fresh legal battle to "restore dignity," invoking an article in Iran's penal law which — in extremely rare situations — requires the judiciary chief to personally intervene and review a certain case.

Expressing relief at the new ruling, Mortazavi's lawyer said it proved the "innocence" of "a prosecutor, whose main concern was merely public security" but had been "put behind bars instead of being glorified."

The case originally linked Mortazavi to the deaths of at least four protesters arrested during rallies in 2009 against the disputed re-election of then hard-line President Mahmoud Ahmadinejad. As Tehran's prosecutor at the time and a close associate of the president, Mortazavi ordered the transfer of scores of arrested protesters to the notorious Kahrizak Facility, south of the capital Tehran. In nearly no time, horrifying reports of mistreatment, abuse, torture and even rape began to trickle in. Upon their deaths, the four prisoners had been checked by the prison's on-duty medical doctor, who later mysteriously died. Iranian authorities scrambled to offer varying narratives, from "heart failure" to "suicide," to explain the doctor's death.

While he originally denied any wrongdoing, Mortazavi apologized seven years later over the "horrific" but "unpremeditated incidents." The growing outrage triggered the facility's closure and Mortazavi's dismissal. Still, he clawed his way back to power after being appointed by Ahmadinejad as the head of Iran's wealthy Social Security Organization, where his tenure was marred with fresh corruption allegations.

Mortazavi's notoriety dates further back to the turn of 2000, when as a 33-year-old judge, he imposed a reign of terror marked by a mass closure of Reformist newspapers and a widespread crackdown on journalists, effectively putting an early end to what had come to be known as "the spring of the press" in Iran. In the face of the growing criticism against his nightmarish rule, Mortazavi won unwavering support from Supreme Leader, Ayatollah Ali Khamenei, who famously praised the "brave" and "motivated" judge that "should serve as a role model."

And to the Western world, Mortazavi is perhaps known more for his connection with the death in 2003 of Canadian-Iranian photojournalist Zahra Kazemi. Apart from a pile of evidence pointing to his involvement, a parliamentary fact-finding committee at the time also concluded that the prosecutor was directly responsible for Kazemi's death. Still, he never faced charges over the female journalist's death.