In a letter to President Joe Biden, a group of Muslim, Christian and Jewish leaders called for the administration to adopt “a resolute, diplomacy-first" policy on Syria. 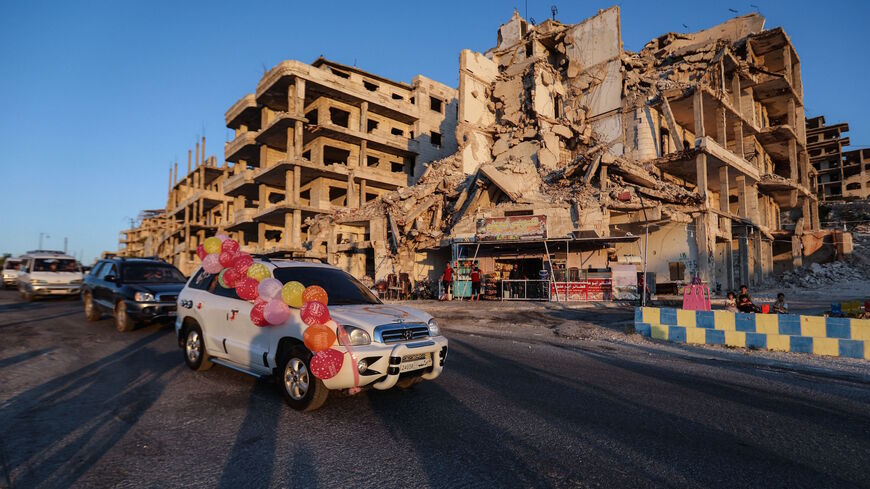 A wedding convoy drives past Abu Ali's cafe, set up on the ground floor of a building heavily damaged during the civil war, in the Syrian town of Ariha in the rebel-held northwestern Syrian Idlib province, on July 11, 2021. - AAREF WATAD/AFP via Getty Images

A coalition of civic and faith-based leaders is urging President Joe Biden to put Syria’s decadelong civil war at the top of his foreign policy agenda and appoint a personal envoy to push for peace.

“We are writing to you not only as the President of the United States of America but as a person of faith striving for justice at home and abroad,” read a letter obtained by Al-Monitor sent this month to Biden and Secretary of State Antony Blinken.

The letter, which was signed by nearly 60 Jewish, Christian and Muslim leaders in the United States, calls on the administration to adopt “a resolute, diplomacy-first” policy for Syria.

“In our churches, synagogues, mosques, and temples, we have prayed for the people in Aleppo, Ghouta, Idlib, and Homs,” they said. “But, so far, our sympathy did not translate into sustained political resolve to end the crisis.”

"It is with much thought, prayer, and deliberation and with a deep sense of urgency that we are calling for these actions by our government," read the letter.

Why it matters: Biden is the third American president to face the war in Syria, where a decade of fighting between forces loyal to Syrian President Bashar al-Assad and the opposition seeking to oust him have killed hundreds of thousands of Syrians and displaced more than half the population.

Unlike his predecessors, Biden hasn’t named a special envoy to Syria, a decision his critics say is evidence the Middle East country ranks low on his list of priorities. The letter, which was also signed by former US Ambassador to Syria Robert Ford, called on the administration to replace acting envoy Aimee Cutrona with a high-profile diplomat who can serve as Biden’s full-time point person on the crisis.

“We want them to draw up a plan for the future,” said Ayman Abdel Nour, president of the nonprofit Syrian Christians for Peace. The White House has not yet concluded its internal policy review of Syria, disappointing Nour and other advocates who say they were promised more information back in May.

A State Department official told Al-Monitor that as it conducts a top-to-bottom Syria strategy review, the administration’s focus “remains on the immediate needs, which include the provision of humanitarian assistance for the Syrian people, the importance of a nation-wide ceasefire, and ensuring we defeat ISIS. ” The United States is also committed to supporting the political process envisioned in UN Security Council Resolution 2254, the official said.

What’s next: Syria’s conflict-fueled economic downturn has left 13.4 million people — two in every three Syrians — in need of humanitarian assistance, the UN estimates. To offset the suffering, the United States pledged nearly $600 million in aid in March.

Zaher Sahloul, president of the disaster relief agency MedGlobal, said the Biden administration’s focus on humanitarian aid to Syria is appreciated, but far more can be done on the diplomatic front to stem the bloodshed.

As the administration formulates its Syria policy, the violence is growing deadlier in Daraa. Civilians in the southwestern city are suffering from shortages of fuel, water, fuel and medicine under what the UN describes as “near siege-like” restrictions imposed by the regime.

“Every few months, there will be a crisis,” said Sahloul. “Now it’s Daraa, where you have the threat of another displacement and massacres. Before it was Idlib. Next time it will be somewhere else.”

The conflict continues to drive Syrians from their homes in what remains the world’s largest refugee crisis. The letter calls on Biden to step up resettlement from Syria, from which an estimated 6.6 million people have fled since 2011. Between February and July, the United States admitted 414 refugees from Syria, according to State Department data.