Feud between Iraqi Sunni leaders could undercut bloc ahead of elections

Speaker of parliament and leader of the Advancement alliance Mohammed al-Halbusi has accused the leader of al-Azm alliance, Khamis al-Khanjar, of selling Sunni land. 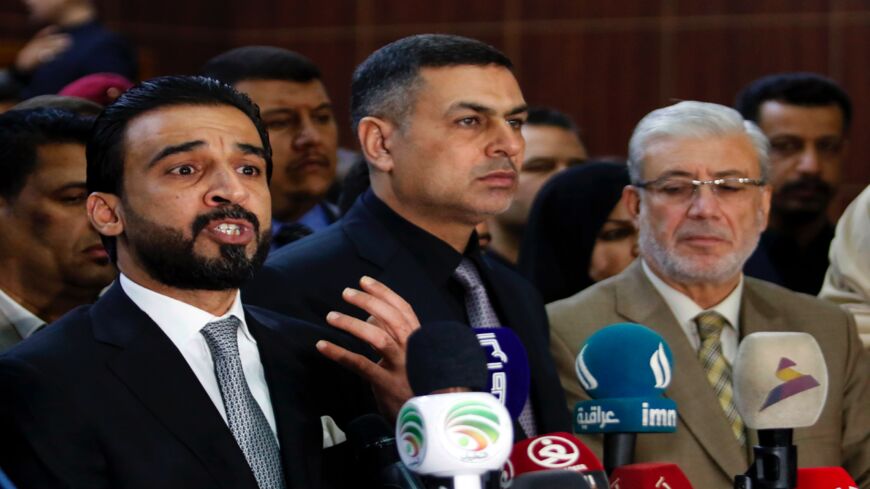 As Iraq's legislative elections draw near, a major conflict between Sunni political leaders has started to rear its head for several political, societal and economic — but also regional — reasons.

This has led Sunni politicians to warn of the impact of the conflict between the leader of the Advancement alliance, Mohammed al-Halbusi, and the leader of al-Azm alliance, Khamis al-Khanjar, as they deem this a reason Sunnis could lose a number of seats in the next parliament.

Sunni parliament member Raad al-Dahlaki said on Aug. 2, “The fierce competition between the two alliances’ candidates will result in the loss of Sunni seats, especially in the mixed electoral governorates of Baghdad and Diyala, among others.”

Sunni politicians said in press statements, “What is currently taking place on the Sunni street is an electoral competition that has nothing to do with the regional role, and we expect more battles to emerge with the aim of settling other scores.”

The real conflict began when Halbusi sent on July 23 a text message to Khanjar, accusing him of selling the land of some Sunni areas.

“We shall not allow you to give up on the lands, and I have repeatedly tried to keep the national interest and the Sunni cause away from useless differences," the text stated.

A few minutes later, Khanjar replied in a statement: “I cannot reciprocate and use the same words that I do not know how and where you learned them from, but I promise you that I will remain a defender of the rights of my family, the rights that you wasted for fear of losing your position.”

The text and the statement were leaked to political and media WhatsApp groups and fact-checked by Al-Monitor. Halbusi’s text message was insulting toward Khanjar, especially when he described him as “a waiter in a restaurant.”

Rahman al-Jubouri, a former senior researcher at the National Endowment for Democracy in Washington, told Al-Monitor “some of the goals of the Sunni-Sunni conflict are economic, while others are related to the Sunni leadership and yet others to regional axes.”

He added, “The Sunni leadership brings great economic benefit to those who lead it. Therefore, the conflict between Halbusi and Khanjar has erupted because they are the main poles of Sunni politics.”

This is the first time the conflict between Sunni parties has reached this stage, which some consider a healthy condition that has produced two Sunni political approaches — one of which will receive two-thirds of the votes while the other will receive one-third.

Halbusi, who is the youngest speaker of parliament in Iraq's history, is working to limit Khanjar’s role as the most prominent Sunni competitor. At the same time, he is strongly refraining from angering Khanjar’s Shiite allies, all of whom are close to or are accused of being loyal to Iran.

Khanjar and Halbusi are running several pages on social media defending themselves, having courted Sunni activists and journalists to defend them and advocate against the other.

“Funded” accounts on Facebook demonizing both sides have recently emerged, which suggests the two could be engaged in an electronic war.

A Sunni activist told Al-Monitor on condition of anonymity that “there are funds that are being paid to Sunni activists and bloggers to join a team of opponents, as well as to managers of WhatsApp groups that witness great discussions and clashes.”

“You rarely find a Sunni activist who does not care about the Halbusi-Khanjar conflict, but some of them adopt frank views and publish videos and misleading information aimed at bringing down the opponent,” he added.

A few weeks ago, Khanjar promised to return the families of the Jurf al-Sakhr district in the northern Babil governorate to their homes after more than seven years of displacement because of the Islamic State’s control of their area, which came under the control of armed Shiite factions after the liberation operations.

Khanjar said his promise would materialize on the first day of Eid al-Adha. It did not. Armed Shiite factions tried to stand with him, as they worked to bring together a few tribal sheikhs in the Jurf al-Sakhr district and spoke in front of the Iranian-backed media about their return to the area, which is said to be devoid of its inhabitants to date.

After Khanjar made the promise, Halbusi called it electoral propaganda, "not a humanitarian and moral issue.”

Sunnis are now divided between supporters of the Advancement alliance led by Halbusi and al-Azm alliance led by Khanjar. However, some go in the direction of saying that “what is happening is healthy as it offers voters two options only, as is the case in the US elections.”

Halbusi — who did not defend his most prominent Sunni rival, businessman Jamal Karbouli, when he was arrested on April 18 on charges of “corruption” despite being a party leader represented in parliament — is now seeking to get rid of Khanjar, being the last obstacle in the Sunni arena.

Nonetheless, Halbusi and Khanjar are likely to meet immediately after the elections to forge political alliances and perhaps form a large Sunni front within the Iraqi parliament.