Climate change and flood forecasts pave the way for Egypt's foreign policy on the continent. 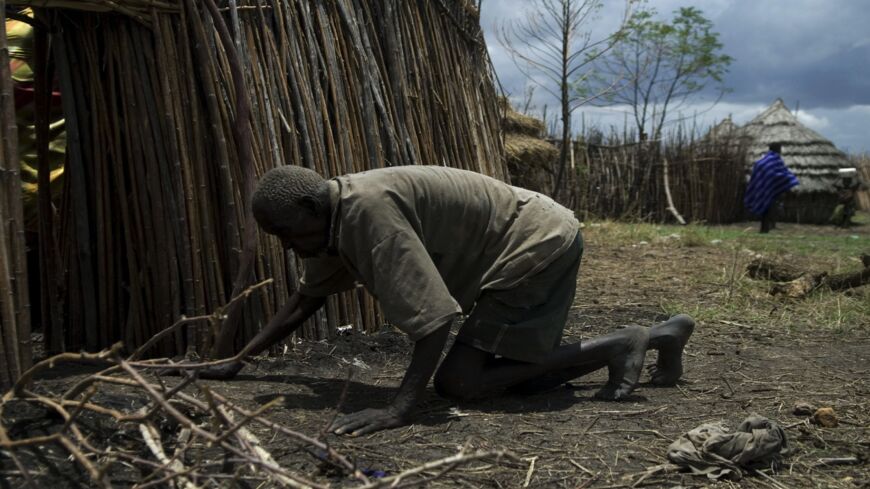 Lochaun John, who suffers from severe undernourishment, crawls into his hut in Lokupoi village, Moroto, Uganda, on March 28, 2008. He is in a part of Uganda that climate change is plunging into famine and is unable to make a living because he lives in Karamoja, one of the driest and least developed areas in Uganda. Africans are expected to face a severe lack of food and drinkable water by the end of the century. - WALTER ASTRADA/AFP via Getty Images

Egypt has been investing in a new sector to boost its presence in Africa and the Nile Basin through managing climate change and providing flood and heavy rain forecasts, which are issues many African countries face.

On July 16, Egyptian Minister of Water Resources and Irrigation Mohamed Abdel Ati inaugurated the Rain and Climate Changes Forecast Center in Kinshasa in the Democratic Republic of the Congo (DRC). The center was funded by an Egyptian grant exceeding $10 million.

Abdel Ati stated during the inauguration ceremony, “The DRC's Rain and Climate Changes Forecast Center is very important for the study of climate change. The center's work will help protect citizens from sudden climatic disasters.”

“The center will capitalize on new information and data collection technology, as it has been equipped with the latest rain forecasting systems. This will enable it to study the effects of climate change on the DRC and to set measures to protect citizens from the sudden risks of climate change," he said.

Deputy Prime Minister and Minister of Environment and Sustainable Development of the DRC Eve Masudi said during the inauguration, “Equipping the forecasting center is the product of joint cooperation between Egypt and the DRC. It is an important tool to support the Congolese government in its functions and the rational management of water resources. The center will contribute to forecasting rain and natural disasters. It will also help us recognize the signs of climate change and play a vital role in directing the agricultural sector through a better understanding of the seasons and managing river water.”

Not only did Egypt deploy a center for forecasting rain and climate change in the DRC, but it also trained the Congolese center’s staff to use rain and flood forecasting systems, analyze aerial imagery, operate Geographic Information Systems (GIS), apply hydrologic modeling and draft technical reports.

In Juba, South Sudan, Egypt established a central laboratory for water quality analysis. The laboratory is the first of its kind to be established in South Sudan. It aims to reduce water pollution, rehabilitate and renovate the main stations, monitor river levels and follow the behavior of rivers in South Sudan. The center also aims to forecast floods, mitigate their effects and increase water levels.

On July 28, Egyptian Space Agency CEO Mohammed el-Qousi stated during a press conference, “Egypt is currently leading a number of African countries in the manufacture of the African Development Satellite Initiative, which would measure climate indications for African countries, reduce threats and control emission rates.”

He added, “Egypt is helping five African countries to participate in the manufacture of the satellite to monitor and control climate change. It has agreed to start building the African Development Satellite. Egypt will also support the training of specialists from African countries in this field.”

Abbas Sharaky, a professor of geology and water resources at Cairo University, told Al-Monitor, “African countries lack the technology and do not have the expertise to forecast rain and climate change.”

“Egypt has made great strides in the field of climate change and forecasting floods and rain, and it aims to share its expertise with African countries," Sharaky said.

He explained that “protecting the African people, especially residents of the Nile Basin countries, from the danger of unexpected floods consolidates Egypt's influence not only on the political front but also on the popular one. This is a crisis that thousands of victims are constantly paying for across African countries.”

Sharaky pointed out that “Egypt is also leading Africa in the climate crisis and making the voice of the continent heard within the international community to increase preparedness for the risks of climate change.”

Egypt's Minister of Environment Yasmine Fouad confirmed during a press conference on June 16, “Egypt has played a prominent role in the climate crisis across the African continent, especially since Africa has not set specific targets when it comes to climate change. This is where Egypt has stepped in.”

Fouad also revealed that a Climate Change Conference will be held in Egypt in November 2022. “The conference is important for Africa, and Egypt will continue to convey Africa's voice to the world to fight climate change.”

Meanwhile, Sharaky added, “Egypt is aware of the major impact of climate change on Africa. It is therefore training African staff on how to predict natural hazards such as floods and torrential rains and manage the climate crisis, which has been a priority on the agenda of the international community.”

Regarding this issue, Medhat Mokhtar, former head of the National Authority for Remote Sensing and Space Sciences, told Al-Monitor, “Egypt hosts many specialists from African countries. It trains them on capitalizing on space sciences and the capabilities available in the Egyptian Space Agency, especially in the field of forecasting climate change. This falls within the African Development Satellite Initiative.”

On July 25, the Egyptian Space Agency hosted leaders and representatives of different African space agencies as part of the African Development Satellite Initiative.

Mokhtar pointed out that “Egypt will be home to the headquarters of the African Space Agency, which brings together many African countries. It will be the launch site for many satellites specialized in monitoring climate change, variations, floods and rain.”

In February 2019, Egypt won the bid to host the African Space Agency at the meeting of African foreign ministers during the African Union's Executive Council session in Addis Ababa.

“Many African countries have asked Egypt to participate and cooperate in the field of space exploration and the launch of satellites to help fight climate change, anticipate risk and prepare for potential incidents," Mokhtar said.