More than 2,300 people have been evacuated since the flash floods erupted in northern Turkey on Wednesday. 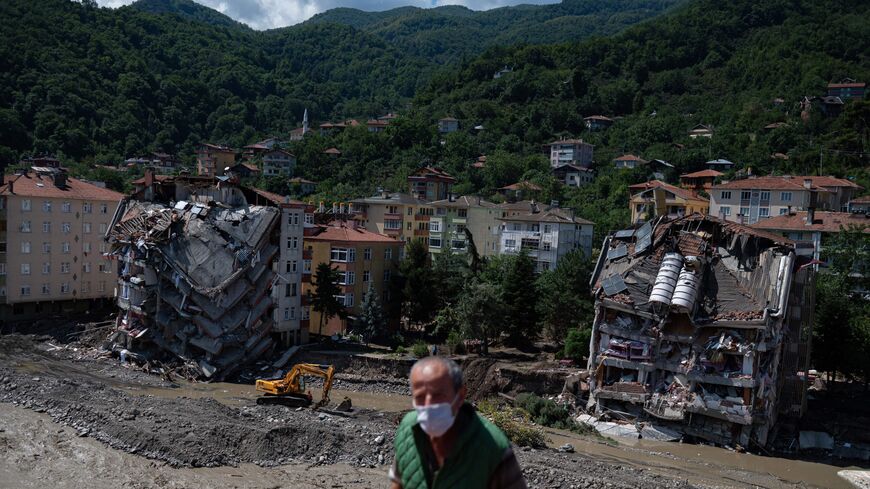 A man stands in the foreground as a mechanical digger works near two collapsed buildings following flash floods the day before in the town of Bozkurt in Kastamonu province in the Black Sea region of Turkey on Aug. 15, 2021. - YASIN AKGUL/AFP via Getty Images

Seventy-four people are dead and dozens more are missing from severe flooding that has battered Turkey’s Black Sea region for nearly a week, authorities said Monday.

The heavy rains and flash flooding have killed 62 people since Wednesday in Kastamonu province, 11 in Sinop province and one in Bartin province, the Disaster and Emergency Management Directorate said Monday.

Some 47 people are unaccounted for in Sinop and Kastamonu and eight people are hospitalized, the disaster agency said.

Some 8,000 people, in addition to more than 80 ambulances and 20 rescue dogs, are assisting with search-and-rescue efforts. The Turkish Defense Ministry also dispatched military vehicles and two ships to a hard-hit town in Sinop to help evacuate residents.

“The flood we experienced is the heaviest one I have ever seen,” Turkish Interior Minister Suleyman Soylu told reporters while touring the affected areas Saturday.

More than 2,300 people have been evacuated, many of whom are being housed in student dormitories. Villages across northern Turkey remain without power nearly a week after strong summer storms downed power lines, toppled homes and wreaked havoc on the region’s infrastructure.

During his visit to the Black Sea village of Bozkurt in Kastamonu province Friday, President Recep Tayyip Erdogan pledged that Turkey “will rise from our ashes again."

“We can’t bring back the citizens we lost, but our state has the means and power to compensate those who lost loved ones,” he said.

The floods are the latest natural disaster to strike Turkey this summer. Wildfires that raged across Turkey’s southern coast killed at least eight people, forced thousands to flee their homes and destroyed swaths of farmland. In addition, eight people were killed when a Russian firefighting plane helping Turkey fight the blazes crashed Saturday.