The floods in Turkey's Black Sea region forced more than 1,700 people to evacuate, many of whom are now sleeping in student dorms. 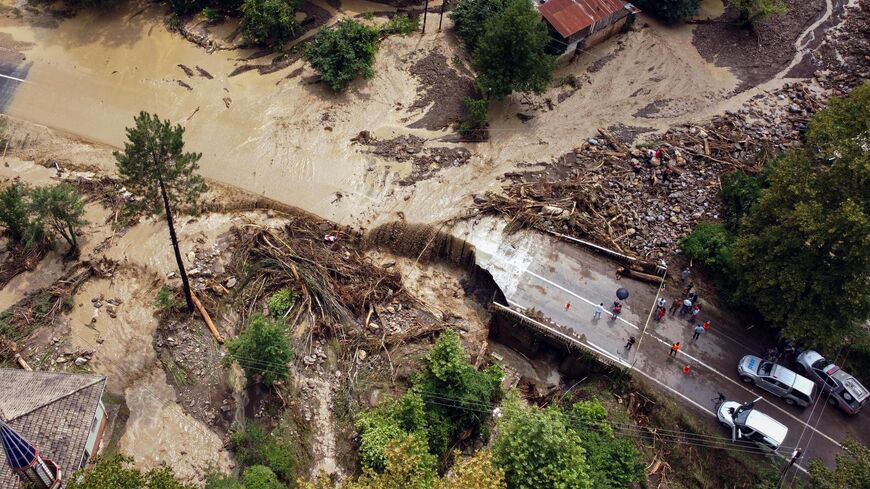 An aerial view shows the destruction in a flooded area following heavy rainfall near Kastamonu, on Aug. 11, 2021. - Demiroren News Agency/AFP via Getty Images

At least 38 people are dead from flash floods and mudslides caused by torrential rain in Turkey’s coastal provinces, authorities said on Friday, following fast-spreading wildfires that wreaked havoc on the country’s south.

Flood-battered towns across the Black Sea region were without electricity on Friday, following what Interior Minister Suleyman Soylu described as "worst flood disaster" he had ever seen. Television footage showed residents stranded on rooftops and partially submerged cars stuck along debris-filled streets.

Authorities say more than 1,700 people have been evacuated, most by helicopters and boats. Student dorms are housing about 740 displaced people, Turkey's disaster and emergency management body said in a statement.

An opposition party leader from Kastamonu said in a televised interview Friday that 329 people are missing.

"We will do our best as a state as quickly as possible, and hopefully we will rise from our ashes again," Erdogan said, according to state-run Anadolu Agency. “We can’t bring back the citizens we lost, but our state has the means and power to compensate those who lost loved ones.”

The flooding is the latest disaster in Turkey, where some 200 wildfires have raged since late July. At least eight people were killed and thousands were evacuated from the fires that erupted along Turkey’s southern coast, including in the popular tourist destinations of Mugla and Antalya provinces.