The explosion near the town of Hasano occurred as fighters were reportedly attending a training on mortars. 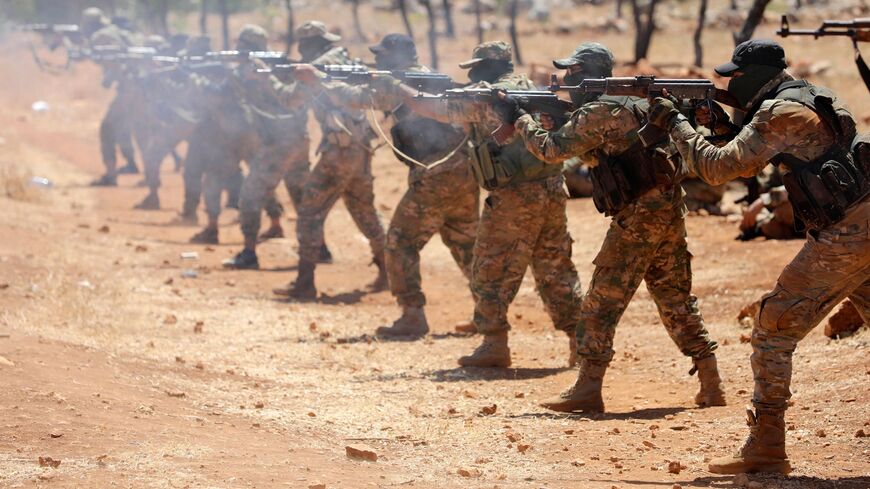 Syrian fighters fire AK-47 rifles during a graduation ceremony for new Hayat Tahrir al-Sham members at a camp in the countryside of the northern Idlib province on Aug. 14, 2018. - OMAR HAJ KADOUR/AFP via Getty Images

At least 10 Syrian fighters are dead and dozens of others wounded following an explosion at a jihadist training camp in rebel-controlled northwest Syria on Tuesday, Reuters reports.​​

Two opposition military sources told the news agency that the blast occurred while Hayat Tahrir al Sham (HTS) fighters were training near the Syrian town of Hasano. An opposition activist said that the explosion in the northern Idlib countryside was caused by an accident during a training session on mortars.

The Syrian Observatory for Human Rights, a UK-based war monitor that supports the opposition, reported that a loud explosion was heard and ambulances could be seen rushing to the HTS camp. The monitoring group said the blast occurred as drones from the US-led coalition were spotted nearby.

Idlib is home to rival rebel factions including Turkey-backed opposition groups and the dominant HTS, which is led by Syria’s former al-Qaeda affiliate and is designated as a terrorist organization by the United States, United Kingdom and Turkey.

Under the pretext of fighting terrorism, the Russian-backed Syrian government launched an air and ground offensive on Idlib that displaced more than 1 million people between December 2019 and early March 2020. Despite a fragile truce declared by Russia and Turkey, the United Nations reports that government airstrikes and shelling have increased in Idlib, northern Latakia, Aleppo and western Hama.

“These developments remind us that the conflict in Syria is far from over,” UN special envoy for Syria Geir Pederson told the Security Council on Tuesday.

The explosion in Idlib occurred as Syrian rebels reportedly began evacuating the southwestern Daraa province under a truce deal negotiated by Russia. The United Nations said Tuesday that clashes in Daraa have displaced more than 38,000 people, over 20,400 of them children, in the past month.