Polish researchers have found a well-planned Christian town dating to the sixth century in northern Egypt. 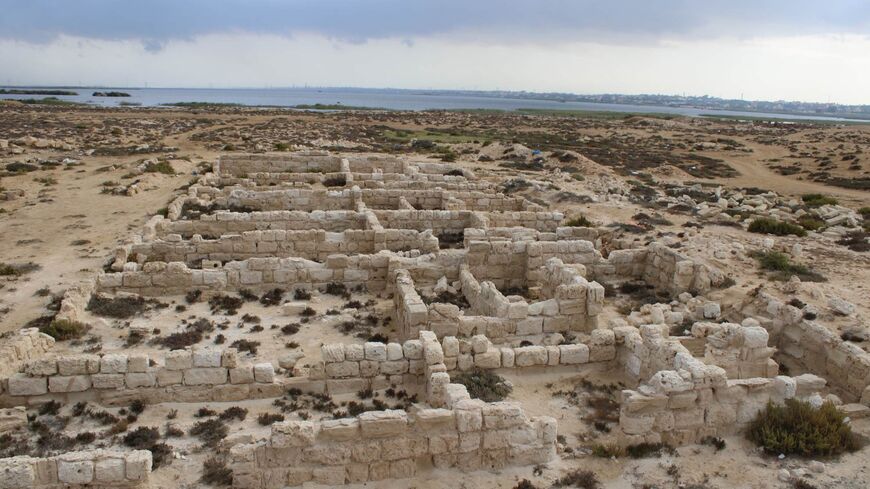 Modular construction of a well-planned ancient Christian settlement is seen near the waterfront of Lake Mariout in northern Egypt. - Mariusz Gwiazda/University of Warsaw's Polish Center of Mediterranean Archaeology

CAIRO — A team of Polish researchers has discovered evidence of a well-planned Christian settlement dating to the sixth century in the ancient Egyptian port city of Marea.

The discovery was made along Lake Mariout about 40 kilometers (25 miles) southwest of Alexandria just a few miles south of the Mediterranean Sea near the present-day village of Hawwariya.

Archaeologists said the settlement also has a building that was used by Christians on pilgrimage to Abu Mena and the tomb of St. Mena, a Coptic martyr associated with healing who died in the late third or early fourth century when Christians were still being persecuted. The Abu Mena World Heritage site is about 17 kilometers, or some 10 miles, south of the Christian settlement, and has a modern monastery. Pilgrims back in the day would have arrived at Alexandria and sailed across the lake to Marea before heading to Abu Mena.

The Christian settlement studied covers an area of about 13 hectares, or 33 acres.

Polish archaeologist Mariusz Gwiazda was quoted by the website Ancient Origins as saying the discovery has “revolutionized our understanding” of the ancient city of Marea, which was founded following the 332 B.C. conquest of Egypt by Alexander the Great.

The Christian settlement appears to have been a well-planned "dense urban area without defensive walls" that was not built until the second half of the sixth century, according to an article published in the August issue of the journal Antiquity. The community's modular building system of one-story structures with duplicate floorplans "and fixed sizes" measuring 14 meters by 10 meters (46 feet by 33 feet) was not typical of that period. The adjoining rectangular modules reached a length of 260 meters (850 feet) and housed residences and shops.

The planned town also had a basilica, two bath areas and five public latrines with sewage channels that drained into the lake. Antiquity also said that words written on pottery indicated the "presence of a nosokomeion, or hospital, a building that became common in the Byzantine period." Research showed the community had a "complex system of straight streets with adjoining buildings serving various functions and an artificial waterfront linked to an extensive port infrastructure."

Marea was an industrial center and port, and was inhabited during the Hellenistic (which started in the wake of Alexander the Great’s death), Roman, Byzantine and early Islamic eras. The Abu Mena pilgrimage site was essentially destroyed during the Muslim conquest in the second quarter of the seventh century.

The discovery of the planned town was an eye-opener for archaeologists because the Romans had built so much that there seemed little need for more major construction. The Express newspaper quoted Gwiazda as saying, "It was a great surprise for us because new towns weren't being built in Egypt at the time."

The Polish archaeologist said the town was likely built on what had been a Roman vineyard. The community's basilica was constructed on the location of a previous church, which itself was built on land that been a workshop for making vessels to make wine, according to Antiquity.

The archaeologists work under the auspices of the University of Warsaw's Polish Center of Mediterranean Archaeology. Using modern technology, they carried out a comprehensive search of the site via non-invasive methods, innovative probing techniques and more traditional excavation, according to Antiquity and Ancient Origins.

Egyptologist and director of the Antiquities Museum of Bibliotheca Alexandrina Hussein Abdel Basir told Al-Monitor via phone that the importance of the newly discovered settlement lies in the fact that it is a confluence of Greek, Roman and Byzantine civilizations.

He added that wine production in the area “allowed commercial and cultural exchange, and led to the emergence of a large settlement and buildings, which confirms the greatness of this site in the past.”

Bassam al-Shamaa, a historian and Egyptologist, told Al-Monitor via phone, “The significance of the discovery comes from the fact that it complements the graph of the history of cities, starting with the oldest places where humans lived, such as Thebes in the Pharaonic era, all the way to Alexandria, which was built by Alexander the Great of Macedonia.”

He said the discoveries are important in that they help broaden knowledge about Egypt. He also said, “The toilets were also set in a location away from houses, which proves that the city was developed for its time.”

Shamaa added that while discoveries of mummies and the bodies of kings have been extensively researched, “We still don’t know much about the daily life and customs of people in these ancient times in ancient Egypt and many are eager to learn more about this.”

Abdel Basir said it is important to promote the discovery in the United States and Europe and countries that profess Christianity, “which would contribute in bringing in tourists from those countries to learn about Christians who lived in Egypt.”

Shamaa also said he thought it would be important to include the urban settlement in the country's tourism program as tourists would be interested in visiting the site.