Raam leader Mansour Abbas' visit to the Foreign Ministry in Jerusalem was anything but ordinary. 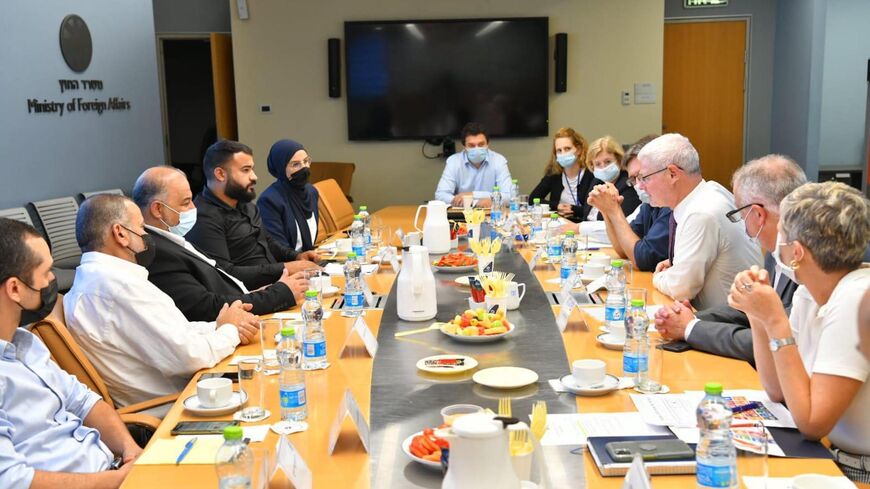 Raam leader Mansour Abbas and his colleague Waleed Taha visited the Foreign Ministry in Jerusalem Aug. 8 and met with Foreign Minister Yair Lapid. The visit included a briefing on the ministry and its different diplomatic activities.

"Today, we toured the Foreign Ministry and got acquainted with its professional staff, with the purpose of creating a framework that could especially serve and benefit Arab citizens and students. We thank Foreign Minister Lapid, the ministry’s CEO Ushpiz and all the ministry staff,’’ said Abbas after the visit. Lapid thanked Abbas and Taha for the visit, noting that the ministry deals with several issues that are pertinent to Arab-Israeli society, which is why it was so important to exchange views and opinions with the two Arab legislators.

Abbas' visit was exceptional, perhaps the first such by an Arab-Israeli Knesset member. Clearly, it marks a significant shift in the way the Israeli government perceives Arab society, particularly Arab-Israeli lawmakers.

The rare visit took place a week after the government's approval of Israel’s 2021-2022 state budget. Mazal Mualem noted for Al-Monitor that the approval was a personal victory for Abbas. Not only did he manage to double the budget allocated for Arab society, but he was the one to decide how the budget will be divided between the different cabinet ministries.

The decision to host Abbas sends a strong signal. Lapid is not just the foreign minister but also the alternate prime minister and will take over the premiership in less than two years. Looking back, it was Lapid and his close associates who negotiated with Abbas over joining the coalition headed by Naftali Bennett. By inviting Abbas to his ministry, Lapid sent a message that the Raam Party is indeed a full member of the coalition and not just a way to guarantee a Knesset majority, and actively participate in the shaping of the government’s policies.

Last month, the Foreign Ministry opened a new cadet course. Such courses open every year or two, depending on the ministry’s staffing needs and budget. But 2021 is special for several reasons. First, it is the largest cohort since 1995, when the course included over 40 cadets under Prime Minister Shimon Peres, who was convinced that the 1993 Oslo Accord would bring about the opening of embassies across the Middle East. This time, 25 cadets, including a member of the Armenian community and a Druze, are taking part in the ministry’s training course as Israel opens missions in several Arab and Muslim countries.

Addressing the diplomats-to-be, Lapid noted that it's important for the cadet course to reflect all of Israeli society. By his own admission, with diplomatic missions opening in the United Arab Emirates, Bahrain and Morocco, Israel must include its Arab citizens in its efforts to connect with citizens of Arab and Muslim countries.