The general impression is that Ankara’s commitment to protect Kabul airport is only aimed at winning favor with Washington. 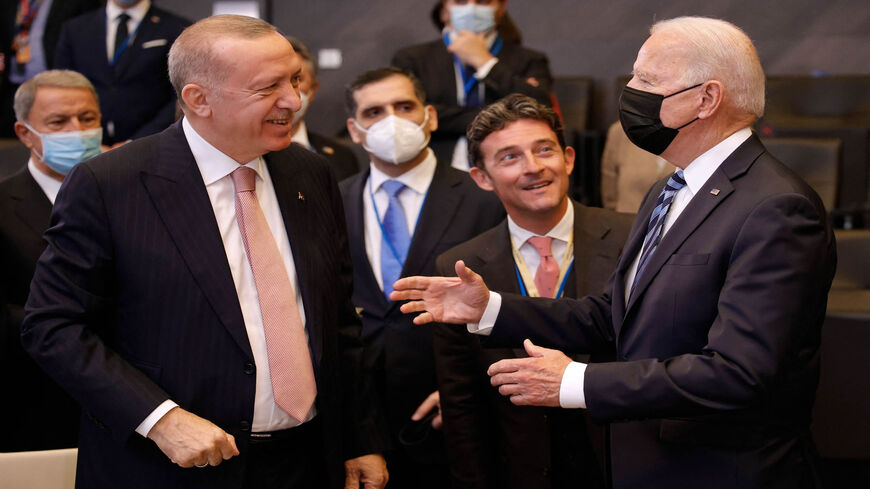 Many Turks are deeply concerned over President Recep Tayyip Erdogan’s readiness to commit Turkish forces to provide the security at Kabul airport — despite the inherent dangers of such a mission — following the departure of US forces from that country.

The question is also being conflated with that of the dramatic increase in the number of Afghan refugees currently heading for Turkey, in the wake of US President Joe Biden’s decision to pull US forces out of Afghanistan.

The issue is causing an increasingly ugly political domestic debate between the Erdogan administration and the opposition, and also stoking racist sentiments among Turks against Arabs and Afghans.

To most seasoned Turkish diplomats, Erdogan’s willingness to take on the task of protecting Kabul airport is simply another one of his ill-conceived projects.

“To start with, nobody knows for sure whether this was Ankara’s offer or Washington’s suggestion,” wrote retired Ambassador Ali Tuygan in his Diplomatic Opinion blog.

“But the general impression is that this was an offer by the Turkish government to cajole Washington into a more understanding attitude on Turkish-American differences by putting Turkish troops in harm’s way,” he continued.

Turkish-American ties have been clouded for quite some time with multiple issues, including the question of Ankara’s purchase of Russian-made S-400 anti-missile defense systems that has resulted in US sanctions and other punitive measures being slapped on Turkey.

This has also contributed significantly to the serious downturn of the Turkish economy, as a result of which Erdogan and his Justice and Development Party are said to be losing domestic credibility.

The expectation in government circles appears to be that any improvement in Turkish-US ties will also help the Turkish economy, thus shoring up Erdogan’s domestic support.

Ankara has also been seeking means to improve ties with Israel in order to facilitate better ties with Washington.

Retired Ambassador Suha Umar believes that Erdogan’s decision to take on the security of Kabul airport is a sign of desperation.

“This is an act that is based more on necessity than anything else,” he told Al Monitor, pointing at Turkey’s economic crisis as well as Ankara’s weakened hand on the international stage.

“For a country in this situation to undertake such a mission that is fraught with uncertainty — and which will require resources in every respect — does not appear sensible,” Umar said. “All that is left is a situation that reflects desperation.”

The end result, it is feared, will be that Turkish forces will be placed at risk while Erdogan’s adventurism drags the country into a quagmire.

“Would this put Turkish troops in harm’s way? Yes, definitely. Because the Taliban does not have to take over Kabul to disrupt the functioning of the airport, it has many other means at its disposal,” Tuygan wrote.

Meanwhile, Erdogan’s approach to the whole question also appears to be deeply confused and riddled with contradictions.

Erdogan is trying to reach out to the Taliban, on the one hand, by using Islamic rhetoric and castigating “imperial powers” that he accuses of having meddled in that country for decades.

On the other hand, he is calling on the principal target of his anti-imperial rhetoric, namely the United States, to provide financial and logistical support for the Turkish military mission at Kabul airport.

How he expects the Taliban not to see through this glaring contradiction is anyone's guess.

The Taliban clearly sees Turkish forces in Afghanistan as an extension of the US-led NATO mission in that country and has already used threatening language in calling on Turkey to also withdraw its troops.

Erdogan, nevertheless, appears to be relying on Sunni Islam as the lowest common denominator that will facilitate talks between Ankara and the Taliban.

“Turkey and the Taliban should be able to conduct these talks easily since there is nothing out of keeping with Turkey’s beliefs and their beliefs,” Erdogan told reporters recently during a visit to northern Cyprus.

Not surprisingly, these remarks created uproar among secular Turks who are castigating Erdogan for placing Turkey and the Taliban in the same category.

Even some of Erdogan’s staunchest supporters like Hurriyet columnist Ahmet Hakan have rejected the notion of any equivalence between the practice of Islam in Turkey and the radical Islamic outlook of the Taliban.

Hakan nevertheless argued that Turkey’s Islamic character could facilitate a dialogue with the Taliban.

In criticizing Erdogan’s remark, liberal commentator Taha Akyol, however, stressed Turkey’s democratic and secular character as a social state based on the rule of law.

“Are we not going to remain [in Afghanistan] under NATO’s umbrella?” Akyol also asked in his column for Karar daily. “It is wrong to look at the matter from the perspective of faith and to think that there is nothing out of keeping [between Turkey and the outlook of the] Taliban."

Erdogan’s notion that Islam will bring Turkey and the Arab world closer also turned out to be a fallacy. This is clearly evident in the minimal support Ankara is getting from the Arab world over its involvements in Syria and Libya.

Umar pointed out that Ankara may be expecting the decision to take on the security of Kabul airport to improve ties with Washington, but stressed that the conditions for securing such an improvement are very different.

“If it could fulfill these conditions there would be no need for Turkey to take on any extra risks,” he said. He noted that taking on such extra risks is unlikely to improve ties with the United States.

Trying to appease the Taliban by claiming that Turkey and the Taliban share similar outlooks with regard to faith is also likely to stoke American suspicions regarding Turkish intentions.

“What this translates into as far as the West is concerned is this: ‘We share the same outlook as your enemies.’ It is very difficult to understand what kind of reasoning or policy this represents,” said Umar.

“One has to question the reliability of an ally who admitted last week that Turkey ‘does not have any conflicting issues with [the Taliban's] beliefs,’ wrote Aykan Erdemir from the Foundation for Defense of Democracies.

“These comments ought to serve as red flags amid ongoing negotiations between Ankara and Washington over Erdogan's offer to deploy Turkish troops to guard Kabul's international airport after US departure,” Erdemir continued in an opinion piece for Newsweek.

With so many outstanding questions that remain unanswered, the domestic debate in Turkey —laced with much anger and recriminations — will only grow in the coming days and could leave Erdogan with much less in hand than he expected to gain with his Afghan gambit.