Syria's last rebel stronghold has seen an uptick in government attacks, with at least 10 children killed in the past two weeks. 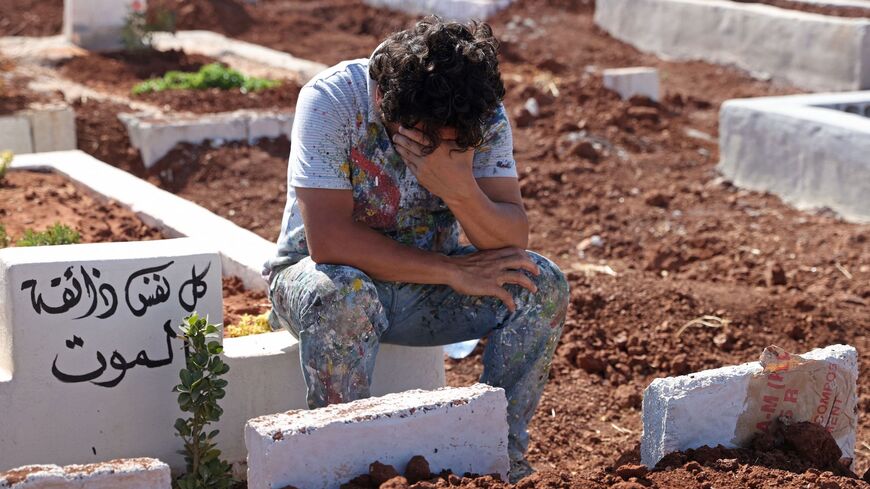 A relative mourns over the graves of three children who were killed in regime artillery shelling on the outskirts of al-Foua at a cemetery in Binnish in Syria's rebel-held northwestern province of Idlib on July 15, 2021. - OMAR HAJ KADOUR/AFP via Getty Images

At least nine civilians, including three children, are dead following government shelling on towns in the opposition-controlled northwest of Syria, the United Nations and rescue workers said Thursday.

The Syrian Civil Defense, also known as White Helmets, said artillery shelling on the town of al-Foua in eastern Idlib province killed six civilians, including a child, and injured eight others.

Elsewhere in Idlib, the rescue organization said laser-guided artillery struck the village of Ibleen, killing a mother and her child, as well as another child. Four other children were injured when their home was hit, the White Helmets said.

The UN children’s agency, UNICEF, also confirmed that three children in Idilb were killed in two separate attacks on Thursday. In the past two weeks alone, UNICEF says at least 10 children have been killed.

“This is a terrifying sign that violence is coming back to Syria. Communities face a serious risk of losing the little respite they had during the lull in violence,” said Ted Chaiban, UNICEF’s regional cirector for the Middle East and North Africa.

6 civilians including a child were killed this morning, and 8 others were injured by artillery shelling attacks by the regime forces and Russia on the town of #AlFoua in #Idlib, bringing the death toll today to 9 civilians so far, including 3 children and a woman. pic.twitter.com/BK4nP0kR3h

A cease-fire struck between Russia and Turkey in March 2020 was meant to quell the fighting, but Idlib has seen an uptick in government airstrikes in recent weeks. President Bashar al-Assad has vowed to retake the country’s rebel stronghold, which hosts a number of rival opposition groups, including Turkey-backed fighters and the hard-line Hayat Tahrir al-Sham.

But the region is also home to more than 3.4 million civilians, 1.7 million of them children. Bloody government offensives targeting Idlib in recent years have created the decade-long war's worst humanitarian crisis, with more than 1 million people forced to flee their homes. Three-quarters of the population relies on outside aid to survive, the UN says.

On Friday, the UN Security Council voted to renew a cross-border aid operation into northwest Syria, without which aid agencies said millions of civilians would lose access to life-saving humanitarian assistance.