The UN's chemical weapons watchdog warned Syria's government not to move or tamper with the gas canisters recovered at Douma. 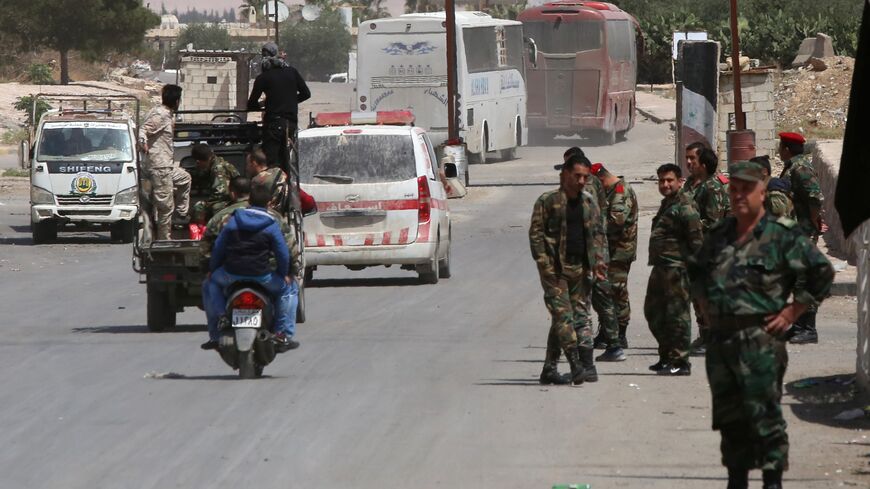 Pro-Syrian government forces gather around buses carrying Jaish al-Islam fighters and their families from their former rebel bastion of Douma as they arrive at the Syrian government-held side of the Wafideen checkpoint on the outskirts of Damascus, after being evacuated from the last rebel-held pocket in eastern Ghouta on April 9, 2018. The evacuations came after accusations Syria's government had used toxic gas on Douma, which the regime denied. - YOUSSEF KARWASHAN/AFP via Getty Images

The cause, Syria’s government reported, was an Israeli airstrike on previously sealed underground tunnel at a suspected chemical weapons facility some 60 kilometers (37 miles) away from where international investigators had last examined the evidence.

The Organization for the Prevention of the Use of Chemical Weapons (OPCW) reported Friday that two gas cylinders found at the site of the Douma chemical attack were reported to have been destroyed June 8. The OPCW also published the Syrian government’s communique blaming an Israeli airstrike for their destruction.

“The Secretariat additionally recalled that it had previously advised the Syrian Arab Republic that it was not to open, move, or alter the containers or their contents in any way without seeking the prior written consent of the Secretariat,” the report read.

“The Syrian National Authority did not notify the Secretariat that the cylinders had been moved to a new location until it reported their destruction,” it continued.

The two canisters were previously examined by OPCW investigators before being stored in Syria after government officials refused to allow international investigators to remove them from the country.

A spokesperson for the OPCW was not immediately available to return Al-Monitor’s request for comment.

The attack in Douma, a suburb of Damascus, drew international condemnation and US-led international military retaliation against the regime of Syrian President Bashar Al-Assad.

Footage of the attack’s aftermath suggested at least two gas cylinders were dropped on apartment buildings in the area. The April 7, 2018, attack killed at least 50 people and injured more than 100. Rebels in the area surrendered just one day after the attack.

More than 300 chemical weapons attacks have been documented in Syria’s civil war, with a number of the deadliest attacks attributed by experts and rights’ groups to the Assad regime.

The OPCW’s fact finding mission for Douma has not assigned blame for the attack, which has been the subject of a disinformation campaign reportedly backed by Russian intelligence. Russia, Assad’s main foreign backer, has long blamed Syrian rebels for such attacks.

Syria’s government has not fully complied with a 2013 agreement brokered by the United States and Russia aiming to rid the country of chemical weapons, subsequent OPCW findings have suggested.

The organization concluded in April that there are “reasonable grounds to believe” Syria’s air force dropped at least one canister in an attack just two months prior to the Douma incident.