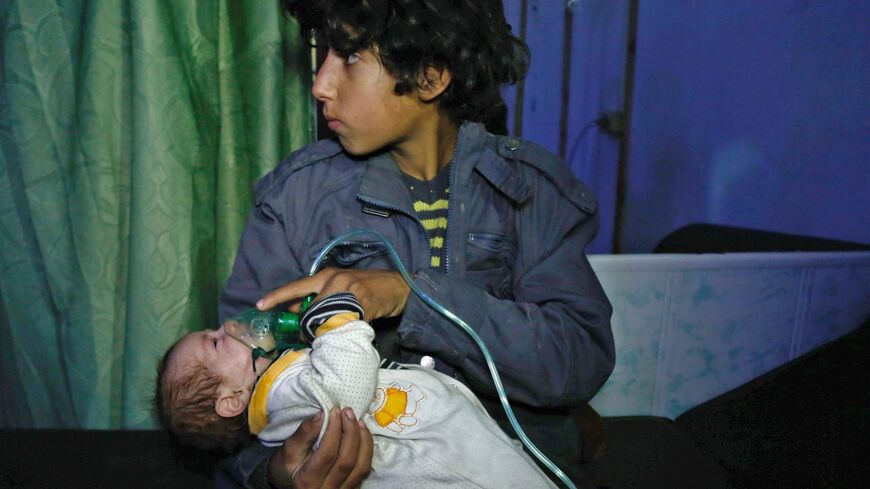 A Syrian boy holds an oxygen mask over the face of an infant at a makeshift hospital following a reported gas attack on the rebel-held besieged town of Douma in the eastern Ghouta region on the outskirts of the capital Damascus on Jan. 22, 2018. - HASAN MOHAMED/AFP via Getty Images

A new report from the global chemical weapons watchdog found there are “reasonable grounds to believe” the Syrian air force was behind a 2018 chlorine gas attack on a residential part of rebel-held Idlib province.

The Organization for the Prohibition of Chemical Weapons (OPCW) concluded that a military helicopter under the control of Syria’s elite Tiger Forces in February 2018 dropped at least one cylinder, dispersing the toxic gas over the Saraqib neighborhood of al-Talil.

There were no casualties in the alleged attack, but OPCW’s investigation confirmed 12 people displayed symptoms consistent with chlorine exposure including shortness of breath, skin irritation, chest pain and coughing. Eleven were treated at a field hospital in the town of Sarmin, as the closest hospital in Saraqib had just been bombed.

President Bashar al-Assad has long denied using chemical weapons during the country’s decade-long civil war, despite a body of evidence from rights organizations, journalists and witnesses documenting such attacks by government forces.

Damascus, which ratified the international Chemical Weapons Convention in 2013, says it handed over its entire stockpile of chemical weapons as part of a disarmament deal that year.

There was no immediate response from the Syrian government to the latest report.

The report released on Monday marks only the second time OPCW has assigned blame for chemical weapons use in Syria. In April 2020, the watchdog said the Syrian government was likely responsible for three separate aerial attacks that dropped chlorine and the nerve agent sarin on the opposition-held village of Ltamenah in March 2017.

Prior to that report, OPCW only reported whether chemical attacks occurred, not who perpetrated them. The OPCW’s 193 member states will vote this month on whether to suspend Syria’s voting rights in the group, a possibility strongly opposed by the regime’s chief ally Russia.

Months after the Saraqib attack, a chemical attack blamed on the regime in the town of Douma, east of Damascus, killed at least 40 civilians. The April 2018 incident prompted limited missile strikes from the United States, United Kingdom and France on Syrian military targets.