Iraq has long suffered from electricity cuts, which make life unbearable during the sweltering summer months. 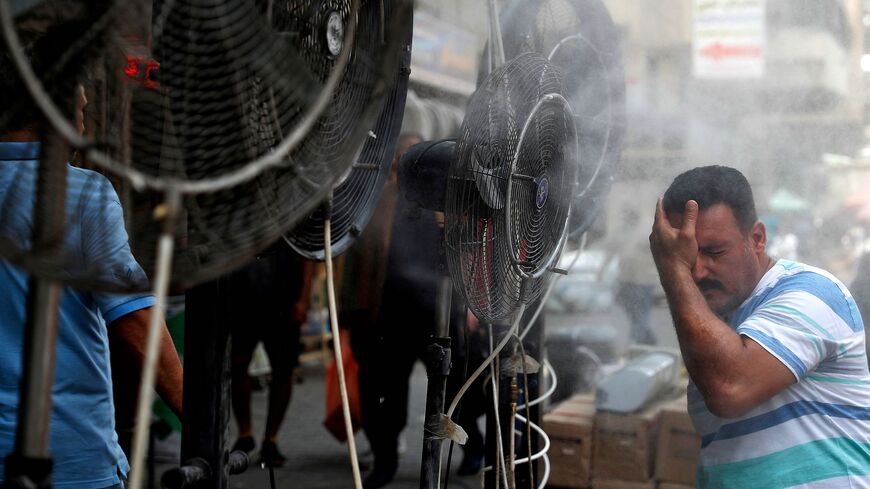 A man stands by fans spraying water vapor to cool pedestrians along a street in Iraq's capital Baghdad amid a severe heat wave June 30, 2021. - AHMAD AL-RUBAYE/AFP via Getty Images

Protests broke out in Iraq today amid scorching hot temperatures as well as electricity and water cuts.

The temperature in the capital Baghdad was as high as 48 degrees Celsius (118 Fahrenheit) on Friday, according to AccuWeather. The situation in the country was compounded by hours-long electricity and water cuts.

During Iraq’s hot summer months, air conditioning and water-based fans can be the only reprieve. One video posted on a popular Iraqi Telegram channel showed a mob of men crowded around an ice vendor in the southern al-Qadisiyyah province during the water and electricity cuts in the area.

Electricity cuts occur throughout the year in Iraq, prompting many people to rely on gas-powered generators for around-the-clock power, though some cannot afford them. Generators often power whole neighborhoods and are paid for by residents. The cuts worsen in the summer months, when power needs are higher.

Some reasons for the recent cuts include insufficient supplies of gas and attacks on power lines, according to Iraqi media outlets. The Islamic State sometimes targets power lines in the country.

There was a protest in the Iraqi capital Baghdad against the lengthy electricity cuts, Reuters reported.

Iraqi Prime Minister Mustafa al-Kadhimi vowed to fix the electricity woes “quickly” on Friday. Kadhimi also dismissed the director of Iraq’s national electricity company, according to statements from his office.

The Erbil-based news outlet Rudaw reported on Friday that electricity had been restored to some areas in central and southern Iraq.