Protests against the government and frequent power outages are continuing amid Iraq's highest temperatures on record. 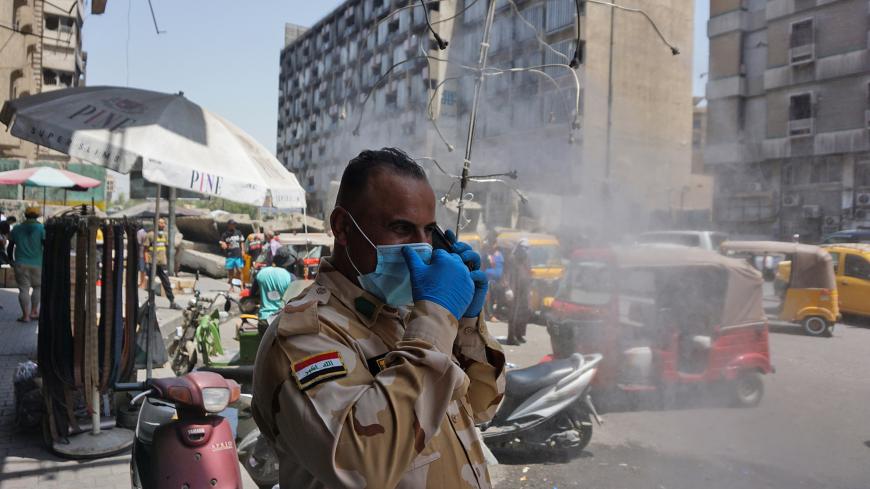 An Iraqi policeman, wearing a protective mask and gloves due to the COVID-19 pandemic, stands by a water sprinkler on a hot summer day in Baghdad on July 7, 2020. - SABAH ARAR/AFP via Getty Images

Iraqis are contending with record-breaking temperatures and a poorly functioning electricity system as a heat wave sweeps across the country.

“I felt a burn on the street when I walked home,” Erbil resident Ali Abdulwahid told Al-Monitor.

On Tuesday, the Iraqi capital, Baghdad, recorded an all-time high temperature of 125 degrees Fahrenheit (51.7 Celsius), according to the weather forecasting service AccuWeather.

Though no records were broken Thursday, there was not much relief from the scorching temperatures. The high in Baghdad was 120 degrees Fahrenheit (48.9 Celsius) Thursday. The high in Erbil, the capital of the Kurdistan Region farther north, was also 120. The high in the southern city of Basra was 125, according to Accuweather.

One video circulating among Iraqis on WhatsApp showed smoke rising from the dirt on the side of a road in Baghdad due to the heat.

Iraq is not the only country in the region to reach such temperatures. Many Gulf states are similarly hot. However, the Iraqi summer is particularly unbearable due to the poorly functioning government-run electrical grid. Frequent power cuts mean people must rely on generators, but these often cannot power cooling systems. This means that many Iraqis must brave the heat without air conditioning, fans and water-based coolers for much of the day.

Nibras Khalil lives in the northern city of Bashiqa. He said they usually have power around 16 hours a day, but sometimes it is less than 12. "To stay cool, I had to take shower and sleep on ground to make my body cool,” Khalil told Al-Monitor. “It’s the hottest year I’ve seen.”

Abdulwahid said if there is no electricity, he simply looks for “shadows” and then stays in the shade.

The electrical system's failings is fueling ongoing anti-government protests in the country. There was a protest against electricity shortages in Baghdad this week. There were similar protests against poor services Thursday in Basra and Dhi Qar in the south, according to the pro-protest #Save_The_Iraqi_People channel on Telegram. Many Iraqis criticize the government for failing to provide adequate electricity, especially given Iraq’s oil wealth.