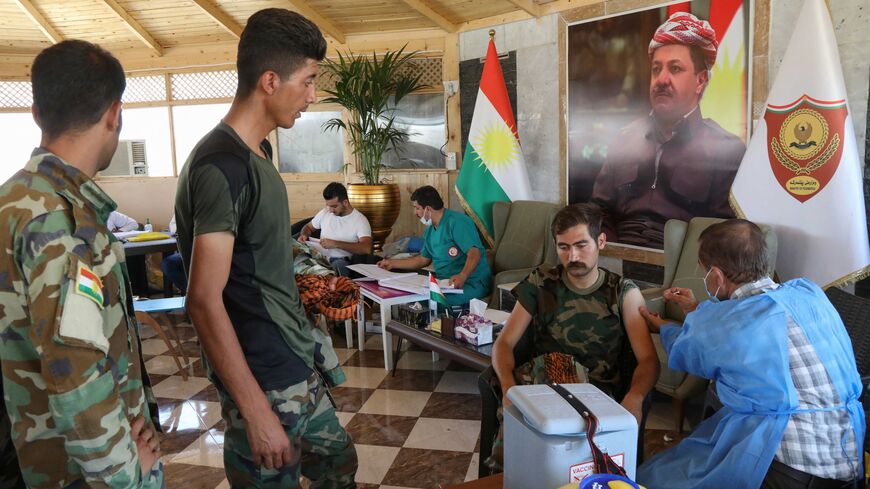 A member of the Iranian Kurdish Freedom Party of Kurdistan gets inoculated with a dose of the AstraZeneca vaccine against the coronavirus at a vaccination center in Altun Kupri, some 40 kilometers (25 miles) south of Erbil, the capital of the autonomous Kurdish region of northern Iraq, on July 10, 2021. - SAFIN HAMED/AFP via Getty Images

The first case of the Delta variant of the coronavirus has been detected in the Kurdistan Region of Iraq, according to local media.

The World Health Organization considers the Delta as well as other variants of COVID-19 to be more easily transmissible, according to its latest data. Experts have not determined the Delta variant is any more dangerous than the original virus strain, however.

The Kurdistan Region is currently registering more than 1,000 COVID-19 cases a day; the all-time daily high of 1,600 occurred in late October, per KRG virus data. Several virus mitigation measures are in place in the autonomous part of northern Iraq, including a ban on parties and a mask-wearing requirement in indoor public spaces.

Several Middle Eastern states have instituted restrictions recently due to the coronavirus variants. In late June, Israel reimposed its indoor mask mandate. Around the same time, Turkey banned flights from several countries. In July, the United Arab Emirates also banned its citizens from traveling to countries with documented variant transmission.