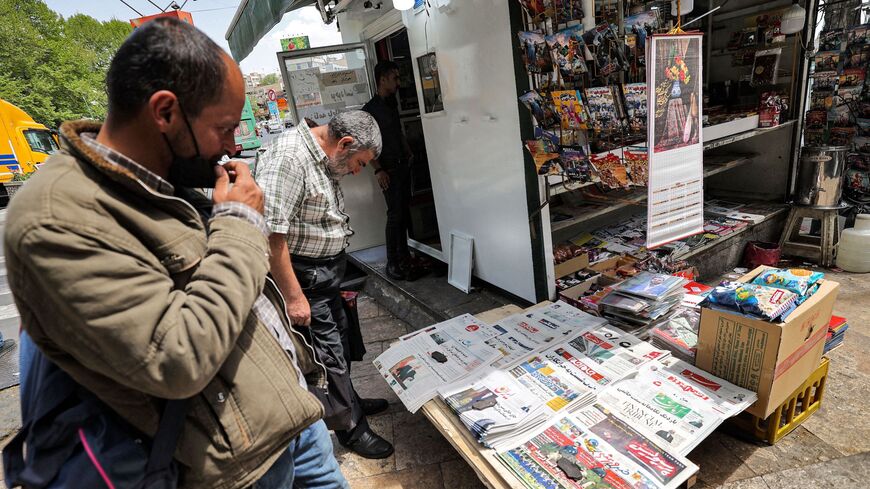 Men view the covers of local newspapers laid out at a stall in the Shemiran district of Iran's capital Tehran on April 14, 2021. - ATTA KENARE/AFP via Getty Images

Iran blamed Israel for an alleged attack on one of its nuclear facilities last month, accusing its archrival on Tuesday of trying to derail nuclear talks between Tehran and world powers.

On June 23, Iran claimed to have thwarted a “sabotage” attack on a civilian nuclear facility in Karaj, a suburb about 25 miles (40 kilometers) northwest of the capital. State media outlets said at the time that there was no damage or casualties from the attack on the building belonging to Iran’s Atomic Energy Organization.

A private Israeli intelligence group’s analysis of recent satellite photos, however, suggested last month’s attack had caused extensive damage to the Karaj site, according to the Kan public broadcaster.

Iranian government spokesperson Ali Rabiei acknowledged on Tuesday that the building’s ceiling had suffered some damage in the attack.

“A hole appeared on the ceiling of one of the industrial sheds, so the roof was removed for repairs,” Rabiei said, according to state-run news agencies. “Damage to equipment was not remarkable.”

The apparent attack came as Iran, the United States and the nuclear accord’s original signatories hold talks aimed at salvaging the nuclear accord that President Donald Trump abandoned in 2018. The Biden administration seeks to rejoin the deal, known as the Joint Comprehensive Plan of Action, but the two sides disagree on which country should make the first move to come back into compliance.

After negotiators wrapped their sixth round of talks in Vienna, a senior State Department official said a deal is possible but “serious differences” remain between Tehran and Washington. It’s unclear which sanctions the United States is prepared to lift in exchange for Iran rolling back its violations of the nuclear accord.

Rabiei accused the Israeli government, which has long opposed the nuclear accord, of trying to undermine the diplomatic efforts underway in the Austrian capital.

“The Zionist regime carried out these actions to signal it can stop Iran and to say that there is no need to talk with Iran,” he said. “But whenever sabotage has happened, our strength has increased.”

Israel has been linked to a number of attacks on Iranian military and civilian infrastructure, including a blast that caused a fire at the Natanz uranium enrichment facility in July 2020. The Jewish state was also suspected in a blackout at the same underground site in April 2021.

Iran blamed Israel for the November 2020 assassination of its top nuclear scientist, Mohsen Fakhrizadeh, and in March, the Wall Street Journal reported that since late 2019 Israel has struck at least a dozen Iranian vessels carrying oil to Syria.