The statements between Egypt and Ethiopia escalated ahead of the second stage of filling the Grand Ethiopian Renaissance Dam, as experts warn of the repercussions of dwindling coordination between Cairo and Khartoum on the matter. 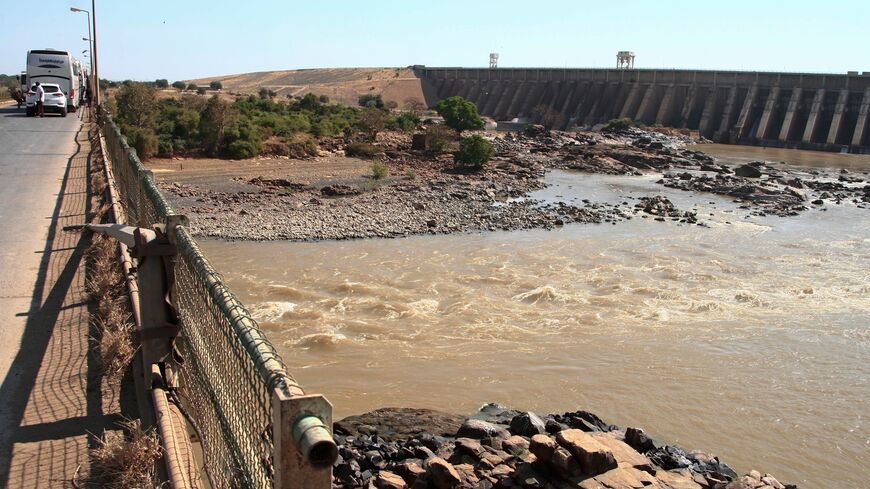 Sudan, which wants the Grand Ethiopian Renaissance Dam to help protect its own Roseires Dam, appears to have diverged from Egypt on what to do about the second filling of the Ethiopian dam. Here, the Roseires hydroelectric dam is seen on the Blue Nile at al-Damazin in southeastern Sudan, on Nov. 27, 2020. It is about 105 kilometers (65 miles) east of the Ethiopian dam. - EBRAHIM HAMID/AFP via Getty Images

Egypt has once again warned Ethiopia over the continued failure to reach an agreement on filling and operating its controversial Grand Ethiopian Renaissance Dam. Addis Ababa is building the dam on the Blue Nile, the main tributary of the Nile River.

Egyptian Foreign Minister Sameh Shoukry said in televised statements June 26 that Egypt has turned to the Security Council as a last recourse in its diplomatic efforts to resolve the dispute. He said that should the UN Security Council convene to discuss the dam issue and Ethiopia does not abide by its recommendations, Egypt will have exhausted all peaceful methods.

Shoukry’s statements portend a possible escalation between the two countries amid rising concerns over a military conflict breaking out in an already troubled region.

Shoukry expects the Security Council to discuss the dam dispute during the second week of July. He said, “If we do not reach an agreement after all these efforts, we will have exhausted all the peaceful means and the extent of intransigence and absence of political will from the Ethiopian side as well as the extent of flexibility by Egypt and Sudan will be revealed to the international community.”

Egypt and Sudan recently sent separate letters to the Security Council urging it to intervene in the dispute by holding an emergency session to discuss the matter and convince Ethiopia to back off on the second stage of filling the dam’s reservoir until Addis Ababa reaches a legally binding agreement with the two downstream states.

Ethiopia rejected the proposition to internationalize the conflict over the dam and wrote in a June 23 letter to the Security Council that the dam issue is outside the council's mandate. Ethiopia also accused Sudan and Egypt of undermining the ongoing negotiations under the auspices of the African Union.

Ethiopia is planning on filling the dam’s reservoir during the coming rainy season in July and August, regardless of whether an agreement is reached. Ethiopia already completed the first stage of filling the reservoir to 4.9 billion cubic meters last year, alarming Sudan and Egypt.

In June 2020, the Security Council held an open session on the dispute, upon Egypt’s request, and urged the three countries to reach a consensus and not to take unilateral measures. The three countries agreed to proceed with the negotiations under the African Union.

However, African Union efforts to broker a deal have failed repeatedly. In the latest round held in the Democratic Republic of Congo capital of Kinshasa in April, each side accused the other of obstructing the talks.

Hani Raslan, head of the Nile Basin Studies Unit at Al-Ahram Center for Political and Strategic Studies, said that internationalizing the issue will push the international community to pressure Ethiopia to return to the negotiations and reach an agreement.

Egypt and Sudan have repeatedly called for international mediation by a quartet made up of the United Nations, the European Union, the United States and African Union. Ethiopia insists that the African Union do the job.

Egypt and Sudan want a legally binding agreement for filling and operating the dam that entails an effective and binding mechanism to settle future disputes. Ethiopia is willing to agree only to nonbinding guiding principles.

An Ethiopian general questioned Egypt’s ability to destroy the dam. The director of the Engineering Department at the Ethiopian Defense Ministry, Gen. Buta Bachata Debele, told RT June 25 that his country is not seeking to resolve the dam crisis with Egypt and Sudan militarily, but it is ready for such a scenario. He added, “We are ready to repel any enemy that tries to undermine our sovereignty. We are ready to defend.”

Shoukry described Debele’s statements as “provocative.” He said they show Ethiopia is trying to impose its one-sided will regarding operating and filling the dam.

“We always seek peaceful means,” Shoukry said in televised statements June 25, adding that Egypt will not stand idly by if its water interests are compromised.

Tarek Fahmy, a professor of political science at Cairo University, said that Ethiopia seeks to draw Egypt into a vicious circle of statements and counterstatements that waste time and essentially run out the clock.

He told Al-Monitor that Ethiopia is trying to confuse decision-makers in Sudan and Egypt and take advantage of the lack of coordination between them. He said Egypt’s efforts to get Sudan to play a significant role in placing "ongoing pressure on Ethiopia have apparently failed. Sudan is still not responsive.”

On June 27, Sudan said it has conditionally accepted, in principle, a partial interim agreement proposed by the Democratic Republic of the Congo, the African Union’s current chair, to fill the dam.

Sudan’s conditions are for the agreement to hold for six months and include international guarantees. Ethiopia would commit to signing off on everything that was agreed on previously, on condition that the interim agreement does not mention water-sharing. Cairo has yet to comment on Sudan’s conditions.

Sudan and Egypt agreed in early June to coordinate their efforts to push Ethiopia to negotiate seriously to reach an agreement. Officials of the two countries agreed that the agreement should be comprehensive, but Sudan’s acceptance of an interim agreement indicates a possible shift in this position.

Although Ethiopia sees the dam as crucial to its economic development, Egypt fears the dam will negatively affect its share of Nile water, which meets more than 95% of Egypt's freshwater needs.

While Khartoum sees benefits from the dam in the form of the regulation of Blue Nile waters and the electricity it will provide, Sudan wants guarantees about the safe operation of the Grand Ethiopian Renaissance Dam to protect its own dams, including the Roseires Dam, Sudan's largest.

Raslan said he thought Ethiopia would not accept Sudan's conditions. Raslan also said the timing of the announcement of Sudan's proposal shows that the Sudanese negotiating delegation is not seeing the big picture clearly.

Fahmy said, “Sudan is changing its stances based on its interests … but Ethiopia is taking advantage of this to involve Egypt and Sudan in a series of useless partial agreements to gain time and force them into a de facto situation.”

Sudan did reject an Ethiopian proposal for the second filling of the dam.

He added, “All the current indications show that the negotiations will not be resumed in the foreseeable future. The Egyptian administration therefore has all options open. I think the military option is now more pressing than ever to address the crisis.”