The number of people returned to shore following irregular crossings of the Mediterranean Sea has greatly increased this year. 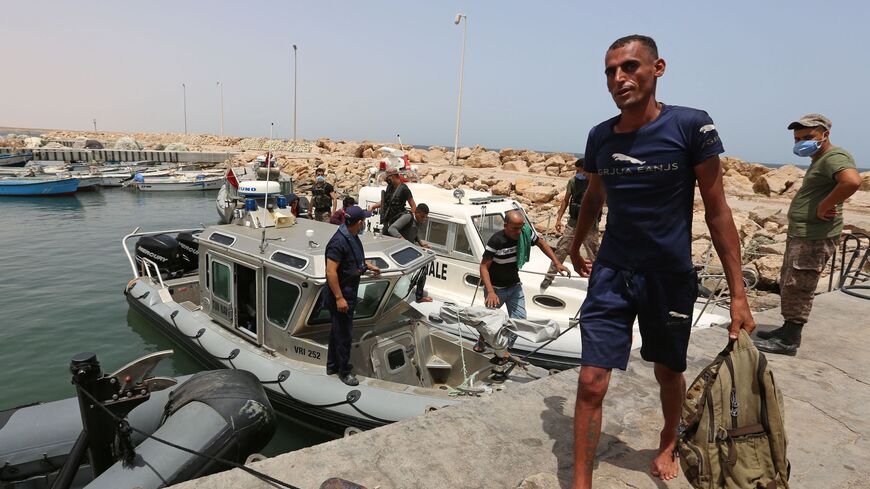 Migrants rescued by Tunisia's national guard during an attempted crossing of the Mediterranean Sea by boat arrive at the port of el-Ketef in Ben Guerdane in southern Tunisia near the border with Libya on June 27, 2021. - FATHI NASRI/AFP via Getty Images

At least 17 people seeking to cross the Mediterranean Sea have died off the coast of Tunisia and possibly hundreds more rescued.

The migrants drowned in a shipwreck off the coast of Tunisia during a sea voyage from Libya to Italy. Coast guard vessels rescued more than 160 others, the International Federation of Red Cross and Red Crescent Societies said in a tweet Thursday. The International humanitarian organization more commonly known as the Red Cross added that it provided food and medical aid to the survivors.

The tragedy occurred off the coast of the southeastern Tunisian city of Zarzis on Wednesday night. There were 185 people on board, the United Nations’ International Organization for Migration said on Facebook.

The ship’s passengers included citizens of Morocco, Egypt, Syria, Bangladesh and Ivory Coast, according to The Associated Press. The outlet reported that the number of people rescued by the Libyan and Tunisian coast guards was more than 300.

Libya is a common departure point for people seeking to illegally sail to Europe. Some of those who make the perilous journey are seeking better economic opportunities in Europe, while others are fleeing hardship and conflict in their home countries.

The trip is often dangerous. At least five people died in a shipwreck off the coast of Libya in March. More than 130 individuals were presumed dead in April when their rubber boat sank off the Libyan coast.

The Libyan coast guard regularly rescues people, but its actions have also come under scrutiny. In July, a video surfaced showing the maritime force firing warning shots dangerously close to a boat of migrants.

The number of people making cross-Mediterranean trips appears to have increased significantly in 2021. Some 16,097 people have been returned from the sea to Libya so far this year, the International Organization for Migration said in July. The same figure for all of 2020 was 11,891 people, according to the organization.