Violence against women rises in Gaza

Women are being killed at an alarming rate in the Gaza Strip, where a traditional political system still prioritizes political issues over justice and the protection of women’s lives. 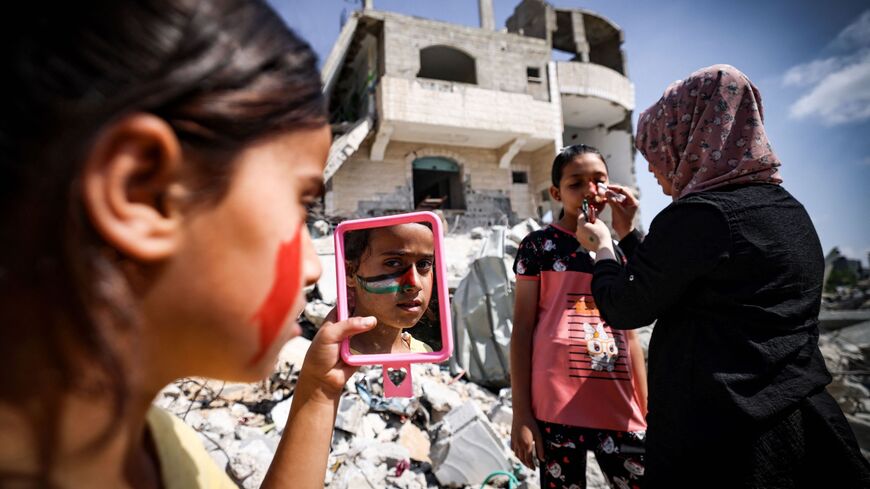 A Palestinian woman paints a national flag on the face of a child as another looks in a mirror amid the rubble of buildings destroyed by last month's Israeli bombardment of the Gaza Strip, in Beit Lahia, in the northern part of the Palestinian enclave, on June 19, 2021. - MAHMUD HAMS/AFP via Getty Images

“I have been crying for so long, feeling alone and hopeless, wondering why I do not have a brother who would hold me in his arms and make me feel safe; a brother to whom I recount the injustice, oppression and prolonged beatings with batons and sticks I have endured, as if I were not a human being. I would tell him how I have become an old soul in a young body,” wrote Istabrak Baraka, 17, her last words before she was beaten to death by her husband on June 16 in the Gaza Strip.

Baraka, who was three months pregnant, was preparing to take her high school graduation exams when her husband killed her.

The day of her death, police also announced that a woman in her 40s had been killed by her brothers in a dispute over inheritance. On May 23, police officers found the body of a 16-year-old girl buried by a side street in Jabalia, 15 days after she was reported missing. An investigation revealed that she had been killed by her father.

The data shows that the victims had diverse social statuses and were killed in many different ways. The common denominator is that they are all subjected to physical and psychological abuse.

Palestinian women live with outdated laws dating back to the Ottoman, British, Jordanian and Egyptian eras that many argue are no longer relevant in 2021. Palestine has joined several international agreements on women's rights in the past decade, including the UN Convention on the Elimination of All Forms of Discrimination against Women in 2014.

The Jordanian Personal Status Law is in force in the West Bank, and the Family Protection Law holds in the Gaza Strip. Critics say provisions of it are discriminatory against women despite amendments promoting equality. Meanwhile, the judiciary in Gaza continues to issue lighter or mitigated penalties against the abusers.

Nadia Abu Nahla, director of the Women's Affairs Technical Committee's Gaza branch, spoke to Al-Monitor about the main reasons behind the rise in the killings of women in the Palestinian territories. She said that the sexist mentality at home, in the community and in the political system is one of the main reasons behind the multiple forms of violence against women. She added that the killings of women in recent years do not amount to “honor crimes;” rather they are linked to disputes over inheritance, individual freedoms of women, or family disputes due to harsh living conditions, she said.

Abu Nahla added that the Palestinian political system, which is dominated by backward forces such as tribes, religious groups and radical factions, has failed to pass laws and adopt policies to fight violence against women.

She explained, “We, as a feminist movement, have been pressing for a law to protect families from violence for years. We prepared a draft law in this regard that was submitted to the Council of Ministers [in 2012]. The latter added amendments that did not guarantee the protection of women from gender-based violence despite our reservations and approved the draft in 2018. But the Palestinian president did not approve the law amid opposition from tribal leaders.”

“We are carrying out awareness campaigns on violence against women through legal offices in Gaza that provide psychological and social support, judicial representation and legal support.” She added that her organization received 750 complaints during the lockdown in 2020 and some 400 complaints have been submitted per month through the hotline since the beginning of this year.

Tahani Qasem, project coordinator of the Hayat Project for the Protection and Empowerment of Women and Families affiliated with the Center for Women’s Legal Research, Counseling and Protection inGaza, told Al-Monitor that the center received 500 complaints about violence against women last year and responded with psychological, social and economic support. Shelter and assistance were given in 52 cases to women whose poor economic conditions forced them to endure violence, she added.

Qasem explained that among the services the group provides are psychological, social and economic support for battered women so that they leave violent situations.

Gaza-based feminist author Hedaya Chamoun told Al-Monitor that the victims should not be reduced to numbers. Each woman who was killed has a story and her life mattered.

She said that the murder of women should become a social and moral cause not limited to women’s rights institutions, as they threaten the Palestinian social fabric that already suffers from devastating economic, political and social crises due to the Israeli occupation.