Hayat Tahrir al-Sham tries to manage the even more radical groups under its rule. 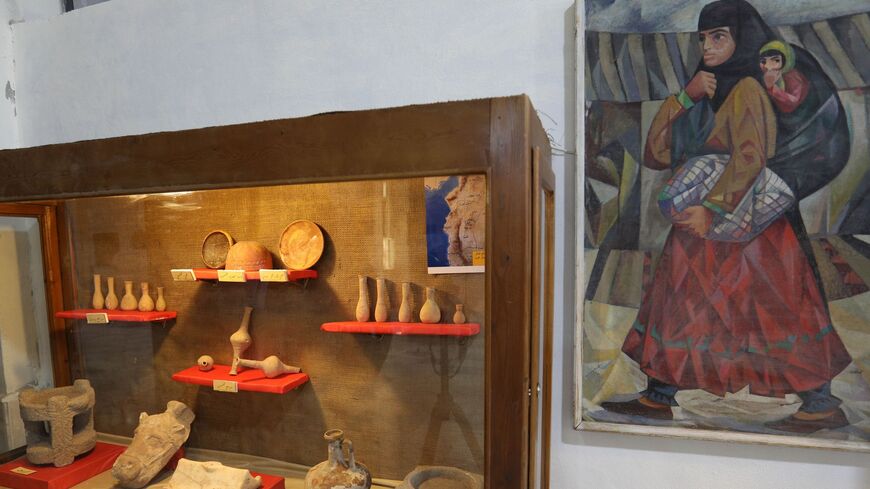 Pottery pieces are displayed at the Idlib Museum after it reopened on Aug. 13, 2018, in the northern Syrian city of Idlib. It had been closed five years. - OMAR HAJ KADOUR/AFP via Getty Images

ALEPPO, Syria — Uzbek jihadis affiliated with Hayat Tahrir al-Sham, which controls the northwestern province of Idlib, destroyed some antiquities such as statues in the Idlib Museum on June 11, claiming they were “false idols” that should not be displayed. The Islamic State previously took similar actions in areas it controlled in Syria.

A video circulated on social media that showed debris scattered in one of the museum halls that were stormed by the jihadis at night. It appears that the video was filmed by one of the jihadis, who was speaking the language of Uzbekistan.

Mahmood Talha, a journalist who is based in the Aleppo countryside and who works with Thiqa News Agency, a local opposition network, told Al-Monitor that before the Uzbek jihadis stormed the Idlib Museum, some jihadis opposing Hayat Tahrir al-Sham (HTS) posted pictures and videos of the statues in the museum. “They criticized HTS for allowing the display of idols in its areas of control in Idlib. Some jihadis affiliated with HTS, particularly the Uzbeks, were provoked by such posts and they thus stormed the museum and destroyed the ‘idol’ statues.”

Syrian opposition researcher Hosam Jazmati posted on Facebook on June 12, “Three years ago, the HTS-affiliated Syrian Salvation Government in Idlib reopened the Idlib Museum under the supervision of a number of archaeologists, and the museum became a destination for students and for a number of school visits. … A picture of children at the museum showing six or seven statues behind them provoked a number of jihadis who had defected from HTS. They denounced having idols in an area that is supposed to be governed by Islamic law, claiming that it is a move by [HTS leader Abu Mohammed] al-Golani to please the West, after his interview with [American] journalist Martin Smith.”

Jazmati added, “A group of Uzbek jihadis affiliated with HTS entered the museum [June 11] and smashed these statues. Uzbek jihadis are a cohesive group that is difficult to hold accountable. In addition, whoever did this responded to their understanding of the same principles that prompted them to emigrate and join and fight alongside HTS in the first  place.”

An official in the Salvation Government told Al-Monitor on condition of anonymity, “Special forces from HTS emptied a large part of the museum’s contents at the beginning of June, especially the statues and valuable archaeological artifacts, and moved them to a safe place. HTS had fears about radical jihadis storming the museum, which was to be expected at any moment due to the controversy caused by the anti-HTS jihadis who criticized the display of the statues and indirectly called for their destruction. When the Uzbek jihadis stormed the museum, they found few artifacts and destroyed fewer than a dozen small ones.”

He added, “The Idlib Museum is run by the Salvation Government, and it used to receive students from the history department at Idlib University and students from other departments who love to see antiquities, in addition to being a destination for school field trips.”

Issam al-Khateeb, a defected HTS member, questioned the credibility of the story of HTS-affiliated Uzbek jihadis destroying the statues. He posted on Telegram on June 12, “The Uzbeks did not destroy the statues in Idlib Museum. After some jihadis objected to their presence, Golani feared they would be destroyed, so he ordered his forces to move them. At the same time, the news about Uzbek jihadis storming the museum is just Golani’s way of showing the West that there are still some extremists within his ranks but he is working on restraining them.”

The Idlib Museum is considered one of the most important museums in Syria. It was opened in 1987 and contains a great heritage dating to the 3rd millennium B.C. until the Islamic Golden Age, excavated from dozens of important archaeological sites, most notably Ebla, Tall Mastumah, Afes and Saraqib. The museum includes large galleries distributed over three floors, where artifacts are displayed according to their historical sequence, in addition to a special section for the province’s folklore.

In August 2018, the Idlib Museum reopened its doors to visitors after being closed for many years amid the Syrian war. Specialists from the Idlib Antiquities Center and under the supervision of the Salvation Government took over the management of the museum in late 2017 and worked to restore it.

The historical monuments of Idlib have been subjected to vandalism and destruction during the war. Several historical monuments were destroyed in the areas of clashes between the Syrian government forces and the opposition, and a large number of antiquities were stolen during the conflict. Several archaeological sites in Idlib were turned into safe havens for displaced Syrians who took refuge there.

Meanwhile, the Syrian Network for Human Rights issued a statement June 12 condemning that HTS-affiliated Uzbek jihadis destroyed seven sculptures inside the Idlib Museum. The network further called on the international community to revive the stalled peace operation in order to preserve what is left of the Syrian people and state.