In Kyrgyzstan, a Turkish educator missing since May 31 has rights groups warning of another illegal rendition by the Turkish government. 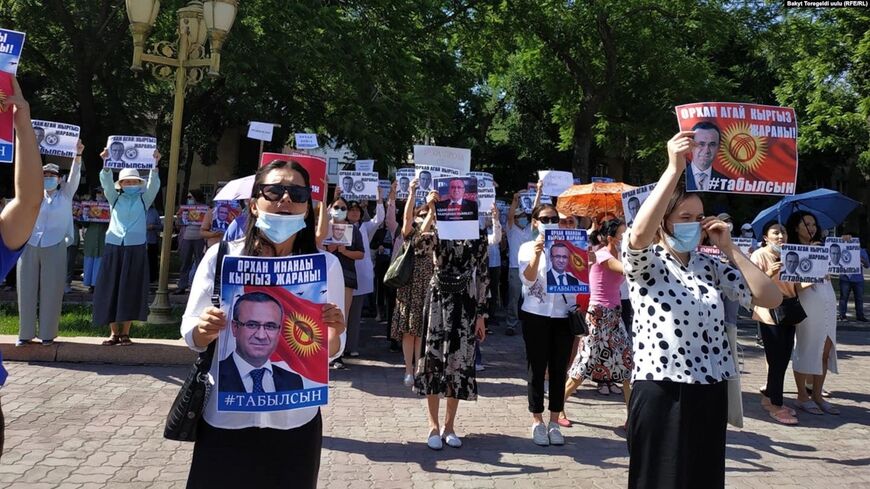 Protesters in the Kyrgyz capital Bishkek hold signs demanding to know what happened to dual Turkish-Kyrgz citizen Orhand Inandi, who has been missing since May 31. - Amnesty Interational

Turkey’s aggressive campaign of illegally rendering its opponents from foreign countries is in the spotlight again, this time in the Central Asian republic of Kyrgyzstan, where a Turkish educator has been missing since May 31. Rights groups are urging Kyrgyz authorities to investigate the disappearance of Orhan Inandi, the founder of an education network associated with Fethullah Gulen, the Pennsylvania-based Sunni imam blamed by the Turkish government for the failed 2016 attempt to bloodily overthrow President Recep Tayyip Erdogan.

Human Rights Watch said that Inandi may be forcibly deported to Turkey, where he runs the risk of being tortured and jailed, a pattern that has been repeated for scores of alleged Gulenists who have been kidnapped worldwide from Kosovo to Kenya by Turkish intelligence operatives and held at black sites for prolonged periods before surfacing in jail.

Freedom House asserted in a January report that Turkey has carried out such renditions in at least 31 different countries.

Turkey’s most recent prize is Gulen’s nephew Selahaddin, who disappeared from a police station in the Kenyan capital Nairobi last month. A local court had ruled against his extradition. A few days later his photos were splashed across pro-government newspapers showing him handcuffed and posing between two giant Turkish flags.

Inandi’s wife believes her husband is likely being held at the Turkish Embassy in the Kyrgyz capital Bishkek. “That is what I was told by several sources who spoke to people who said they saw Orhan there,” Reyhan Inandi told Al-Monitor in a telephone interview from Bishkek today. She acknowledged, however, that she had no concrete evidence to that effect. “It’s been 10 days and I still have no idea where my husband is. My four children and I can no longer live in our home out of fear. We are receiving eerie anonymous phone calls. The situation is intolerable,” she said.

The Turkish Embassy in Bishkek has denied the claim.

Inandi, 53, a dual Turkish-Kyrgyz national, has worked in Kyrgyzstan since September 1995. The Gulen movement has a network of 16 high schools, nine primary schools, a university and several college prep schools in the country. “The current Kyrgyz president’s late son went to our schools, his brothers’ kids go to our schools, half of Kyrgyz parliamentary deputies’ children go to our schools. We are trusted and well respected here,” the missing educator’s wife said.

Since 2015, Ankara has been leaning on Kyrgyz authorities to shutter the Gulen-run schools. Many of Turkey’s allies, among them Pakistan, Somalia and Azerbaijan, have done just that and deported their staff. But Kyrgyzstan has resisted such pressure so far.

The country’s new president, Sadyr Japarov, who met with Erdogan in Ankara yesterday, has told the Interior Ministry to step up the search for Inandi. Bishkek police have created a special investigative team to locate him. The UN Convention on Torture prohibits the extradition of individuals to countries where they are likely to face ill treatment.

It’s unclear whether Inandi’s fate was raised during Japarov’s visit. Speaking at a joint news conference with the Kyrgyz leader, Erdogan confirmed that the issue of “FETO” — the acronym used by Turkey labeling the Gulenists as terrorists — had come up. “Recent political problems have exposed the dark, bloody and unpleasant face of FETO. God willing, we will overcome this together, supporting each other. I once again assured the distinguished president that Turkey supports the Kyrgyz people and the country’s authorities. We are next to Kyrgyzstan at every step toward political stability,” he said.

Japarov, who is alleged to have connections to organized crime, came to power after being broken out of prison in a revolution in October.

“There is often collusion if not always between Turkey and local authorities in such cases, with local security forces involved in the abductions and detentions of such individuals. The first time they ever see a Turk — after months in custody — is on a plane as they are being transferred back to Turkey,” Schenkkan observed. The private planes are usually rented by Turkey’s national intelligence service, MIT, though on some occasions they are flown back on Turkish Airlines, the national carrier, Schenkkan added. However, if Inandi is being held at the Turkish mission, “that would be unprecedented, a first.”

Inandi was last seen on May 31 in Bishkek. His car was found abandoned the next day with valuable items such as his mobile phone left untouched, reinforcing suspicions that he was snatched. Daily protests are being held outside the Turkish Embassy in the Kyrgyz capital with demonstrators bearing photos of Inandi reading, “Where is Inandi?”

Turkey is facing international censure over the abductions. In October, the UN’s Human Rights Council noted in a report that it was “gravely concerned at what appears to be a systematic practice of State-sponsored extraterritorial abductions and forced returns of Turkish nationals from numerous States to Turkey.” It said, “To date, at least 100 individuals suspected of the Gulen/Hizmet movement are reported to have been subjected to arbitrary arrests and detentions, enforced disappearance and torture, as part of covert operations reportedly organized or abetted by the Government of Turkey in coordination with authorities of several States.”

The European Court of Human Rights and the European Parliament have also condemned Turkey’s actions, to little effect. Schenkkan said of the United States, “I am sure that they are engaged with the issue from behind the scenes.”

Several Gulen-linked individuals remain missing within Turkey proper. Yusuf Bilge Tunc has been missing since August 2019. Huseyin Galip Kucukozyigit, who like Tunc was among tens of thousands of alleged Gulenists purged from the government, has been missing since Dec. 29 last year. His daughter, Nursena, has mounted a social media campaign to raise awareness of his plight with the hashtag "where is Huseyin Galip Kucukozyigit?"

Despite her repeated appeals, she says Turkish authorities have yet to conduct a proper investigation into his disappearance.

Inandi’s wife said, “I often thought to myself, ‘What if this happens to us too?’ but Orhan never thought it was possible. Today is my birthday. We should have been celebrating together as a family.” She broke down in tears and hung up.