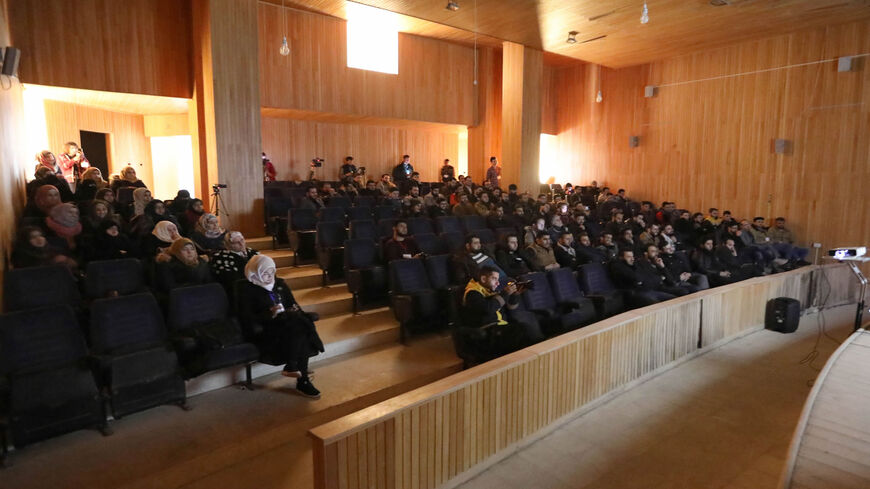 Syrians attend the screening of the Oscar-nominated film "Last Men in Aleppo" at the University of Idlib in the rebel-held province of Idlib, Syria, Feb. 12, 2018. - Omar Haj Kadour/AFP via Getty Images

The university’s administration said in a circular that was widely available on social media June 10 that the creation of social media rooms for mixed-gender students including on Facebook, WhatsApp and Telegram, is strictly forbidden.

The statement, signed by Idlib University head Ahmed Abu Hajar, stated that single-gender rooms should be open under the supervision and following the approval of the university’s head and student council.

It also warned that violators will be held accountable in accordance with the regulations and laws in force, and that the group administration shall be responsible for what is being posted on social media.

The decision ignited ire and uproar among Syrian opposition social media activists who demanded that the university annuls it. They denounced the decision as a violation of public freedoms and a restriction on women that would cause confusion among students.

The decision was also widely condemned by the university students and civil communities in Idlib province, with the majority of students and student groups describing it as a blatant interference in students’ affairs.

Al-Monitor contacted officials at the Idlib University media office, but they refused to comment on the reasons behind the decision. They claimed the circular is an unofficial and nonbinding decision, and that it targets the student bodies and the faculties’ social media groups administrators, stressing that the decision has not been officially issued.

The officials added that this decision is only related to the university's social media rooms and its administrative bodies, and that there is no interference in the students’ affairs.

Speaking to Al-Monitor, Idlib University student Reham Moussa, 20, said, “It is a funny decision to ban mixed-gender rooms on virtual sites. These consist of virtual sites and meetings. This decision cannot be implemented on the ground. Every male and female student has a social media account and they can communicate, chat and open groups freely."

She said, "The decision seeks to restrict the students’ freedom and prevent them from communicating with each other, which in itself is a dangerous move. It shows that the university is against the students’ rights, even the most basic ones, which is the right to share opinions and ideas. It also shows that there is a fundamentalist mentality running the university, not an academic one. There is no place for fundamentalism in the information age where openness prevails. They can't stop ideas from being shared.”

Khaled Saleh, a 22-year-old student at Idlib University, told Al-Monitor, “The university’s decisions do not serve the students’ interests. Students should have a voice, and their views should be taken into account. This decision harms the university as it portrays it as a religious institute. In this information age, it is easy to access information and ideas that the university is banning or fears. Unfortunately, the university only cares about the financial fees the students pay.”

Omar Mohammed, a 24-year-old Idlib University student residing in Idlib, told Al-Monitor, “This decision restricts the students’ freedom and meddles in their affairs, which is unacceptable. The rooms that we as students open on social media are necessary for us to communicate about academic-related matters, lessons and lectures. Students use these rooms to explain, ask and answer each other's lessons-related matters. They do not consist of chat rooms and are not a waste of time as the university’s administration wants to portray.”

Al-Monitor spoke to Ghasq Ali, a women’s rights activist living in Idlib. She said, “The students will continue to create online rooms where they can communicate with each other. This unfair and wrong decision will not be implemented. All these decisions violate the students’ freedoms and rights — be they male or female — and are issued as part of the patriarchal framework that fights women’s rights. None of these restrictions will work. Women in Idlib are strong and obtain their rights by resisting all these measures.”

She said, “There is a political goal behind this decision. It is designed to divide the students so as to monopolize decision-making without any resistance from their side. HTS has nothing to do with this decision that was made by the university administration. Some critics, however, found an opportunity to vilify Hayat Tahrir al-Sham so as to settle political scores.”

Ali added, “The Syrian regime’s media outlets have even circulated the news regarding this decision to tell the world that the Syrian opposition consists of extremist groups. This decision serves the Syrian regime’s propaganda. But the reality is different from what the Syrian regime wants to show. Despite everything the opposition-held areas have been going through, we can say that freedoms are relatively more [respected] than those in regime-held areas, and the proof is that we can protest against the Salvation Government’s decision and criticize Hayat Tahrir al-Sham and its actions."

She concluded, "The regime wants to show that we live under a dictatorial opposition, which is untrue. Despite all difficulties, women in Idlib were able to get jobs in education and relief organizations. They pursue their university studies in large numbers, and establish women’s rights associations, because Syrian women are strong and determined and able to defy all the conditions engendered by the war.”