Hayat Tahrir al-Sham, which controls Syria’s Idlib province, is using women’s organizations and institutes to tighten its grip on civil society and expand its public base, despite its multiple violations against women. 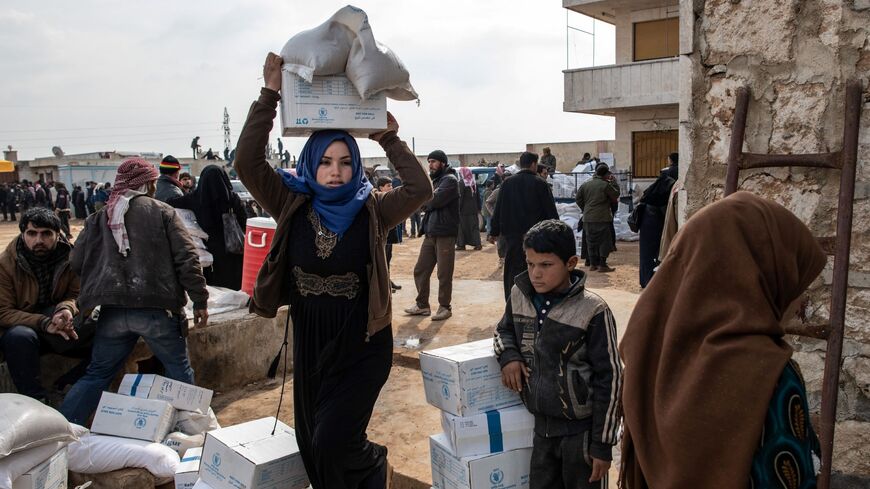 A displaced Syrian woman carries a box of humanitarian aid supplied by an NGO on Feb. 19, 2020 in Idlib, Syria. - Burak Kara/Getty Images

Hayat Tahrir al-Sham is working to extend its influence on civil society in Syria’s northwestern province of Idlib, seeking to get rid of the jihadist character of its administrative and executive institutions.

As part of these efforts, HTS is highlighting women’s role in society through its Women’s Preaching Office, which regulates the work of female preachers and oversees their activities at mosques and in the streets in Idlib and its environs.

The Women’s Preaching Office has recently increased its activities. Through this support, HTS is seeking to raise a new generation of female preachers that can get its ideological message to every person in the areas under its control. This shows that HTS is aware of the role women can play in expanding the group’s popular base and influencing society.

“The office organizes cultural events and campaigns that target female youth and encourage them to become preachers," Umm Hafs, an official at the Women’s Preaching Office, told Al-Monitor. "It also offers almost daily religious courses and preaching training for women. These activities cover most of the [displaced] camps.”

The office provided 352 lectures in one month, given by 120 female preachers in 74 mosques, while the number of women’s preaching forums reached 16. She added, "We also have an affiliated intermediate institute dedicated for women only, which is one of the largest Sharia institutes in Idlib. This institute offers free education for two years.”

However, a woman from Idlib who refused to reveal her identity or job told Al-Monitor, “HTS exploits the ignorance and lack of awareness of some Syrian women to ingrain its ideas in society. HTS’ work with female organizations brings back to mind Al-Qubaysiat organization," which the Syrian regime used to teach women about the Quran in past years.

She added, “HTS is working through these female organizations to spread its ideologies in society in a less radical manner, given the influence women can have on men and society.”

Abbas Sharifa, a researcher in jihadist groups at the Jusoor Center for Studies, told Al-Monitor, “HTS now considers itself part of the local community, and it wants to move from the stage of managing the community to controlling it.”

It wants to use the Women’s Preaching Office to communicate its ideas and influence families, Sharifa added, "but the work of the office is limited to the educational process and giving lectures and lessons in mosques. So far, it has not been impactful on society.”

“Over the past years, HTS has committed many violations against women in the areas under its control," Fadel Abdul Ghany, director of the Syrian Network for Human Rights, told Al-Monitor. But HTS leader Abu Mohammed al-Golani has been recently seeking openness, with the aim to get HTS into the political process, entering the Syrian parliament and gaining Western recognition. "Some female preachers in the office no longer even wear the niqab, as it does not go with modern Syrian society,"  Abdul Ghany said. "However, this does not mean that HTS has become an advocate of women’s freedom, as violations against them persist.”

Abdul Ghany added, “HTS must grant women all their rights, such as freedom of work, movement and clothing, which fall under personal freedoms. The Women's Patrols Office affiliated with HTS’ Al-Falah security apparatus has the authority to arrest those violating the Sharia. It also bans mixing of men and women in public places, men selling women's clothing, and clothing stores that have mannequins displaying clothes. … So it seems HTS is only doing a media campaign.”