The United States is threatening to "deter" Iran's apparent effort to deliver weapons to Venezuela. 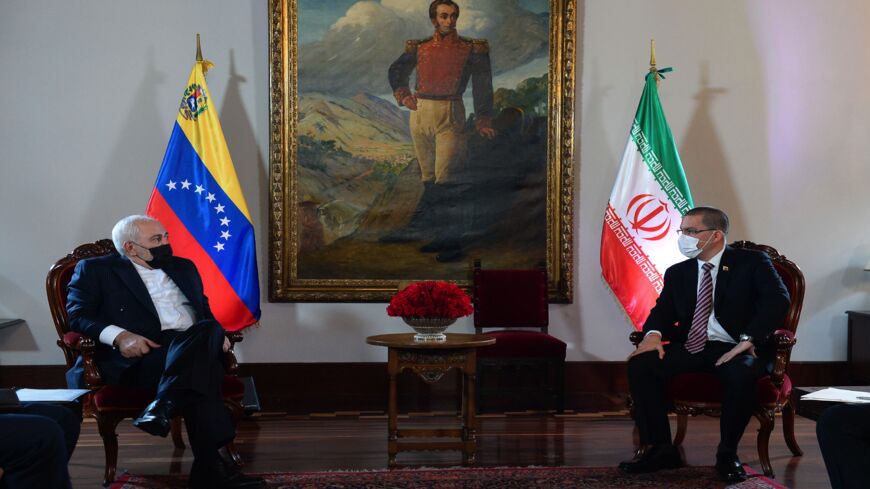 The Biden administration has issued a stern warning to Tehran following a news report that an Iranian navy vessel may be headed to Venezuela to deliver military hardware.

The admonishment, perhaps the strongest directed at Iran to date by the Biden administration, came in response to a report by USNI News revealing satellite imagery that showed the Iranian navy’s floating sea base, the Makran, carrying at least seven fast-attack boats onboard.

It remains unclear whether additional military hardware is onboard or what the final destination is. The Pentagon’s statement, attributed to press secretary John Kirby, follows an identical one provided to Politico by the National Security Council earlier on Wednesday.

Politico first reported over the weekend that the Makran was headed south along Africa’s east coast, possibly destined for Venezuela, citing three US officials. The ship and an accompanying vessel are expected to enter the southern Atlantic as early as today.

Iran has had close ties with Venezuela’s government for years, but the apparent move is the first test of its kind for President Joe Biden, whose administration seeks rapprochement with Tehran after years of tense hostilities under former President Donald Trump.

“This is a situation that the current administration inherited,” the Pentagon statement said Wednesday, adding that US officials “are now working to forestall [it] through diplomacy and other means.”

Al-Monitor has reached out to US Southern Command for comment.

The Biden administration’s response came after Iran’s Foreign Ministry spokesperson, Saeed Khatibzadeh, warned the United States to “be careful” in dealing with the Makran.

“Those who sit in glass houses should be careful,” he said.

Last year the Trump administration worked with authorities in Cape Verde to seize a multimillion-dollar shipment of Iranian fuel onboard four tankers headed to Venezuela in violation of US economic sanctions.

The Trump administration pursued “maximum pressure” campaigns against both Iran and the Venezuelan government of President Nicolas Maduro, failing to unseat the latter in a botched coup attempt in 2019.

The Biden administration has taken a less aggressive stance toward the two governments, approaching indirect negotiations with Iran over its nuclear program and offering humanitarian aid to economically ruined Venezuela.

But the current administration maintains sanctions on both governments and has so far refused to negotiate with Maduro’s regime, insisting it first engage with opposition leader Juan Guiado, whom the United States and its allies recognize as Venezuela’s rightful president.

A shipment of Iranian military hardware to Venezuela risks throwing a wrench into the international nuclear negotiations in Vienna and may spoil any chance of direct negotiations between the Biden administration and Maduro’s government in the near term, despite calls from Democrats in Congress for diplomatic initiative on both fronts.

It is also likely to raise tensions in the Persian Gulf, where Iran has targeted commercial vessels in the past in retaliation for cargo seizures and incidents of Israeli sabotage against Iranian tankers. Iranian navy fast-attack boats have twice harassed US Navy and Coast Guard vessels in the Gulf in recent months amid talks in Vienna.

The Trump administration’s maximum pressure campaign drove US adversaries such as Iran to double down in support of Maduro's government, which has provided gold in exchange for Iranian petroleum.

Since the failed coup attempt, Iran has also increased its weapons shipments to Caracas, a top US military commander said in December.

Adm. Craig Faller, head of all US forces in Latin and South America, called the presence of Islamic Revolutionary Guard Corps’ personnel from the expeditionary Quds Force in Venezuela “alarming and concerning” late last year.

Russia also sent roughly 100 military personnel to Venezuela in 2019, likely to advise on deployment of its decade-old S-300 air defense systems, a US official said at the time.