An official from an Iran-backed militia in Iraq accused the Kurdistan Regional Government of allowing the United States to launch bombing runs from Erbil. 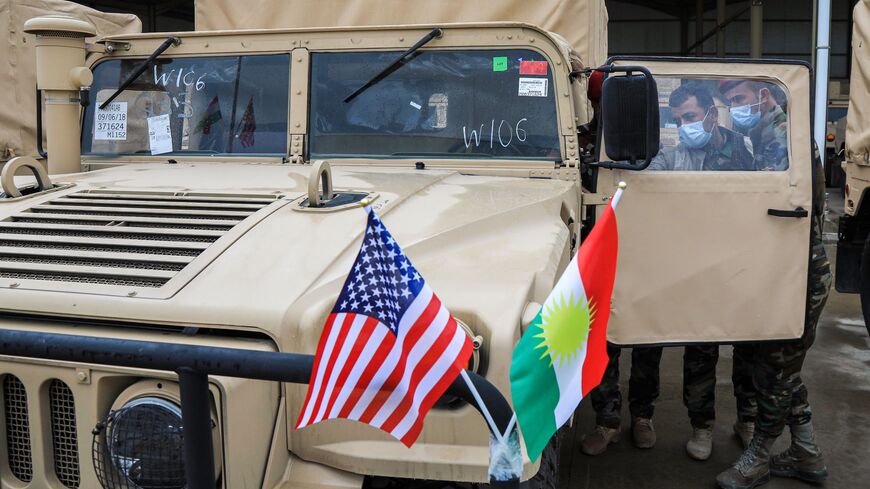 Members of the Iraqi-Kurdish Peshmerga forces inspect a humvee during a handover and US military and logistic assistance distribution ceremony to the Peshmerga Ministry of the Kurdistan Regional Government (KRG) in the Erbil the capital of the autonomous Kurdish region in northern Iraq, on Nov. 10, 2020. - SAFIN HAMED/AFP via Getty Images

The Kurdistan Regional Government of Iraq has denied claims that US warplanes took off from its capital Erbil to bomb Iran-backed militias in the country.

Early Monday morning, US fighter jets bombed Kataib Hezbollah and Kataib Sayyid al-Shuhada positions on the western Iraq-eastern Syria border. Both groups are Iraqi militias that receive support from Iran. The groups and allied “resistance” militias have been in conflict with the US military for more than a year, and seek to expel US forces from Iraq. The latest US airstrikes led to an attack on US positions in Syria Monday night.

An official from Kataib Sayyid al-Shuhada, Ahmed al-Maksusi, claimed on Monday that the US jets that launched the airstrikes took off from Erbil. The US military has a presence at the Erbil International Airport as part of its participation in the global coalition against the Islamic State. The United States also has troops in Baghdad and at Ain Al Asad airbase in western Iraq.

“From where did this bomb come from? The Erbil base,” said Maksusi during an interview with the Iraqi TV station iNEWS.

The KRG denied the claim in a press release on Wednesday.

“We deny such baseless accusations,” said spokesman Jotiar Adil, referencing Maksusi by name. Adil also accused Maksusi of creating a “excuse for targeting Erbil.” The city has been the site of militia rocket fire targeting the US presence on several occasions.

“They’re all Iraqis, but when there are obligations, they’re nowhere to be found,” he said of people in Erbil. “The planes take off and bomb Iraqis and we defend you all in Erbil and they know we defend them.”

The militia official referred to US forces as “occupiers” and then criticized KDP leader Massoud Barzani.

“Where you at, Massoud Barzani? Right now, Iraqis protect you and your land and your possessions,” said Maksusi. “Don’t denounce.”

The KRG has historically had difficult relations with Iran-backed militias in the country, including those in the Popular Mobilization Units (PMU). Shortly after the PMU and the KRG’s Peshmerga forces helped defeat the Islamic State in 2017, the PMU participated in the battle of Kirkuk, which ended KRG control of the city and led to the return of federal authority. The militia’s rocket strikes from Erbil have further damaged relations.