The US news outlet Politico reported that two Iranian naval vessels may be heading to Venezuela, a close ally of Iran also sanctioned by the United States. 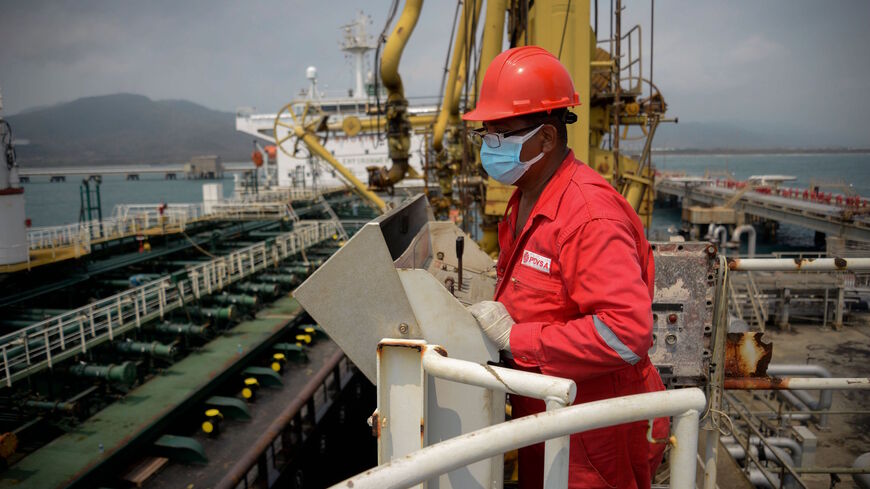 A worker for the Venezuelan state oil company PDVSA looks at the Iranian-flagged oil tanker Fortune as it docks at the El Palito refinery in Puerto Cabello in the northern state of Carabobo, Venezuela, on May 25, 2020. - AFP via Getty Images

Iran’s Foreign Ministry warned against “miscalculations” following a report that Iran may have sent warships to Venezuela.

On Saturday, the Washington-based news outlet Politico reported that the US national security community is monitoring two Iranian naval vessels that “may” be heading to Venezuela, citing unnamed officials. The ships consist of an Iranian frigate and the Makran, which is a former oil tanker, according to the outlet.

The shipping traffic website MarineTraffic showed that a ship named “Makran 2” was in the Iranian port city of Chabahar on Friday. Politico reported that the two vessels were sailing south along the east coast of Africa.

Iranian Foreign Ministry spokesman Saeed Khatibzadeh addressed the report on Monday, but did not confirm the information. He instead warned against inhibiting Iran’s maritime movement in international waters, according to the semi-official Tasnim News Agency.

“Iran has constant presence in international waters is entitled to this right on the basis of international law,” he said. “I warn that nobody should make a miscalculation. Those who live in glass houses must be cautious.”

Iran and Venezuela are both subject to extensive US sanctions, including on their energy industries. This shared animosity with the United States has led the Islamic and Bolivarian republics to develop close economic and political relations. Iran delivered fuel to Venezuela several times in 2020 despite US diplomatic pressure. Some of the Venezuela-bound Iranian tankers likewise sailed around the African continent. In December, the Pentagon said Iran had sent weapons and security operatives to Venezuela.