Iranian officials rushed to reject speculation of sabotage behind a Tehran refinery blaze that followed a chain of incidents blamed on Israel. 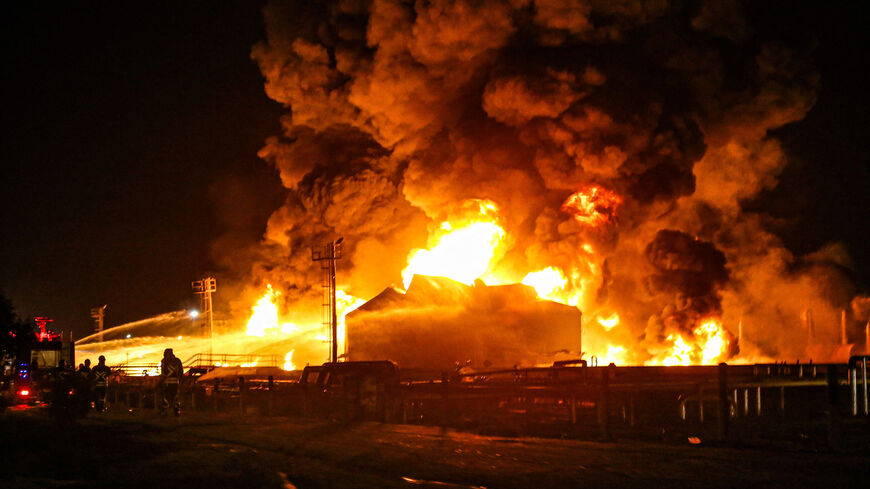 A picture taken late on June 2, 2021, shows Iranian firefighters trying to extinguish a fire at an oil refinery in the Iranian capital Tehran. - VAHID AHMADI/TASNIM NEWS/AFP via Getty Images

Only hours into a massive fire that ravaged the Tondguyan Oil Refinery south of the capital Tehran, one Iranian official after another dismissed speculation that it was an act of sabotage.

The refinery's public relations chief told the Iranian press that based on a review of surveillance camera footage, the sabotage theory was "absolutely ruled out." A prosecutor announced that the incident was not being treated as sabotage, but an investigation had been launched into the possible causes.

Based on their initial estimates, officials were expecting the fire to be out in 12 hours. Yet by mid-day June 3, plumes of smoke were still being seen outside the refinery as the fire had hit a large reservoir of 20,000 barrels of oil.

Later on Thursday afternoon, however, Tehran's Firefighting Department and an Oil Ministry deputy said the flames were entirely extinguished and a spread to the refinery's main containers was no longer a threat.

Oil Minister Bijan Zangeneh appeared before cameras at the site of the fire overnight. He attempted to allay concerns, promising that the refinery will resume its normal operations on Thursday. Zangeneh added that no disruption had been caused to the overall production and dismissed reports about a looming shortage of gasoline in the wake of the blaze.

Despite such assurances, the fire triggered panic buying, with long queues of motorists at some gas stations in the capital.

The refinery blaze occurred only a few hours after the Iranian navy's biggest vessel, an aging logistics ship, caught fire and sank off the country's southern port of Jask. The incident left no casualties as the crew were evacuated in time. The occurrence of the two blazes in one day only added to suspicions of sabotage. Iran has suffered various such setbacks over the past few months, from power plants and petrochemical centers to vessels navigating international waters.

But the attack with the biggest repercussions targeted the country's key Natanz nuclear enrichment facility, where Iranian officials acknowledged significant damage and noted hallmarks of Israeli involvement. Their Israeli counterparts have not confirmed nor denied any role.

The latest two incidents also coincided with some reported advance and cautious confidence about positive outcomes from indirect talks in Vienna between Iran and the United States over the revival of the Iran nuclear deal, which Israel has repeatedly characterized as a "bad deal" and a "threat" to its security.