Iran appears to be planning to launch a Simorgh satellite that the Islamic Republic may have failed to get off the ground earlier this month. 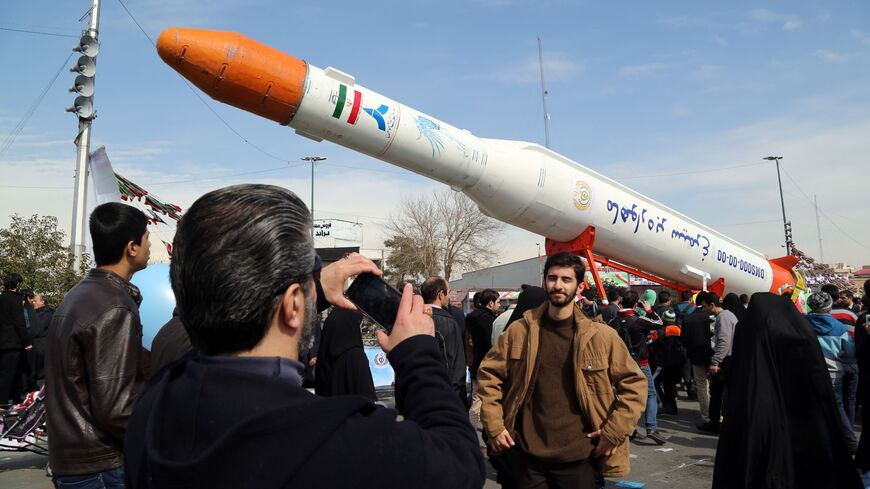 Iranians take pictures of the Simorgh (Phoenix) satellite rocket during celebrations in Tehran to mark the 37th anniversary of the Islamic revolution on Feb. 11, 2016. - ATTA KENARE/AFP via Getty Images

Iran appears to have failed to launch a rocket meant to carry a satellite into orbit, according to satellite imagery and a report citing US officials.

Imagery collected by Planet Labs and Maxar show what appeared to be launch preparations June 6 at the Imam Khomeini Spaceport in north-central Iran.

The images also appear to show that a second attempt may be in the works: A mobile platform and fuel cells were spotted in imagery taken June 20, according to CNN, which first reported the attempt, citing multiple defense officials.

Lt. Col. Uriah Orland, a Pentagon spokesman, told CNN that the Defense Department was aware of the failed launch, which he said occurred “early on June 12.” It remains unclear why the launch failed.

Jeffrey Lewis, an arms control specialist at the Middlebury Institute of International Studies at Monterey, told CNN that the rocket appeared to be a Simorgh, which is based on a North Korean design.

At least three prior Simorgh launches by Iran have failed since 2017, but this month's is the first to have reportedly failed prior to liftoff. A test launch carrying no payload in April 2016 reportedly succeeded. Iran, Lewis noted to CNN, has had more success with other models.

US Space Force commander Gen. John Raymond dismissed the Noor-1 at the time as a “tumbling webcam in space; unlikely providing intel.”

Still, US officials have expressed concern about Iran’s military space program, which experts say could be used as a path to developing intercontinental ballistic missiles. The Trump administration sanctioned the Iranian Space Agency in 2019 after another rocket exploded at the Imam Khomeini Spaceport, calling the space agency a "cover" for Iran's ballistic missile program.

News of the latest failed launch comes two weeks after The Washington Post reported that Russia is preparing to provide Iran with a Kanopus-V satellite equipped with a high-resolution camera that would greatly improve the Iranian military’s surveillance capabilities of earth’s surface.

While the Kanopus-V could provide Iran’s Islamic Revolutionary Guard Corps with 1.2-meter resolution images of US bases and outposts in the region, the head of US forces in the Middle East, Gen. Kenneth “Frank” McKenzie, dismissed the project as “not particularly concerning.”

The attempted launch also comes as the United States and Iran draw closer to a comprehensive deal to limit Tehran’s nuclear program in exchange for relief from US sanctions which were reimposed during the Trump administration over Iran’s activities in the region.

Iran has unveiled new ballistic and cruise missiles since the 2015 nuclear deal. US officials have accused Tehran of passing such technology to proxy militias in the region.

After the Trump administration abandoned the 2015 agreement, Iran began publicly announcing gradual increases in its uranium enrichment in violation of the deal.

Iran’s hard-line President-elect Ebrahim Raisi said this week that his government would not negotiate with the Biden administration over Tehran’s ballistic missile program and regional influence campaign.

Raisi, however, has shown no sign yet of significantly changing Iran’s foreign policy toward the United States with regard to the nuclear negotiations.