Russia is set to give Iran a satellite that could spy on Tehran's potential military targets. 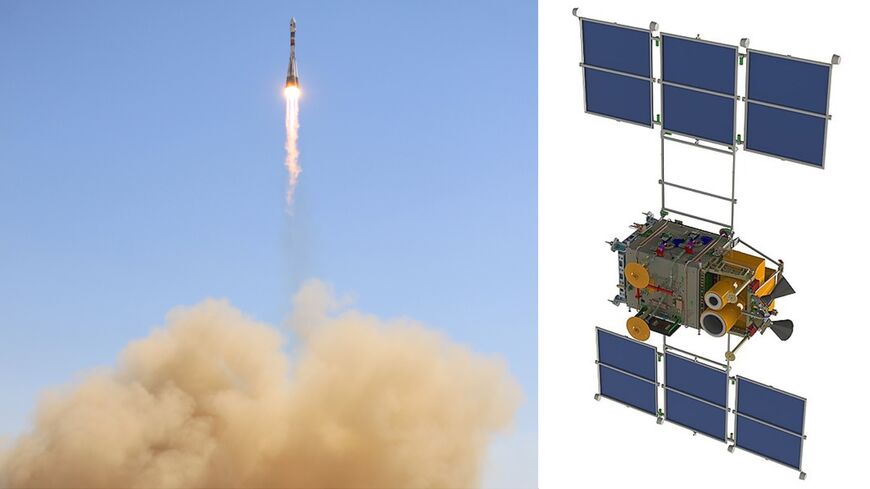 At left, a Russian Soyuz FG cargo rocket blasts off from a Russian-leased Kazakh Baikonur cosmodrome on July 22, 2012 with Russian Kanopus-V and MKA-FKI, Belarussian BKA, German TET-1 and Canadian ADS-1B satellites. A model of the Kanopus-V satellite, which Iran is reportedly acquiring from Russia, is seen at right. - ALEXANDER NEMENOV/AFP/GettyImages / El Salvador/Wikimedia

Russia has plans to provide Iran with a civilian-grade satellite system that would significantly improve the Iranian military’s ability to surveil potential targets around the world.

The Kanopus-V satellite will include a camera capable of a resolution of 1.2 meters, which could allow Iran to closely monitor military bases and oil infrastructure in the Persian Gulf, Iraq and Israel, at a time when Iranian proxies continue to target or threaten such sites. The resolution is much better than what Iran currently has, but lower than that of US satellites.

The proposed transfer was reported by The Washington Post, citing a current US official and a former US official as well as a Middle Eastern government official briefed on the subject.

Iran’s new satellite could be launched from Russia, possibly within a few months, according to the Post. Iran last year put a military satellite into orbit successfully for the first time.

Russia and Iran have expressed interest in partnering on space programs for years. That the expiration of the UN’s arms embargo on Iran last year could bring the two closer in defense ties has also raised some concern among US officials, though the Kanopus-V would not likely violate the embargo.

It is not yet clear which Russian firms will help Iran launch, operate and maintain the satellite. Islamic Revolutionary Guard Corps officials have made multiple trips to Russia since 2018 over the agreement, the Post reported.

Russian specialists have also traveled to Iran in recent months, likely to assist Iranian personnel who would operate the satellite from a new facility near the city of Karaj in Iran’s south, the paper said.

The report comes as the United States is engaged in indirect negotiations with Iran over a mutual return to the 2015 agreement that placed strict limits on Tehran’s nuclear program. President Joe Biden is also scheduled to meet with Russian President Vladimir Putin in Geneva next week.

Top Israeli officials have warned against a return to the Iran nuclear deal, saying it could embolden Iran, which has supplied weapons technology to proxy militias in Iraq, Syria and Yemen. Those militias have launched hundreds of attacks against Saudi Arabia as part of Yemen’s civil war and against Western coalition forces stationed in Iraq.

The Kanopus-V could give Iran detailed imagery of sites that some officials worry could be passed on to proxy fighters.

The Biden administration is leading a diplomatic push to end Yemen’s civil war and is in intermittent talks with Baghdad about removing at least some of the last remaining US troops from Iraq country, according to Iraq’s government.