Relations between Egypt and Pakistan have grown stronger as both countries seek to restrict the Muslim Brotherhood and parties supporting the group as well as fight extremism in Pakistan. 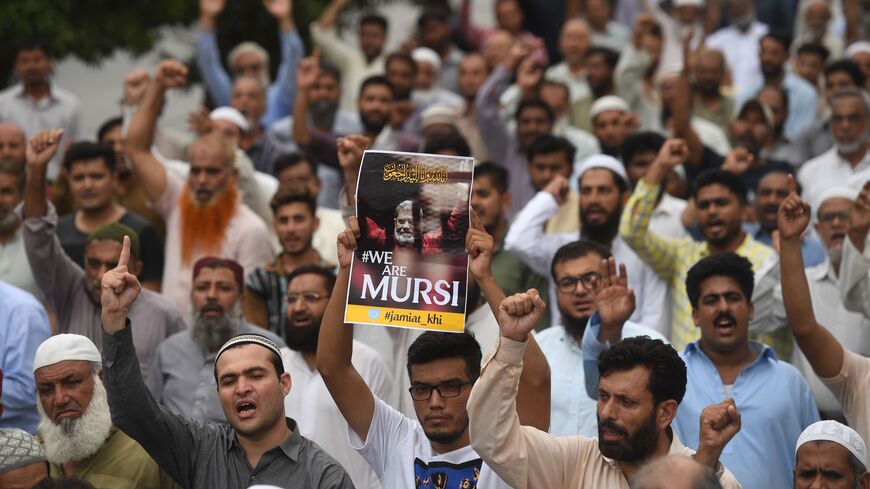 Egypt has been making overtures to Pakistan in a bid to increase its influence there and curtail the power of the Muslim Brotherhood and other Islamist groups in Islamabad.

In a June 13 meeting in Cairo with Lt. Gen. Nadeem Raza, chairman of the joint chiefs of staff of the Pakistan Armed Forces, Egyptian President Abdel Fattah al-Sisi stressed that he was looking forward to developing bilateral cooperation with Pakistan in combatting terrorism and extremism.

Al-Azhar has a training program for imams from abroad, including from Pakistan. Egyptian imams also travel to Pakistan to give training courses for imams there.  On June 14, Raza called on Al-Azhar Grand Imam Ahmed al-Tayeb to send imams and preachers to Islamabad to raise awareness among the Pakistani army on extremist ideologies.

Tayeb responded, “The imam training program continuously receives imams from Pakistan. We will intensify these courses to support Pakistan in confronting extremist ideas.”

Egypt is working to avoid a repeat of the crisis that erupted between Cairo and Islamabad in May 2015, when the Egyptian Foreign Ministry summoned the charge d’affairs of Pakistan’s embassy in Cairo after the Pakistani Foreign Ministry issued a statement condemning Egypt's decision to execute 156 Brotherhood members.

Egyptian news outlets supporting the government accused the Muslim Brotherhood of trying to sabotage relations between Pakistan and Egypt and blamed Islamist parties for being behind the tension between the two countries.

During the rule of former Egyptian President Mohammed Morsi, the Muslim Brotherhood worked to consolidate its ties with Pakistan. In March 2013, Morsi visited Pakistan, the first visit by an Egyptian president since the 1960s under President Gamal Abdel Nasser.

On May 26, the Egyptian and Pakistani air defense forces carried out joint military training for the first time in Egypt.

The two officials also discussed cooperation between 81 Egyptian military factories and Pakistani military production on joint manufacturing and exchange of manufacturing technologies, including anti-tank mines and other explosives.

Egypt is also trying to get into the weapons market in Pakistan. In 2019, Pakistan was reported to be seeking to acquire Mirage V fighter jets from Egypt.

During a meeting with Qureshi in Cairo in February, Alaa Ezz, the secretary-general of the Federation of Egyptian Chambers of Commerce, said, “There have been serious discussions with Pakistan to develop joint trade and investment relations.”

In 2020, Egyptian exports to Pakistan stood at $113 million, compared to $250 million in imports from the country. Pakistani investments in Egypt are estimated at $393 million, pumped in by 106 Pakistani companies based in Egypt, according to the Federation of Egyptian Chambers of Commerce.

Another goal behind Egypt’s increased overtures to Pakistan is countering Turkey’s influence, as Ankara is seeking a foothold in Islamabad.

In January, Turkish Foreign Minister Mevlut Cavusoglu visited Islamabad in a bid to revive economic and political relations between the two countries.

In February, Turkish President Recep Tayyip Erdogan also paid a visit to Pakistan, where he declared his country’s support for Pakistan and his keenness to enhance cooperation between the two countries.

The Egyptian Hafryat news site reported in February that Ankara is using the Muslim Brotherhood to wield influence in Pakistan, taking advantage of the 6 million supporters of the group in Islamabad.

Nadia Helmi, a professor of political science at the Beni-Suef University, told Al-Monitor, “After the dismissal of late President Morsi and the escape of many Muslim Brotherhood leaders to Turkey, Erdogan tried to use the Brotherhood relations with groups and organizations [in other countries], especially in Pakistan, to implement his agenda.”

“Turkey's policy toward Pakistan is essentially about undermining Egypt's interests,” she said.

Helmi argued, “Egypt wishes to help Pakistan in confronting extremist ideologies disseminated by pro-Muslim Brotherhood Islamist parties. [Egypt] plans to do so by sending imams from Al-Azhar to raise awareness in this regard. This would also strengthen Cairo’s influence in Pakistan and Asia and weaken obstruction by the Brotherhood.”

She added that cooperation between Cairo and Islamabad would allow the latter to consolidate its relations with Washington, within the framework of US efforts to restrict jihadist movements in Afghanistan after its military withdrawal, and thus “preventing the tide from pouring again into Syria, Libya and Iraq.”