At a meeting of the members of the US D-ISIS coalition in Rome, the US secretary of state makes appeal for "stabilization." 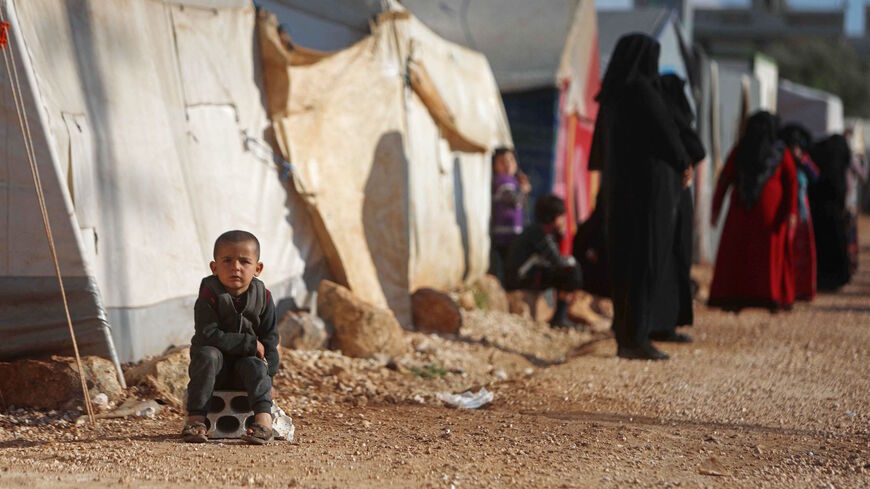 A child sits near displaced Syrians lining up to collect plates of food prepared by a local charity for the Ramadan fast-breaking meal at a camp for people displaced by conflict in the town of Sarmada in Idlib province, Syria, April 13, 2021. - Aaref Watad/AFP via Getty Images

US Secretary of State Antony Blinken met in Rome today with representatives of the 83-member coalition against the Islamic State (IS) to reinforce Washington’s stance on the conflict in Syria.

Blinken and Italy’s Foreign Minister Luigi Di Maio chaired the conference, the first such meeting under the Biden administration.

Current US officials have largely carried over the approach developed during the Trump administration, namely leaving US troops to indefinitely occupy oil- and agriculture-rich northeast Syria while economically isolating the regime of President Bashar al-Assad.

The policy remains in limbo amid indirect negotiations with Iranian officials in Vienna. Though strictly focused on fighting IS, the US military’s continued presence in Syria — and the State Department’s isolation policy toward Damascus — have been influenced by the ambitions of both Iran and Russia in the country and the wider region.

“Together, we must stay as committed to our stabilization goals as we did to our military campaign that resulted in victory on the battlefield,” Blinken said in Rome on Monday.

A Western official familiar with the meeting said little has changed since the last US presentation on the conflict. Joey Hood, the State Department’s acting top policy official for the Middle East, told reporters last week that Blinken would call in Rome for a nationwide cease-fire in Syria.

While the frontlines of Syria’s conflict have largely frozen over, a renewed push by Russia and the Assad regime against opposition-held Idlib province would immediately worsen the country’s humanitarian catastrophe.

Left with few options and little leverage in the complex, stalemated war, US officials led by White House coordinator for the Middle East Brett McGurk have been fine-tuning the policy to reduce the potential for inducing additional humanitarian harm.

Meanwhile, the Biden administration is seeking potential avenues toward compromise with adversary Russia. Earlier this month, the Treasury Department announced a sanctions exemption for COVID-19 relief for Syria, Iran and Venezuela.

Among Blinken’s top priorities at the meeting was the upcoming vote in the Security Council to renew the UN’s mandate to deliver cross-border aid into Syria from Turkey. Russia has sought to block such aid, insisting that the Damascus government only deliver the aid, citing Syria’s sovereignty. But the Assad regime has used food and medical aid as a tool of war, critics of the Kremlin’s approach point out.

Also discussed on Monday was the simmering crisis of 10,000 captured IS fighters who remain in makeshift prisons run by Kurdish-led forces in northeast Syria. Another roughly 50,000 IS family members live in squalid internment camps.

Several thousands are foreign nationals who joined IS in Syria, but few countries in Europe — with the notable exception of Italy — are willing to take them home for reasons of perceived political liability.

“This situation is simply untenable. It just can’t persist indefinitely,” Blinken said on Monday in Rome.

The top US diplomat praised Italy, Finland as well as Balkan and Central Asian states that have repatriated nationals from detention in northeast Syria.

The problem of lingering IS camps has raised concern among the high echelons in the US military. The head of all US forces in the Middle East, Gen. Kenneth “Frank” McKenzie, has repeatedly sought to draw public attention to the crisis, saying it will become a “military problem” if the detainees are left indefinitely.

Roughly half of Syria’s population has been displaced by the conflict. An additional 100,000 people were displaced when former US President Donald Trump’s administration opted to allow Turkey’s military to attack Syrian Kurdish fighters receiving US support against IS.

More than 500,000 people have been killed since broad swaths of Syria’s population rose up against President Bashar al-Assad in 2011. The Assad regime cracked down hard, killing protesters en masse and initiating a civil war that now stretches in its 10th year.

The United States intervened militarily in 2014 to fight IS. Now, two years after the jihadist pseudo-caliphate surrendered its last territory to the coalition, US forces continue to train Syrian Kurdish-led militias and Iraqi security forces to maintain stability and hunt down jihadist cells.

Facilities used by the remaining US forces in neighboring Iraq have repeatedly been hit by harassing rocket fire, and more recently by precision drone strikes, by suspected Iran-backed militias.

Earlier on Monday, Biden authorized airstrikes on three Iran-backed militia targets in Iraq and Syria in an attempt to deter further attacks.

The endgame for US troops in Syria is not clear. The United States insists that the Assad regime must make substantial political reforms before pressure on his government is released, but the regime — backed by Russia’s military since 2015 — has not signaled outward willingness to comply.

US troops at the isolated al-Tanf base in Syria’s southeastern desert also inhibit Iran-backed militia movement into the country.

Though largely defeated in battle in Syria and Iraq, IS affiliates continue to gain strength in sub-Saharan Africa, a problem that Italy’s foreign minister today called "alarming.”