The Egyptian government is rethinking that ministries should have oversight to maintain and protect the sites. 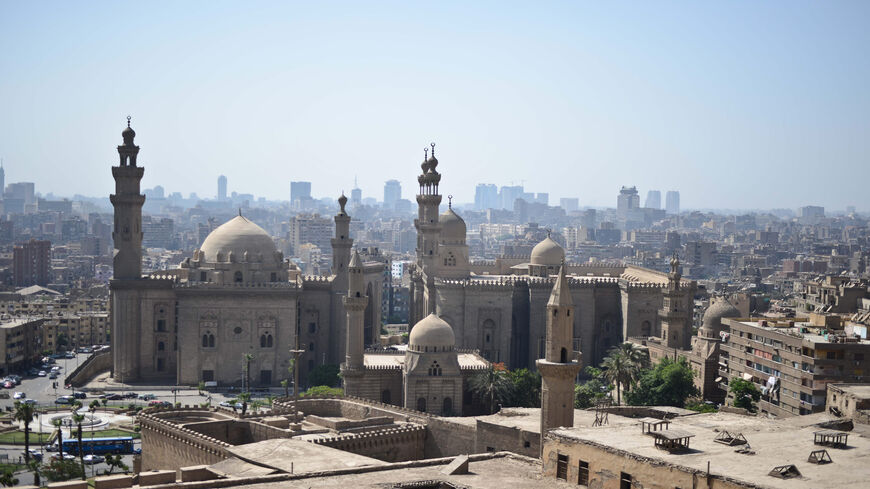 CAIRO — A part of the wooden flap of the ablution fountain dome of Sultan Hassan Mosque in Cairo fell May 28, prompting a group of archaeologists and architects to inspect the fountain and begin restoration works.

Osama Talat, head of the Islamic, Coptic and Jewish Antiquities Department at the Supreme Council of Antiquities, who is leading the group, said in a statement published on the Egyptian Foreign Ministry Facebook page that the broken part is not part of the original wooden flap that was renovated in the last century. The Arab Antiquities Preservation Committee replaced the dilapidated, authentic flap with a new one that is currently in the mosque, after the old one fell due to erosion and passage of time.

The renovation of the modern wooden flap’s broken part was completed June 2.

At Al-Rifai Mosque, opposite the Sultan Hassan Mosque, the glass over the copper chandelier fell from the ceiling of the royal hall June 11. A team of restorers was immediately formed to inspect the broken glass and begin the restoration process.

These recurrent incidents sparked again the debate on the neglect of the historical mosques in Egypt and the lack of periodic inspection. This is not to mention the theft cases, which prompted member of parliament Ahmad Idris, a member of the parliamentary Tourism and Aviation Committee, to call June 12 for the formation of a technical committee made up of architects, experts and archaeologists whose mission would be to preserve the historical mosques.

Speaking to Al-Monitor, Idris said, “Historical mosques must be affiliated only with the Ministry of Tourism and Antiquities, because it is the only party to possess the appropriate techniques to deal with archaeological buildings, whether in terms of restoration or maintenance. The ministry has the experience to implement these projects [restoration and maintenance] and to place these mosques on the maps of tourist attractions in Egypt.”

He explained that the reason behind these recurrent incidents is that most of the mosques are located in “popular neighborhoods, where the residents usually lack the cultural knowledge of these archaeological monuments and do not know how to preserve them.”

He added, “There is also a lack of specialized supervisors to follow up and spot any damage in the mosques and to respond to such incidents."

Abdel Rahman Rihan, director general of the Department of Research, Archaeological Studies and Scientific Publication in South Sinai affiliated with the Ministry of Tourism and Antiquities, told Al-Monitor, “The overlapping tasks between the ministries of tourism and religious endowments hinders any attempt to preserve archaeological mosques.”

He said that the archaeological mosques affiliated with the Ministry of Religious Endowments are visited by antiquity inspectors daily during working hours.

“But outside working hours, the ministry must also be responsible for any damages,” Rihan said.

He added, “The solution to the crisis of recurrent damages in Egypt’s historical mosques is to pass law to protect these mosques by completely placing them in the care of the Ministry of Tourism and Antiquities without any overlapping tasks with the Ministry of Religious Endowments — the role of which should only be limited to the religious part and the holding of religious services.”

On March 11, 2019, Minister of Tourism and Antiquities Khaled al-Anani announced that legal amendments were made to save historical mosques that were also subject to the Ministry of Religious Endowments at the same time.

According to the statistics of the Islamic, Coptic and Jewish Antiquities Department of the Supreme Council Antiquities, Egypt has 349 archaeological mosques.

Moaz Lafi, an archaeological researcher, believes that the state of neglect and chaos plaguing these mosques is because of a lack of a supervising technical committee for every mosque, responsible for inspection and restoration works.

He told Al-Monitor, “The wooden flap at the Sultan Hassan Mosque was already restored by the Arab Antiquities Preservation Committee in the [last] century. But because of wearing down and without any supervision or inspection, part of the restored flap fell off in May. The Ministry of Tourism and Antiquities carried out restoration works within days without checking if the entire flap needed to be changed.”

Lafi said that the other incident at Al-Rifai Mosque was the result of neglect, which caused part of the glass covering of the chandelier to fall.

“There should be periodic reports and inspections within these mosques, otherwise, dangerous incidents like these would continue to occur,” he added.

He noted that the overlapping tasks between the two ministries of tourism and endowments is also a problem.

“This is not to mention that the Ministry of Religious Endowment does not take into account that these mosques are archaeological monuments and not just regular buildings, and thus ought to be more cautious in dealing with them,” he said.

Lafi concluded, “The imams of these mosques should only be appointed after receiving proper training on the historical and archaeological value of these mosques, which appear on Egypt's tourist map. It is very important to preserve them.”