More Syrian refugees are expected to return home from Turkey this year if the Turkish authorities continue to impose lockdowns to curb the spread of COVID-19. 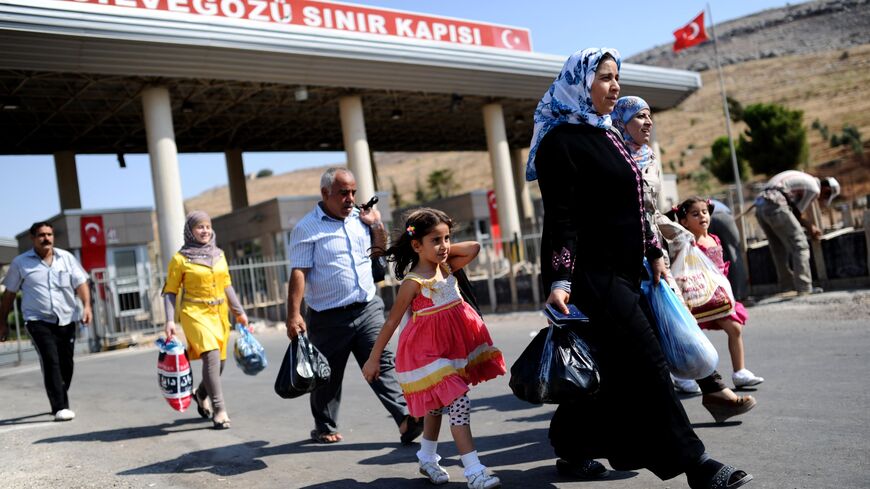 Syrian refugees arrive in Turkey from the Cilvegozu crossing gate at Reyhanli, in Antakya province, on Aug. 30, 2013. Now, because of coronavirus pandemic issues and for other reasons, many Syrians, particularly young people, are returning to their home country. - BULENT KILIC/AFP via Getty Images

ALEPPO, Syria — Over the past few weeks, the number of Syrian refugees voluntarily leaving Turkish lands and heading back toward opposition-controlled areas in northwestern Syria has increased. Young people started flocking back home to Syria after Turkish President Recep Tayyip Erdogan announced tighter measures April 26, including a full lockdown in Turkey, to curb the spread of COVID-19.

Almost every day since, large numbers of Syrian refugees have gathered in front of the immigration office in southern Turkey's Hatay province, where they hand over their temporary protection cards and then head to Syria through the Bab al-Hawa border crossing controlled by the rebel group Hayat Tahrir al-Sham in Idlib province. Bab al-Hawa is the only Syrian crossing that welcomes back refugees returning voluntarily because of the difficult conditions, including unemployment, that they face.

A 24-year-old Syrian refugee who recently returned from Turkey to Idlib told Al-Monitor on condition of anonymity, “I used to work in a sewing workshop in the city of Gaziantep in southern Turkey, but I lost my job when the prevention measures were imposed, due to the lockdowns and a lack of demand for clothes. All the money I had saved in recent years [before the coronavirus pandemic] I spent on living expenses and paying rent.”

He added, “A group of my Syrian friends and I decided to return to Syria after the recent lockdown decision in Turkey. The majority of the Syrian refugee young people in Turkey work in restaurants, cafes, construction, sewing and embroidery workshops, many of which have completely closed. We are no longer able to secure income for housing and living expenses, so we decided to hand over our temporary protection cards and head to Syria.”

Yahya al-Sayed Omar, a researcher and head of the newly established Center for Economic Studies in Istanbul, which is close to the Syrian opposition, told Al-Monitor, “The number of Syrian refugees returning from Turkey has increased remarkably. Data indicates that thousands of Syrians returned voluntarily in 2020 and there may be others who returned through illegal crossings, meaning that the number may be greater.”

Speaking about the increase in the pace of return, Omar said, “We can attribute it to several reasons, the most important of which is the increase in economic pressures, especially after the sharp decline in the Turkish lira's exchange rate and the lockdown measures. The current lockdown is considered more burdensome for Syrians than others; the Turks may get their salaries regardless of the closure, especially those who legally work in the public or private sector, while the majority of Syrians will have no income, which has a severe impact on them since most of them have rent to pay, but no money to pay it.”

He added, “The relative improvement in the economic and security situation in the Syrian opposition areas is one of the important factors that encourage refugees to return."

Omar said, “The increasing social tension in the cities of southern Turkey, which have the largest number of Syrians, constitutes an additional factor in pushing refugees to return. For example, several months ago, paper pamphlets were published inciting [locals] against Syrians in Turkey. In addition, local Turkish artists in Gaziantep have indirectly incited against the Syrians, questioning why refugees would not return home since the war is over in their country.”

Mazen Alloush, director of the media office at the Bab al-Hawa border crossing with Turkey, told Al-Monitor, “Over 700 refugees, mostly young Syrians, passed through the crossing coming back from Turkey to Idlib in the past couple of days. The voluntary return does not stop throughout the year, but it has recently increased.”

Abdul Hakim al-Masri, the minister of economy and finance in the Syrian opposition's self-styled interim government, told Al-Monitor, “The refugees returning from Turkey to Syria are stranded. Some of them have stopped working and no longer have a source of income, and others have failed to seek asylum in Europe, and consequently, their return to Syria is an inevitable option. In opposition-controlled areas, for instance, the spending rate is lower than in Turkey, and people do not need much to live here. I believe they can find job opportunities no matter how scarce they might be, such as joining the ranks of the factions and the police, and whoever has a university degree can work in education and humanitarian organizations.”

Radwan al-Dibs, Syrian opposition researcher who lives in Istanbul, Turkey, added, “Refugees who return find jobs in opposition-controlled areas; many young refugees [still in Turkey] might find it tempting to take that same decision and go back to Syria.”