Israel said Hamas assets were in the building, but US Secretary of State Antony Blinken said on Monday he has yet to see evidence of this. 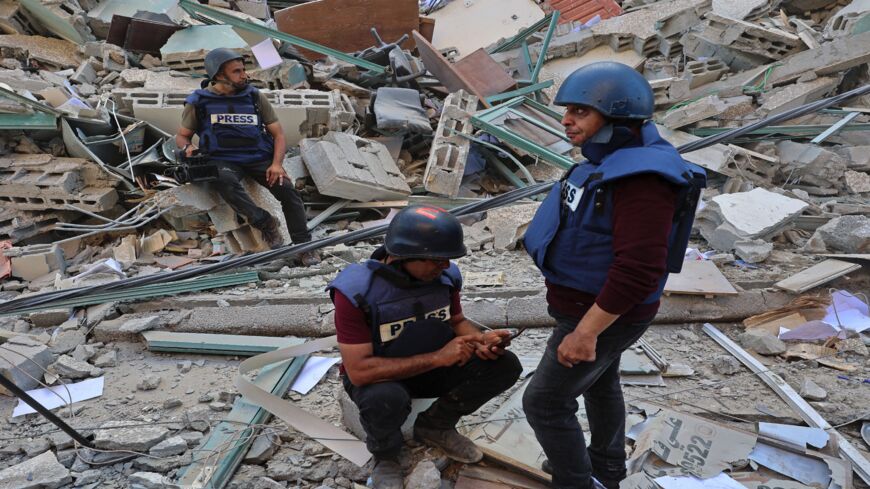 Journalists sit on to the rubble of Jala Tower, which was housing international press offices, following an Israeli airstrike in the Gaza Strip on May 15, 2021. The airstrike demolished the 13-floor building housing Qatar-based Al Jazeera television and American news agency The Associated Press. - MOHAMMED ABED/AFP via Getty Images

The fallout from the Israeli airstrike that destroyed a Gaza building hosting international media outlets continued today when the top US diplomat addressed the issue.

On Saturday, an Israeli airstrike destroyed a high-rise building in Gaza that hosted The Associated Press, Al Jazeera and other media outlets. Israel warned the journalists beforehand and they evacuated and said that Hamas military assets were inside.

The Associated Press said following the strike they had not seen any evidence of the Israeli claim and called for an independent investigation.

The controversy continued on Monday. US Secretary of State Antony Blinken spoke with AP CEO Gary Pruitt and “expressed relief that The Associated Press team on the ground in Gaza remains safe,” according to a statement from State Department spokesman Ned Price. Blinken did not condemn the strike.

The Israeli newspaper The Jerusalem Post reported on Monday that the Israeli government shared intelligence with the United States showing that Hamas operated inside the building.

“Shortly after the strike, we did request additional details regarding the justification for it,” he said. “I wouldn’t want to weigh in on intelligence matters in this forum.”

Adding to the controversy, some pro-Israel social media users unearthed a 2014 article in The Atlantic from former AP reporter Matti Friedman on the issue following the airstrike. In the piece, Friedman alleged that Hamas had launched rockets from near AP office’s and sometimes entered the office and threatened staff.