UN Secretary-General Antonio Guterres called on Israel and Hamas to allow for mediation efforts to end the worsening conflict. 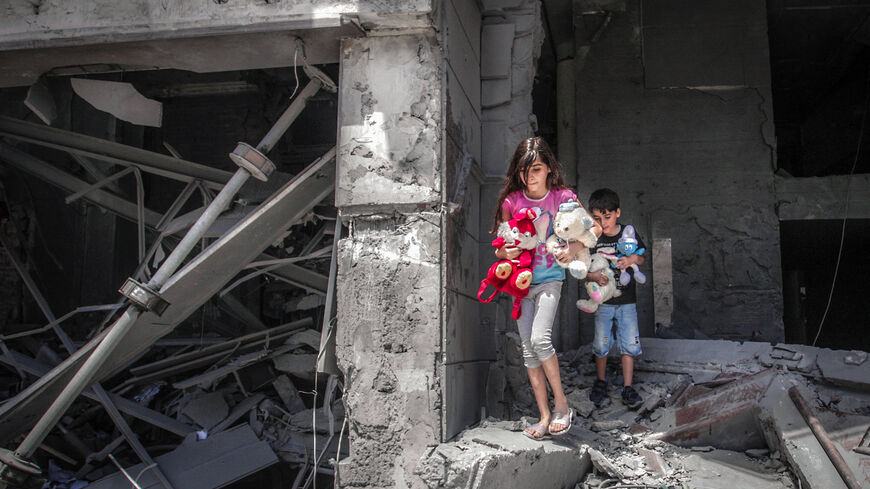 Palestinian children salvage toys from their home at the Al-Jawhara Tower in Gaza City's Rimal neighborhood, which was heavily damaged in Israeli airstrikes, on May 17, 2021. - ANAS BABA/AFP via Getty Images

“The past 10 days have witnessed a dangerous and horrific surge in deadly violence in the occupied Palestinian territory, particularly Gaza, and in Israel,” Guterres told a special meeting of the UN General Assembly.

“I am deeply shocked by the continued air and artillery bombardment by the Israeli defense forces in Gaza,” he said, adding that he was particularly concerned over the reports of child casualties in the Palestinian enclave. “If there is a hell on earth, it is the lives of children in Gaza.”

At least 65 children are among the 232 Palestinians to have died in the Israeli bombing campaign, according to the Health Ministry in Gaza. Since the militants’ rocket attacks began, 12 people have died in Israel, including two children.

Across Gaza, at least 50 schools in the Gaza Strip have been damaged in the strikes, Save The Children said Wednesday, and schools in southern Israel remain closed amid the continued rocket fire from Hamas and the Islamic Jihad group.

The UN chief also called on Hamas and Israel to “allow for mediation efforts to intensify in order to bring the fighting to an end.”

International mediators including Qatar and Egypt, which have direct relations with Hamas, are pushing for a truce. The US administration dispatched State Department official Hady Amr to push for calm and has expressed support for a cease-fire.

In a call with Prime Minister Benjamin Netanyahu on Wednesday, US President Joe Biden said he “expected a significant de-escalation.” That same day, Netanyahu ruled out setting a time frame for the conflict, telling foreign diplomats, “We’re not standing with a stopwatch.”

Despite Netanyahu’s tough talk, there appears to be some progress behind the scenes. Citing an unnamed official, Israeli public broadcaster Kan reported on Thursday that Israel’s security cabinet will vote in favor of declaring a unilateral cease-fire that will go into effect within 24 hours.