The WHO wants a Tunisian hidden camera prank show that purports to show people dying or falling seriously ill after taking COVID-19 vaccinations taken off the air. 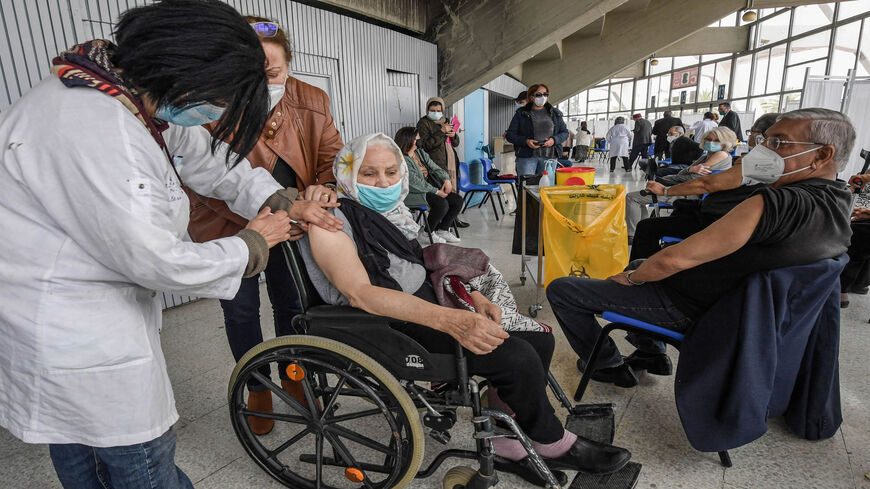 TUNIS, Tunisia — A Tunisian hidden camera prank show that stages fake side effects of the coronavirus vaccine has drawn criticism from health authorities, as the country experiences a surge in virus cases and struggles to convince citizens to get vaccinated.

The series, titled "Angelina19," features a lookalike of actress and UN goodwill ambassador Angelina Jolie who claims to have brought thousands of approved COVID-19 vaccine doses to Tunisia.

In each episode, Tunisian celebrities are invited to be vaccinated as part of an awareness campaign. As they wait to receive their shot, a chaotic scene emerges as other supposed vaccine recipients pretend to collapse and fall fatally ill in front of them.

The World Health Organization (WHO) wrote a letter to the Tunisian government calling for the series to be pulled off the air because it could “undermine public confidence in the vaccine.” Tunisia’s national order of doctors told its members not to participate in any show that could hurt the “national vaccination effort.”

The producer of "Angelina19," Walid Zribi, told Al-Monitor that the program will “continue broadcasting every day” and called efforts to ban it “shameful in a country whose constitution provides for freedom of expression.”

“While Tunisia is going through an unprecedented health crisis with not enough resuscitators, some are taking advantage of people’s fears to create a buzz,” Tunisian anesthesiologist and public health advocate Mohamed Ghedira told Al-Monitor. “The hidden camera show 'Angelina 19' should have been interrupted after its first episode.”

Tunisia, which was praised for its early success in combating COVID-19, has struggled with its vaccine roll-out and the number of infections have been rising.

Last week, Jalila Ben Khalil, a member of the country’s Scientific Committee for the Fight Against COVID-19, warned that the health-care system is on the verge of collapse, while intensive care workers reported that units are totally full.

The country’s vaccination drive has been bogged down by short supplies and public skepticism. As of May 28, only around 70,000 people — 0.6% of the country’s population — had been fully vaccinated, compared to a global average of 3.2%, and less than 20,000 doses were being administered per day. A survey in February found that only 41% of the Tunisian public and 65% of medical workers were willing to be vaccinated.

Ghedira said that medical misinformation and conspiracies spread on social networks and in the media are making the problem worse.

“In Tunisia, as elsewhere in the world, there is a segment of the population that remains skeptical about vaccination against COVID-19,” he told Al-Monitor. “This skepticism is fueled in particular by conspiracy theories and false information about imaginary adverse effects related to vaccines.”

Zribi said that "Angelina19," which includes a message at the beginning of each episode encouraging citizens to get vaccinated, has nothing to do with the government’s struggle to address the health crisis.

“If this program affects the vaccination campaign directly, there is no doubt that there is something wrong with the health system collectively, locally and internationally,” Zribi told Al-Monitor.

In 2018, "Shalom," also produced by Zribi, was ordered off the air for allegedly promoting “normalization with the State of Israel,” which is considered a crime in Tunisia.

This year, another hidden camera show — “The Circus” — has fueled anger from animal rights advocates because it uses a defanged lion to prank guests.

Many are calling on Tunisia’s audio-visual regulatory board HAICA to crack down on programs they feel pose a danger to public health, but it remains to be seen what action the authority will take.

“It is up to HAICA to mobilize in order to put an end to TV programs that feed on sensationalism and … endanger people’s lives,” Ghedira said.

A WHO spokesperson told Al-Monitor that the organization is continuing to work their “governmental partners,” including the Health Ministry, Foreign Ministry and HAICA in order to address concerns about the potential health impact of "Angelina19."